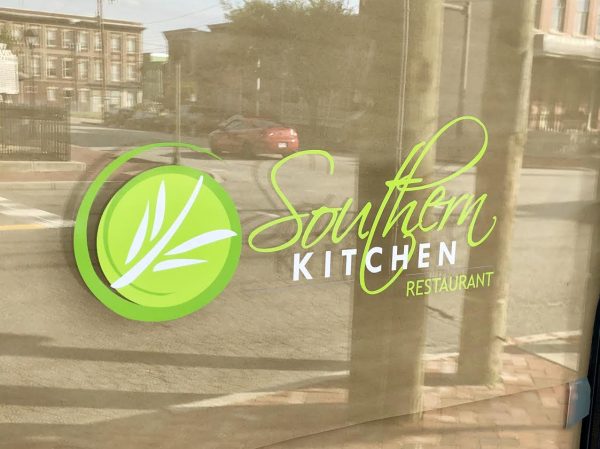 Southern Kitchen is relocating from Shockoe Bottom to Jackson Ward to occupy the ground floor of the Eggleston Plaza development at 541 N. Second St. (Photos by J. Elias O’Neal)

With its residents in place, a 2-year-old mixed-use development in Jackson Ward is preparing to bring some new flavor to the neighborhood.

Eggleston Plaza has signed its first commercial tenant, luring restaurant Southern Kitchen out of Shockoe Bottom to its ground-floor space at 541 N. 2nd St., according to an ABC notice in the window.

Founded by Shane Thomas, Southern Kitchen was established about five years ago at 1726 E. Main St. in the Bottom, serving up a variety of southern fare such as chicken and waffles, and chicken liver and onions.

Thomas, who will serve as executive chef of the establishment, would not comment about the pending opening of the restaurant.

The four-story Eggleston Plaza, which includes 31 income-based apartments, was developed near the corner of North Second and East Leigh streets in 2017 by Kelvin Hanson, owner of The Hanson Co. 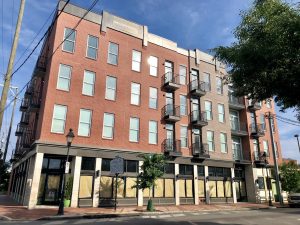 Eggleston Plaza sits atop the former site of the Eggleston Hotel, which for decades was a premier hotel for African-American travelers in Jackson Ward.

Southern Kitchen’s arrival would bring back to life the Eggleston property’s rich past of Southern hospitality and comfort food.

The project sits atop the former Miller Hotel site, which opened in 1904 and was one of a handful of hotels that catered only to African-Americans in the Jim Crow South, according to historic records.

The hotel later was renamed the Eggleston Hotel in the late 1930s, and was owned by Neverett A. Eggleston Sr., who also operated a restaurant on the ground floor.

Sitting across the street from the Hippodrome Theater, the Eggleston Hotel hosted a multitude of seasoned black musicians, comedians and athletes, including Ella Fitzgerald, Duke Ellington, Redd Foxx and Jackie Robinson.

The hotel also was featured in the 1947 edition of “The Negro Motorist Green Book,” a travel guide of African-American friendly hotels, restaurants and tourist destinations that became a crucial resource to black travelers in the segregated South.

Eggleston Hotel would continue on as a Jackson Ward mainstay through the 1960s, according to historic records. But it lost customers as Jim Crow laws were overturned, and interstate highways — which were bore mostly through the city’s black sectors such as Jackson Ward and Carver Community — led to the suburbs.

By the 1970s, the 30-room hotel was rented out by the week as apartments – wallowing into the descent of downtown decay during that era. By the 1980s, the property sat mostly vacant.

The site was razed in 2009 after part of the hotel, long abandoned by that time, collapsed – allowing Hanson Co. to buy the property and construct Eggleston Plaza in its place.

Hanson did not return a call for comment Thursday.

The Croaker’s Spot, which was launched in Jackson Ward in 2001, was supposed to take the ground floor of the new building, but plans to return to its origins never materialized. 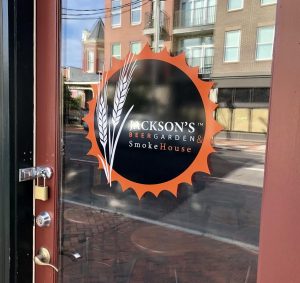 Padlocks have been installed to the Jackson Beer Garden & Smokehouse at 119 E. Leigh St.

Southern Kitchen’s move into Jackson Ward comes as additional eateries have come and gone, including most recently Jackson Beer Garden & Smokehouse, which has had a sign in its door stating that it’s closed for renovations.

Other new restaurants that have popped up in the neighborhood over time include Salt & Forge, Soul Taco and Fighting Fish.

Not sure why Southern Kitchen is moving. The fact that most places at Leigh and 2nd Streets have last less than 3 years in the area should tell them something. Maybe the new apartments will help but this corner of Jackson Ward has less parking and foot traffic than the Bottom. And with Coliseum’s closure that means few and few customers for your business. Hopefully their great food, and its is GOOD, will bring customers over and keep them around.

I beg your pardon, I believe you are blowing smoke with the statement regarding places closing along the stretch of 2nd street. Care to mention who you are referencing?
Most restaurant retailers who have joing the 2nd street stretch have been welcomed and successful, and remain open.

Oksy you said the same back when I talked about Jackson so here you go Ashley. Jackson Beer Garden and Smokehouse, and Croaker Spot (mix on bad business model and some illegal non-tax collecting) can be the starting place. Ettamae, Thai Corner, Bodizza all closed quickly, CulturedSwine and IdleHands moved after just 1 year in the area. Sideways Bistro, Andle Taco Shop, and Estes BBQ never made it a year either. And Salt and Forge closes at 4pm and Big Herms which is across 2nd is great is open only until 6pm (weekdays only). So no dinner services. Did the… Read more »