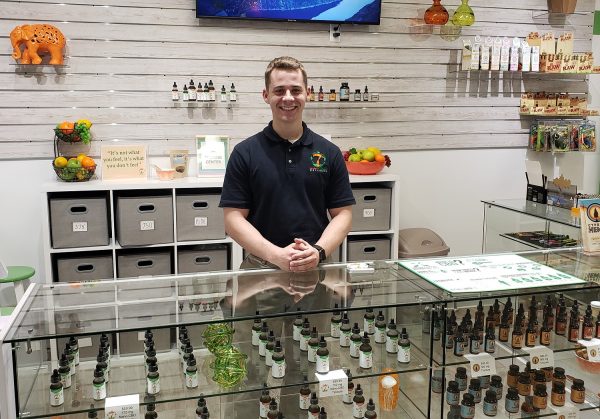 Gavin Kilby at his store in Chesterfield. (Photos by Josh Cozine)

Inspired by his father and funded in part by his sister, Gavin Kilby cited family values as the impetus for launching Chesterfield’s latest cannabidiol (CBD) retail shop.

Kilby’s 7th Letter Wellness opened in its 900-square-foot space at 14850 Hull Street Road on May 18, selling hemp-based CBD products such as oils, tinctures, edibles, vaporizer liquids and products for pets.

Since opening, Kilby said it has made more than $25,000 worth of sales through the storefront as well as online sales.

“We’ve done very well,” Kilby said about his first few weeks. “But I don’t want to make it look like we’re making a lot of money because there was a lot of money that went into this.”

Along with some of his own savings, Kilby also got help funding the venture from his sister in Texas. The business, at least for the time being, remains entirely family-owned.

“We’re figuring out our options,” Kilby said. “We’ve had a lot of people offer us opportunities, but we’re making sure we do it the right way.”

At 22, Kilby already had some experience in the field, having worked in the cannabis industry in California’s Apple Valley before he moved back home to Virginia to be with his father, who was diagnosed with congestive heart failure.

“We became interested in the CBD industry after personally seeing our father go through all these different (health problems). He was suffering from addiction to prescription drugs, and CBD is just a superior alternative.”

Through using CBD as a supplement, Kilby said his father has been able to cut back on his dosage of opiates and NSAID-type pain relievers.

There were some initial hoops to jump through to open the store, which is named for the first letter in Kilby’s first name – “G” being the seventh letter of the alphabet.

Legally, to make and sell any CBD products in Virginia, the product must be tested to contain less than three hundredths of a percent of THC — the psychoactive component of the cannabis plant that is responsible for the “high” effect most people associate with marijuana.

Kilby had to submit multiple lab results in order to obtain a license from the state to sell CBD products. He preferred not to disclose to BizSense the name of his CBD supplier, but makes results from third-party lab studies on his products available online and in the store to anyone who asks. 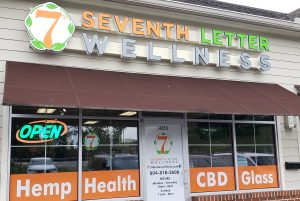 7th Letter Wellness is at least the second CBD shop in Chesterfield.

7th Letter Wellness is at least the second CBD shop in Chesterfield, following the opening of Kultivate Wellness in the Village Marketplace shopping center in December. Both stores offer CBD products free of THC and derived from hemp. That’s unlike a proposed development off Decatur Street in Manchester that would offer marijuana-derived CBD, using a coveted state license made possible by legislation the General Assembly passed last year.

Some people may argue that hemp-based CBD may not actually provide any medicinal effects, and the products offered have not been evaluated by the FDA to diagnose, cure or treat any specific ailments.

Kilby admits it can be hard to measure the effectiveness of CBD, as it can work differently for different people, but said it has helped alleviate symptoms for many of his customers while not affecting them in any other way as marijuana would.

“It’s not what you feel,” he said, echoing a framed quote that sits on a desk behind the shop’s main display case, “it’s what you don’t feel.”