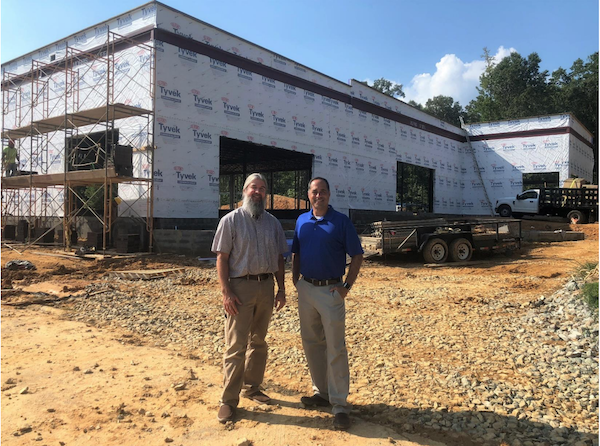 More details have emerged about a new brewery coming to Powhatan County.

The duo signed a lease for the space in May, but waited to secure funding and other details before going public with their plans. They hope to open in late 2019 or early 2020.

With construction on the brewery now underway and other loose ends tied up, Miller discussed their plans last week with BizSense.

Miller and Torrez, alums of Radford University and Virginia Tech, respectively, are friends of over 20 years. They met while working at a local engineering firm and kept in touch through the years.

Miller said he was a homebrewer in the early 1990s and got back into it in recent years. In late 2016, he was contemplating a career change, and figured Powhatan had room for a brewery.

“It just kind of hit me – why not explore opening a brewery in Powhatan?” Miller said. “I felt there was a niche where we can fit in. We’re not trying to compete in the bustling brew scene in Richmond. There was a spot in that west-of-Richmond area.”

Crazy Rooster would be the second brewery in Powhatan, joining Fine Creek Brewing Co., which opened in 2017 at 2425 Robert E Lee Road. 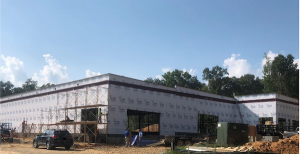 The building Crazy Rooster is beginning to go vertical.

Miller and Torrez began writing the business plan, which included sending Miller to the University of Richmond’s brewing certificate program. Crazy Rooster is named for both Powhatan’s rural areas and lyrics in the Grateful Dead song, “The Music Never Stopped”.

“I have a long-time affinity for the Grateful Dead, which you’ll see throughout our beer names and design,” Miller said. “But anyone who lives in a rural area in Powhatan knows about the roosters. It’s a tie-in to the agriculture scene with the Dead.”

Miller said the Crazy Rooster is going to focus on traditional styles of beer such as ales and lagers.

“We want to focus on getting back to the basics of brewing with brown ales, red ales and pilsners,” he said. “We’ll definitely have some hazy IPAs, but that won’t be our focus. Maybe down the road we’ll dabble in sours, but not to begin with.”

Crazy Rooster will have up to 12 beers on tap. Miller said they’ll package some small runs of cans and bottles to be sold at the taproom, with plans to do some small local distribution to Richmond-area restaurants.

Crazy Rooster is going into a new 20,000-square-foot building, of which 9,600 square feet is available for lease. CBRE | Richmond’s Matt Hamilton and Eric Williford have the listing.

May the four winds blow you home again!

Would you mind shipping some my way… “from see to shining sea?”