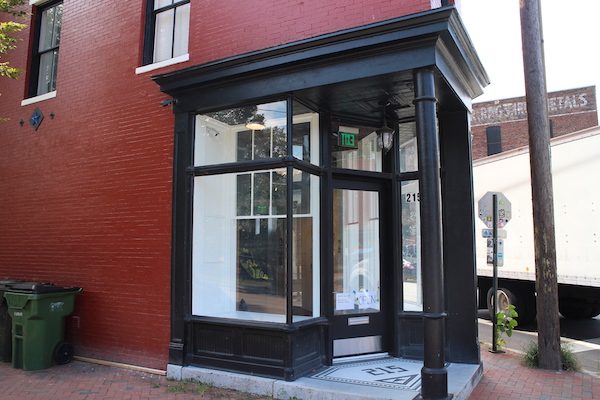 A new art gallery has arrived in Jackson Ward.

Owner Beto Hopper began renovating the property in 2017 after purchasing it for $425,000 a year earlier. Hopper said the build out, which included moving a staircase and gutting the building, was difficult. 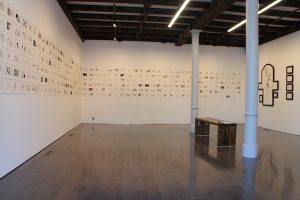 The triangular art gallery was formerly home to 30’60’90’ Studios. (Photos by Mike Platania)

“It’s been a couple of decades since real work was done on it,” Hopper said, adding that 510 Architects handled the design of the space.

30’60’90’ Studios, another art gallery, had occupied the space until summer 2016. Hopper said he wants Acute to be a place for lesser-known artists to show their works.

“Acute will show contemporary artists of all types,” he said. “A lot of small galleries don’t put money into their exhibits … I want it to be a professional place to show up-and-coming artists’ work.”

For its soft opening, Hopper’s own pen-and-ink works are on Acute’s walls. He said he’s working with another unnamed local artist to organize a group showing to go up later in the fall.

Acute Gallery also has an outdoors-facing interactive exhibit, a feature born out of need to preserve an old door on the building’s Brook Road-facing side in order to maintain the property’s historic designation. 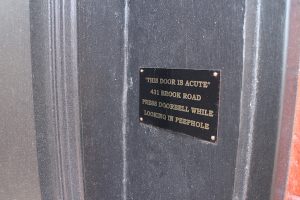 Hopper said he didn’t have plans to use the door, so he turned the peephole into a kaleidoscope that works when passersby press the doorbell. The exhibit is marked by a small sign that reads “This door is acute.”

Hopper said Acute has been listed on the First Fridays directory and he’s excited to finally have the gallery open. It joins neighboring Gallery5, which is currently under renovation.

“We’re on the northern edge of the Arts District, and with Gallery5, this block gets closed off on First Fridays. It’s exciting to be a part of that,” Hopper said.