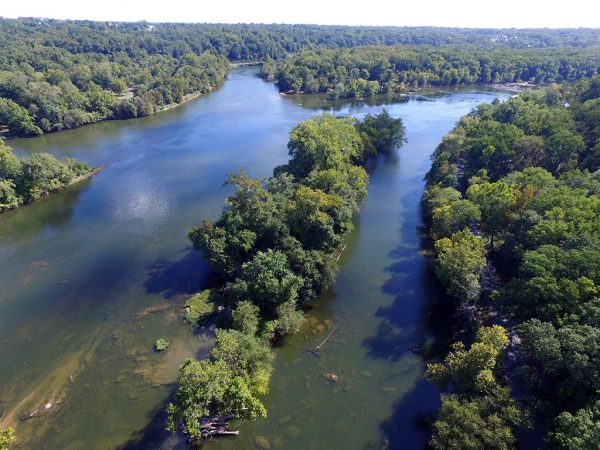 Goat Island is a small island about one-third mile upstream from the Z-Dam. (Michael Schwartz)

A local outdoors company looked to an unusual part of town for a real estate deal: the middle of the James River.

Riverside Outfitters last week purchased Goat Island, a small island about one-third mile upstream from the Z-Dam. It paid $11,000 for the roughly 1-acre land mass, which newly minted co-owner Scott Turner said got its name for the goats that used to live there.

Turner said they bought Goat Island from the Elletts, a family he’s known for years that lives in the neighborhood.

Based in Forest Hill, Riverside Outfitters offers guided kayak, raft, tube and paddleboard trips along the river, as well as gear rentals and youth camps. Turner founded the business in 2005 and earlier this year brought in Andy Thompson and Ryan Abrahamsen as minority owners.

While the company was the buyer, Turner said they plan to make the island openly available for public use, seeing it as a destination for canoers and paddleboarders.

“We’re not going to wrap our arms around it and say ‘Keep out,’” Turner said, laughing. “It’s not some business venture to capitalize on, this is just to create a playground that we feel comfortable sharing with the rest of Richmond.”

The only work that Riverside will do to the island will be cleaning it up and ridding it of invasive flora, and maybe returning some fauna to the island, if allowed.

“I wouldn’t be opposed to getting goats back out there if it’s legal,” Turner said.

Turner, who also owns Truetimber Arborists, said the island has three sycamore trees on it that he believes will pass inspection for climbing.

Goat Island is at least the second uninhabitable island on the James to sell in the last year – the other also having a tie back to Riverside Outfitters. Thompson last year led a group that bought Sharp’s Island, near the Mayo Bridge. The group has since listed the island for rent on Airbnb.

Funny, camping in illegal inside the City and Airbnb is illegal in the City; but I am sure the corrupt and inept City leadership doesn’t care and won’t address these issues. I would love to see both islands opened for tourism and camping/Airbnb use. Not sure why it is taking 3 years to get Airbnb issue addressed Instead they are trying to build a coliseum.