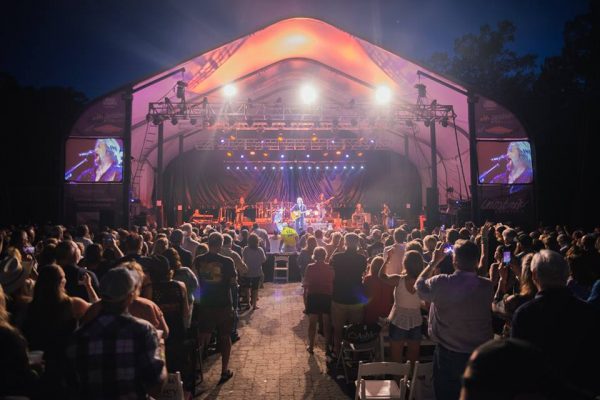 The owners of the Innsbrook After Hours brand and the land on which the concert series currently takes place want to make one thing clear: Live concerts will live on in the Henrico office park. They just might be presented in a scaled-down form and at a new location within Innsbrook going forward.

Innsbrook stakeholders sought to clear the air in recent weeks after reports that the promoters of Innsbrook After Hours, EventMakers-USA Inc., were looking to start a new concert series in the West Creek Business Park in Goochland.

Citing perceived confusion among members of the public, Yvonne Mastromano, executive director of the Innsbrook Foundation, and Jane DuFrane of major Innsbrook landlord Highwoods Properties, emphasized that the Innsbrook After Hours brand will continue to be used and won’t cease to exist just because EventMakers USA might be pulling out of Innsbrook.

Added DuFrane: “Innsbrook After Hours will continue. It will be ever-changing and evolving.”

Up until now, neither Innsbrook officials nor the heads of EventMakers USA had commented at length while EventMakers continued to go through the application process with Goochland County to potentially create a new series and new venue in West Creek.

The Goochland Planning Commission this month recommended denying EventMakers’ conditional use permit application to host the gatherings on a 5-acre site at 12575 W. Creek Parkway near the Richmond Strikers Field Complex.

The commission’s recommendation cited concerns about sound, traffic, parking and safety, and followed a sound test in surrounding areas. The matter will ultimately be decided by the county’s Board of Supervisors during its Oct. 1 meeting.

In explaining why EventMakers began to look elsewhere, DuFrane further clarified, explaining that Innsbrook After Hours, as it stands now under the direction of EventMakers, has grown beyond what originally was envisioned for the series in terms of size and reach.

She said the original goal for the concerts was to have an after-work offering for employees who work in in the sprawling office park.

“As it changed, more and more Innsbrook employees forewent going to the concerts and we were drawing from outside Innsbrook,” DuFrane said. “We’ve decided to rethink the series and go back to our roots … for more of a series that appeals to the people working in the park.”

Part of the relocation is being driven by Highwoods’ desire to potentially develop the land where the concerts are held at 4901 Lake Brook Drive. The company owns the 6 acres and has donated it to the Innsbrook Foundation to use for the series.

That comes as Innsbrook is in the early stages of an evolution toward more mixed-use development, to add residential density to the neighborhood.

And DuFrane said the Innsbrook After Hours land could be part of that continued evolution.

“We want to start planning for the future of the north end of Innsbrook,” she said. “We don’t have that ironed out, but what I do know is having this large concert series isn’t the best use of our land.”

DuFrane said Highwoods is in negotiations with the Innsbrook Foundation to keep a smaller-scale concert series going, likely in a more central location within the park, and potentially with a different promoter.

“The goal is to find a different permanent location, a more central location,” DuFrane said.

As the 2019 season of Innsbrook After Hours comes to a close, with one show remaining, Mastromano said she wasn’t ready to say what form the series will take in 2020.

“As far as next year is concerned, what exactly that’s going to look like, I’m not prepared to say,” she said.

If it’s for the workers in the office park, maybe they could consider starting it earlier, like 5:30 or 6:00, and finishing by 7:30. As it is now, you have to make a whole evening out of it and probably want to go home first and get changed.

Innsbrook really needs to change out attendees’ leftover “chits” at the end of the show or price everything in a way so that you don’t wind up with odd numbers of “chits”. It’s a terrible system unless it changed in the past year or so.

I wouldn’t mind a return to the early days of Innsbrook After Hours, when it was held right behind the property that’s now the Hilton Garden Inn. The “after-After Hours” party continued in restaurants and bars right around the corner, within walking distance. Seems to me that, unless crowds got rowdy and caused problems, it’d be great to have it in that area again and for those businesses to see an uptick in sales due to proximity.