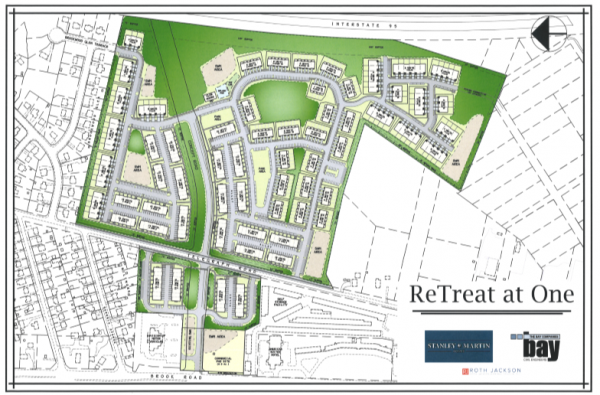 Encouraged by sales at one of its comparable developments a couple miles up the street, a homebuilder already juggling multiple projects in Henrico is looking to return to the county’s Route 1 corridor for its next multifamily community.

Reston-based Stanley Martin Homes is planning a nearly 500-home development on about 65 acres just off Brook Road, along the west side of Interstate 95 between Parham Road and Interstate 295.

Called “ReTreat at One,” the development would total up to 495 for-sale units, including three-level townhomes, “two-over-two”-style condos, and two-story villa-style homes. 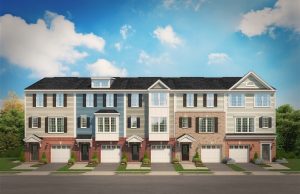 A rendering of the three-story townhomes.

The development would straddle Telegraph Road south of its intersection with Georgia Avenue, with the bulk of the buildings on the east side of Telegraph along I-95, and about 6 acres across Telegraph behind the DMV office at 9015 Brook Road. The smaller portion would accommodate a primary access road off Brook leading into the larger development.

Depending on final design, the community would include no more than 210 townhomes, 240 condos or 130 villas, according to documents filed with Henrico County. Whatever the final allotment, the total number of units would be restricted to 495.

Except for the villas, the development would consist of essentially the same housing product and price points as Stanley Martin’s Lakeside Landing, a 126-home community rising along Brook Road farther south beside the Brook Run shopping center.

Jeremy Swink, Southern region vice president of land for Stanley Martin, said sales at Lakeside Landing – about half of its planned units since sales started in February – encouraged the company to seek out another site along the corridor. 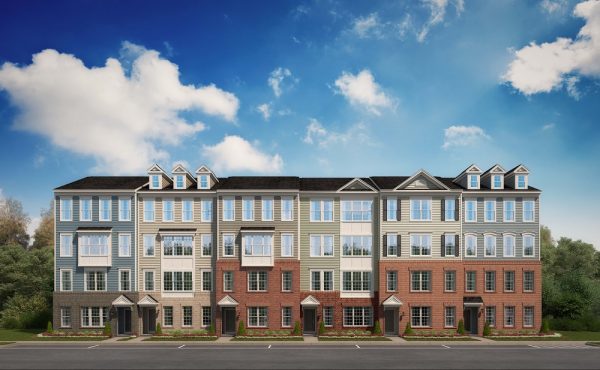 The “two-over-two”-style condos would be stacked in four-story buildings.

Similar to Lakeside Landing, the condo units at ReTreat at One would range from 1,500 to 2,400 square feet, with the larger floor plans making up the upper-level units. The two-level condos would be stacked in four-story buildings in the same “two-over-two” fashion as Stanley Martin’s previous projects, such as its Saunders Station at Broad Hill Centre in the Short Pump area.

The three-story townhomes with 20-foot widths would average about 2,200 square feet, while the two-level attached villas with first-floor master bedrooms would each total about 1,800 square feet. 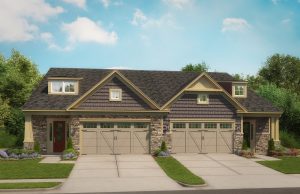 The villa-style homes would include two-car garages and first-floor master bedrooms.

Community amenities would include a clubhouse with fitness center, a “tot lot” with splash pad and playground, and walkways and sidewalks.

Swink said a development cost for the project has not been finalized. He said the company is under contract to purchase the land, which consists of about a dozen wooded parcels with various ownerships.

Stanley Martin is seeking a zoning change to accommodate the development, working with attorney Andrew Condlin of Roth Jackson Gibbons Condlin on the application process. Mechanicsville-based The Bay Cos. is providing engineering work.

The rezoning request was deferred from the county Planning Commission’s meeting last month. Swink said the company requested the deferral to meet with area property owners who were unable to attend a community meeting in August. A second meeting was being held this week, and the case is set to go before the commission at its next meeting Oct. 10.

While current zoning for the site calls for agricultural, office and industry uses, a county staff report describes the project as potentially appropriate as a transitional development between established single-family residential neighborhoods and commercial development along Brook.

The report notes neighbors’ requests for buffers or screening to minimize visual and noise impacts, and it states that the county would be more supportive of the project if it includes a connection point for potential future development to the south. Swink said the company is adjusting its plans accordingly.

According to the report, about 30 acres of the site were proposed in 2002 for a 172-unit development consisting of townhomes and houses, but that case was denied in part because it did not provide a connection to Brook Road. Stanley Martin’s proposal does, the report notes, going on to describe ReTreat at One as preferable for involving more land and reducing potential piecemeal development.

Swink said the connection to Brook Road is essential to the project, providing signage and visibility along the six-lane corridor south of Virginia Center Commons. He also described the location, in proximity to two interstates, as desirable for residents seeking quick access for commutes.

“Anytime you can have access to two major commuter routes like 295 and I-95 just down the street from one another, that gives people a lot of options to get to work and to go out,” he said.

Should the project receive approval as scheduled, Swink said construction likely would start by next fall, with buildings delivered based on sales.

At Lakeside Landing, where access to nearby I-95 was likewise cited as a driver, Swink said the first of seven buildings currently under construction was recently completed, with a second building about to come online. That project ultimately is planned for six condo buildings and eight townhome clusters.

By comparison, ReTreat at One could consist of about 23 condo buildings, 21 townhome clusters and 17 villa clusters, according to a conceptual site plan submitted to the county that is subject to change. The taller condo and townhome buildings would be centrally located, while the villas would be positioned on the north and south ends, providing a transition from adjacent neighborhoods.

The site plan also shows a 1-acre commercial pad site fronting Brook Road at the entrance to the development.

Elsewhere in Henrico, Stanley Martin is busy on two other developments along another of the county’s commercial corridors. About four miles to the west, site work has started on its 200-unit West Broad Landing condos at 7411 W. Broad St., where the former Lawrence Dodge dealership has since been razed. Nearby, the first buildings of its 160-home Wistar Glen community have started going vertical.