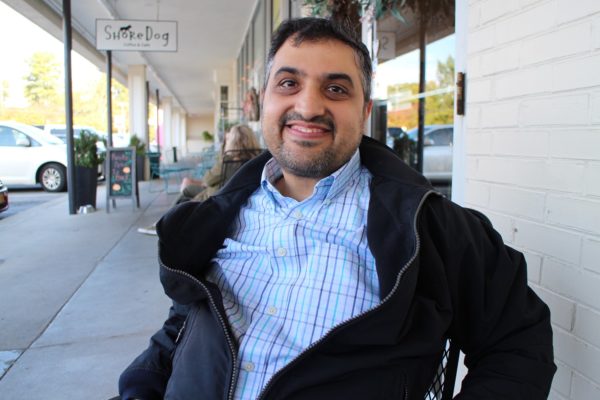 Roben Farzad is taking his “Full Disclosure” radio show to The National this weekend. (Jonathan Spiers)

Farzad, a former Bloomberg Businessweek writer who frequently appears on NPR programming, is recording a show this Sunday on the stage at The National, where he’ll be interviewing alt rock band Nada Surf before a live audience, followed by a concert performance – all of which will be documented by local filmmaker Lucas Krost. 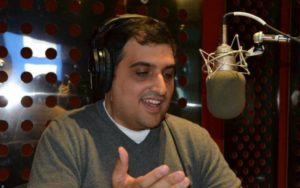 While not his first live show – he once interviewed restaurateur Peter Chang at The Hippodrome – the interview-concert at The National is the first of what Farzad hopes will become an ongoing series focusing on the business side of the music industry, from the perspectives of the artists.

“I love music, and we’ve already proven that my show has dining chops. I think that there’s a void for music,” Farzad said.

“What if we could do something that approximated ‘Austin City Limits’-meets-‘Inside the Actor’s Studio’? That’s really a dream of mine,” he said. “There’s so many bands with those crazy-ass stories. You contact them, and they don’t expect a business journalist.”

The concert picks up where Farzad started in September with an interview with David Lowery, the Richmond-based rocker who, after their Q&A at Richmond’s Rainmaker Studios, performed an acoustic set. 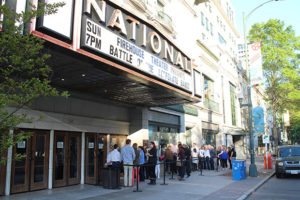 Perhaps best known from the bands Cracker and Camper Van Beethoven, Lowery also is an angel investor with a doctorate who lectures on the music biz at the University of Georgia. He’s also battled Spotify in court about artists’ compensation and music copyright – topics Farzad touched on in their interview.

And Farzad is keeping up the momentum, having lined up an interview in December with rock band Silversun Pickups.

“The musicians are up for it because I think that very few other people are going to take a crack at that biographical angle of their lives,” he said. “If you look at MTV ‘Unplugged’ in the mid-’90s, they would ask a question or two. I want to go deep into those rabbit holes.”

A Princeton graduate with an MBA in international finance from Harvard, Iranian-born Farzad, 43, arrived in Richmond seven years ago by way of his wife Karen, a nonprofit consultant who was born and raised here.

An encounter with EAT Restaurant Partners’ Chris Tsui at his Osaka restaurant led to introductions to Richmond’s Ukrops family and other supporters such as Steve Humble, then a Martin Agency exec who is now chief content officer at VPM, the public radio station that picked up “Full Disclosure” this year.

The weekly show, which Farzad said he’s expanding to three episodes a week, airs Saturday and Sunday evenings on VPM’s WCVE, and the podcast is part of NPR One, National Public Radio’s audio app. The podcast is produced locally at AudioImage Recording, a Monroe Ward studio run by John Valentine. 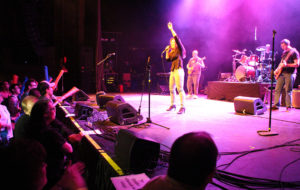 The National’s stage played host to Richmond’s Battle of the Corporate Bands in 2016. (BizSense file photo)

Farzad is expecting to lose money with Sunday’s show, which he said he’s putting on himself with support from VPM. He said he bought out The National to be able to put on the show, and is keeping ticket sales below 500 to ensure an intimate evening.

“Live shows like this, they tend to lose money,” he said, adding that his radio show is also running at a loss after paying booking expenses and his audio engineer.

Farzad said he wants the show to become “the next great public radio show,” a la NPR’s “Fresh Air” and similar programs. But that doesn’t mean getting fully picked up by NPR, he added.

“The business model is very much in question. Do you make a wonderful show and then syndicate it out to other stations? I’m not sure other stations are very wealthy to do this. I think this battle is going to be won and lost on digital,” he said. “We just need to make it great, and get great sponsors that want to back it.”

As for his push into music industry topics, Farzad said it’s a natural extension of his show’s brand, which he calls “the business of culture, and the culture of business.”

“Some strategists came in and said the through-line to a lot of your episodes is ‘how I hustled.’ That kind of works,” Farzad said. “Even someone like Erin (Powell) of Ginger Juice – that’s a story of a single mom who’s widowed, crowdsourcing. You can find all of these great chunks of business in fascinating human interest or entertainment stories, I believe.”