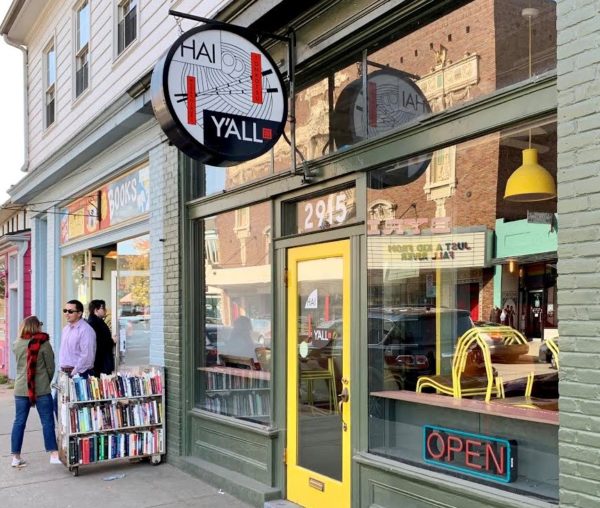 One noodle restaurant is out and another is sliding in at Carytown storefront.

Pho Luca is set to open in the recently vacated Hai Y’all ramen and dumplings spot at 2915 W. Cary St.

Hai Y’all closed late last month after a year of business. The restaurant, a joint venture between Andrew Friel and Home Sweet Home chef Sam Hall, had taken the space over from restaurant Best Friends Forever in June 2018.

“We don’t plan to do too much to what’s already there,” Pham said. “We’re going to obviously going to change the sign hanging out front and in the windows. Andrew did a great job with the appearance of the space, so that makes our transition into the space easy.”

This is the couple’s first restaurant venture in Richmond, although Pham is no stranger to pho.

Pham and his brother, Hoang, established Pho Vet Dem in the Little Saigon section of Houston in 2006. The restaurant, which they sold a few years ago and remains operational, is a late-night favorite for locals.

Pho Luca is a play off of Nguyen’s nickname, coined by customers during her tenure as an esthetician.

“We know that there are a lot of people that live in the area that are going to be looking for fresh options,” Pham said. “When we developed this idea for the restaurant, that was one of the many things we wanted to offer people.”

Mixed drinks, beer and wine also will be on the menu, Pham said.

The restaurant will seat about 42 people and hire eight to 10 employees.

Eventually, Pham said they would like to provide catering and delivery service through a third-party company such as UberEats or Inhouse. In the meantime, patrons who wish not to dine in can place their order for pickup.

As in Houston, Pham will keep Pho Luca open from 11 a.m. to midnight daily, Pham said.

“We wanted the later hours because there are a lot of students and working people that live in the neighborhood that may want something good to eat later,” Pham said. “We think that it will be a great addition to what’s already there.”

Pho Luca adds to a changing lineup of restaurants in Carytown.

Sisters Rosio and Karina Garcia of Little Mexico are planning to open their newest concept, Lolita’s, at 2929 W. Cary St.

Sauce And Toss, which debuted in Shockoe Bottom about three years ago, is expanding into Carytown with a second location in Derek Cha’s Carytown Food Court at 3300 W. Cary St. It will open Nov. 12, according to a sign on the property.