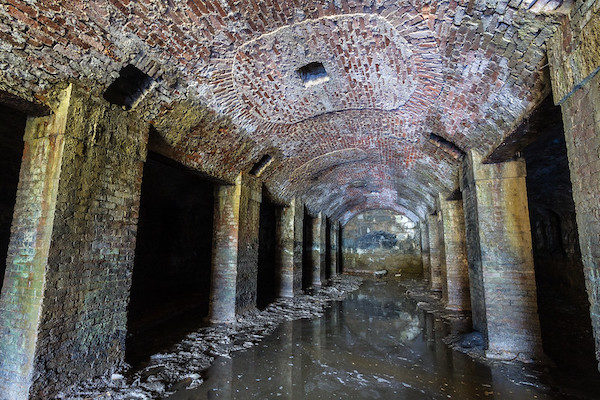 The 7,000-square-foot cellars have been eyed for breweries in the past but no deal has been struck, according to Cushman & Wakefield | Thalhimer. (Courtesy Chris Johnson Photography) 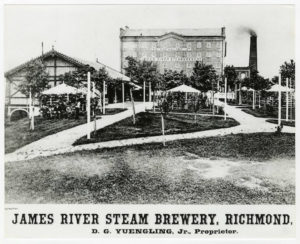 An old flier for the brewery from the 1800s.

The sign acknowledges the five-story, steam-powered brewery that was built after the Civil War in 1866 and was co-owned by David G. Yuengling, whose father started Pennsylvania-based beer giant Yuengling.

The James River Steam Brewery was destroyed by a fire 13 years after it was built, though its underground cellars remain intact.

Local nonprofit Richmond Beeristoric Inc. applied for the marker in February and provided the $1,770 needed to erect the sign. The marker is about two blocks north and uphill from the cellars, which face the river and the Virginia Capital Trail.

“Part of what we wanted to do is raise awareness of beer history in terms of how it’s interwoven with the tapestry of history in general,” said Lee Graves, president of Richmond Beeristoric.

“Richmond has history out the wazoo, and we love how much beer is a part of that story.” 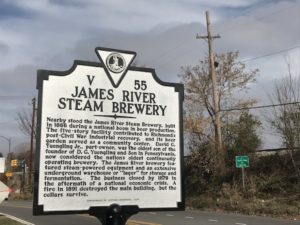 The Richmond City-Henrico County line is seen in the background from the new marker. (Mike Platania)

The Virginia Department of Historic Resources put up the roughly 3.5-by-3.5-foot sign that’s located near the intersection of East Main and Orleans streets, just east of the Henrico County line.

Some Yuengling managers were present for the unveiling, along with local brewery owners, including Neil Burton of Strangeways Brewing and An Bui of The Answer Brewpub.

Graves said local breweries supported getting the marker made, adding that it may help drive beer tourism to Richmond.

“Tourism is definitely part of the equation,” he said. “Because Richmond now is a beer destination, (the city’s beer history) all plays into it.” 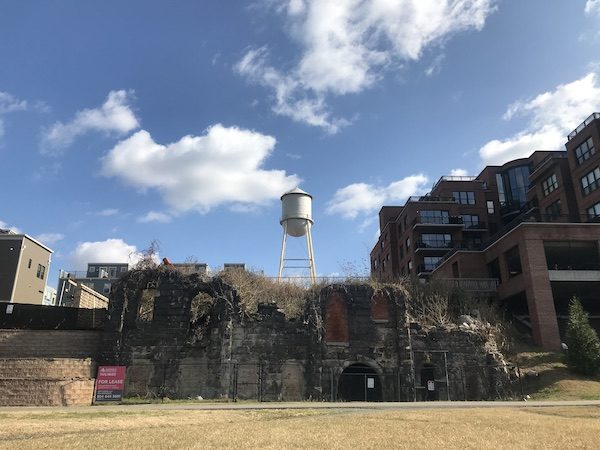 While the brewery was demolished in the late 1800’s, its cellars, visible from the Virginia Capital Trail, are still in tact. (Mike Platania)

The 7,000-square-foot cellars, which were added to the National Register of Historic Places in 2014, are available for lease and redevelopment.

Cushman & Wakefield | Thalhimer’s Jeff Cooke, who has the listing on the cellars with colleague Amy Broderick, said the space probably would be best suited for a restaurant or brewery, adding that no deals are currently in the works. A past proposal for a restaurant in the cellars never materialized.

“We get inquiries fairly often, but we’re not negotiating anything on it,” Cooke said. “It’s not the easiest property to work on … but there’s always been interest in it.”

The historical marker is within eyeshot of the former Intermediate Terminal Building at 3101 E. Main St. The century-old building once was eyed as a site for Stone Brewing’s World Bistro & Gardens, but that project has been on hold since 2017 as the city and Stone mull next steps. The terminal building was deemed ineligible for historic preservation in 2018.