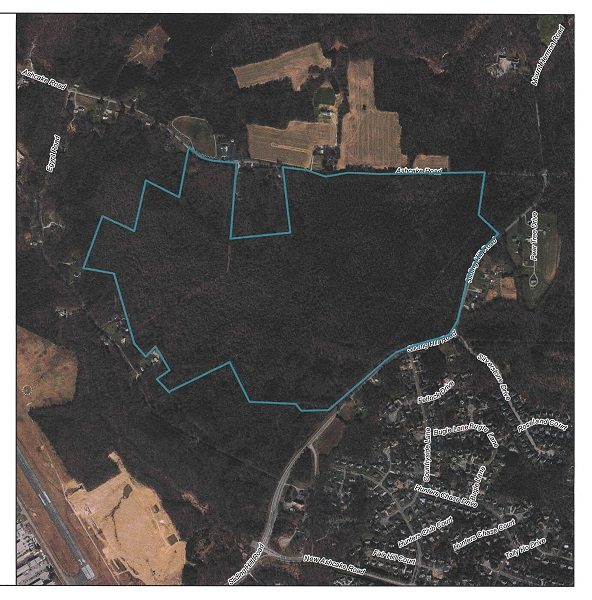 The 220-acre site east of the Hanover County airport planned for a Wegmans distribution facility and regional headquarters. (Hanover County)

Note: This story has been updated with comments from Hanover Economic Development Director Linwood Thomas and other details received after publication.

Three years after arriving on the local grocery scene, a New York-based supermarket chain on a steady expansion southward has picked Hanover County for a large-scale distribution facility and regional headquarters.

Wegmans Food Markets is set to build a 1.1 million-square-foot facility on about 220 acres just east of Hanover County Municipal Airport, the governor’s office announced Wednesday. The property is bordered to the north by Ashcake Road and to the east by Sliding Hill Road.

The $175 million project would create 700 full-time jobs, 140 or so of which would be executive-level positions. Hanover and Virginia won the project over North Carolina, which also was in the running.

An image of an existing Wegmans distribution facility. (Hanover County)

In a statement, Wegmans President and CEO Colleen Wegman said the Hanover site was selected for its proximity to the company’s stores and workforce. The facility is planned to deliver product to Wegmans’ southernmost stores and support further growth, the statement said.

The site consists of multiple parcels owned by Air Park Associates LP, an entity registered to Phillip Dean of Midlothian. A 217-acre tract that makes up the bulk of the property was purchased in 1986 for $202,000, according to county property records. The tract most recently was assessed by the county at $4.4 million.

The property was last zoned for manufacturing use in the mid-1990s. Air Park Associates is seeking to amend the zoning’s proffers to allow the distribution facility use. Its request is slated to go before the county Planning Commission in January or February.

Wegmans will be purchasing the land as part of its overall investment in the site. The facility will include executive offices and the distribution facility that will initially serve approximately 44 stores, said Linwood Thomas, Hanover’s economic development director.

“Many of those have not been built yet,” Thomas said, acknowledging that more stores would result from the facility’s construction. He said he didn’t know if any of those additional stores would be built in the Richmond region.

Based in Rochester, Wegmans has 101 stores in the Northeast and Mid-Atlantic, including two in the Richmond area: a 115,000-square-foot location at the Stonehenge Village shopping center on Midlothian Turnpike, and a 123,000-square-foot store in the West Broad Marketplace retail center in Short Pump. 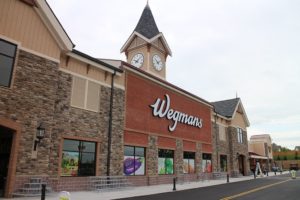 The company opened the Midlothian store in May 2016, followed by the Short Pump location three months later. The moves added a new player to the Richmond region’s crowded grocery market, joining other recent arrivals such as Florida-based Publix and Germany-based brands Aldi and Lidl. Last year, Aldi opened a $57 million, 562,500-square-foot distribution facility in Dinwiddie County.

Wegmans’ southward march also has included a store in Charlottesville. The company has a presence in a dozen locations across Virginia, in addition to stores in Maryland, Massachusetts, New Jersey, New York, North Carolina and Pennsylvania.

He said the county is allocating $1.5 million for infrastructure improvements to accommodate the project, specifically utilities and transportation upgrades. The latter will focus on Sliding Hill Road, parts of which already are in the process of being widened. The company also is eligible for state job tax credit for the 700 jobs to be created.

Thomas said the project, referred to as “Project Tiger,” has been in the works for two to three years, since Wegmans started shopping for sites along the Eastern seaboard. He said Hanover competed not only with sites in North Carolina but also other localities in the Richmond region.

The announcement adds to other economic development wins for Hanover over the past couple years, including last year’s “Project Neptune,” which resulted in Cascades, a Canadian packaging and tissue products producer, selecting the county’s Bear Island paper mill for a $300 million facility conversion. That project was highlighted at a GRP gathering and site selectors tour earlier this year.

“We’ve had probably 24 of the strongest months we’ve ever seen in Hanover, and a lot of that has to do with the cost to do business and strategic location of where we’re located,” Thomas said.

I do not know who decided that this location was appropriate for such an enormous complex but they obviously NEVER commute on these narrow winding country roads. I can not imagine the chaos that will be caused by the traffic on roads that were not intended for road tractor trailers. My heart goes out to anyone who lives in the blast area. One thing is certain, not one Hanover Supervisor or family member lives any where near this location.

Did you read the part about widening Sliding Hill Rd? This facility will be very close to I-95.

They are not widening past New Ashcake Road and are not adding a traffic light at the intersection of Sliding Hill and New Ashcake. It will add a lot more time for work and school commute.

This site has been zoned industrial for some time, which fits with most everything North of Sliding Hill Road. I think the site is appealing for distribution given the proximity to 95 and 295, not the ‘narrow winding country roads’ that don’t go anywhere useful for tractor trailers. Given that Sliding Hill Rd is already being widened, and DCs tend to be 24 hr operation, much of the traffic will be spread outside regular commuting times. Hanover needs businesses paying taxes. Hanover has designated development zones established in the Comprehensive Plan. This is such a zone in prime location near… Read more »