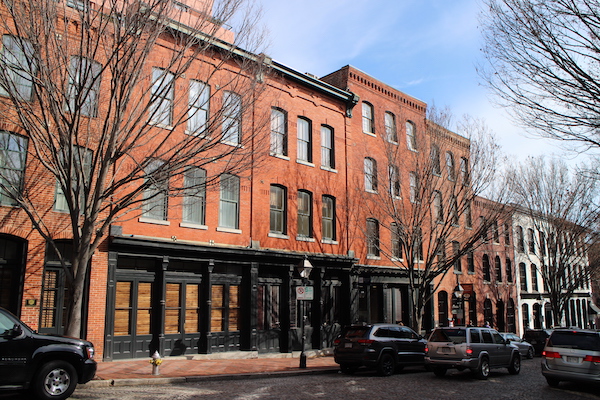 The building housing Sam Miller’s Restaurant, located on the cobbled sector of East Cary, has been put for sale for $3.7 million. (Mike Platania)

Just months after a neighboring hotel changed hands in a seven-figure deal, a group of adjacent Shockoe Slip buildings, whose tenants include a nearly 50-year-old restaurant, has hit the market.

Four adjoining buildings at 1208-1212 E. Cary St. were listed for sale this week at $3.7 million. The listing includes the 1210 E. Cary St. building that houses longtime seafood restaurant Sam Miller’s, which would remain open should the buildings sell.

The buildings, which total 26,000 square feet of space on 0.16 of an acre, are listed as a group and are not being offered for sale individually.

The buildings most recently were assessed by the city at a combined $4.15 million.

In addition to Sam Miller’s, tenants include financial firms RiverFront Investment Group and Dickinson Williams & Co., the latter of which moved in last fall. In total, the buildings are 48 percent vacant.

The buildings at 1208 and 1210 E. Cary are owned by Shockoe Properties LLC, an entity affiliated with Tom Leppert and Mark Gambill, Merhige said. Leppert owns Sam Miller’s, and Gambill is a founding partner of Cary Street Partners, a financial firm formerly located in the buildings.

Sidney and Ann Richmon own 1210½ and 1212 E. Cary St., per city property records. Attempts to reach the Richmons were unsuccessful Monday.