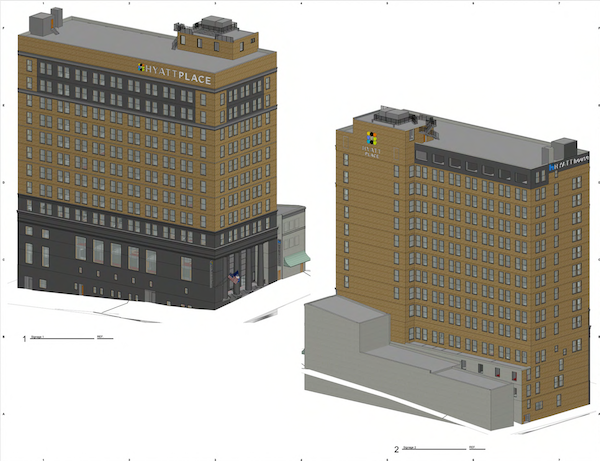 With crews already rehabbing one of its old office buildings up the street, a prominent D.C. developer continues to put more of its longtime Richmond holdings into motion – this time in the hospitality sector.

Douglas, which bought the building in 2001 for $4.2 million, filed a plan of development in late January. It’s unclear how much of the 126,000-square-foot building has been occupied since DEQ moved to the Bank of America Center at 1111 E. Main St. in 2017. 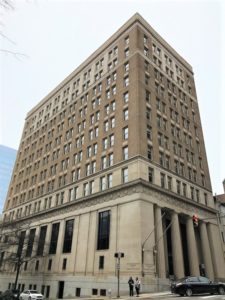 Douglas Development plans to convert the office building next to Capital Ale House into a hotel. (Mike Platania)

Douglas representatives were not available for comment last week.

Plans call for 210 hotel rooms, 130 of which would be for a Hyatt Place, Hyatt Hotels Corp.’s most common flag. The other 80 would be Hyatt House, its extended-stay brand. Hyatt has over 900 locations globally, and the downtown tower would be its seventh in the Richmond region.

Douglas also has filed for a demolition permit for the project that calls for minimal modifications to the 98-year-old building’s facade.

Local firm Balzer & Associates is listed as the project’s engineer. D.C.-based Fillat+ Architecture is the architect and Maryland-based RD Jones + Associates Inc. is the interior designer.

Since the turn of the century, Douglas has amassed over 20 properties downtown in Jackson Ward, the Arts District and the central business district. Its most prominent holding in Richmond is the Deco at CNB apartment tower at 219 E. Broad St., formerly known as the Central National Bank building.

While much of its Arts District properties have remained vacant and inactive, Douglas has begun to take action on some of its other assets. Last fall, the company began work on a $5 million conversion of the former Stumpf Hotel into apartments, located just a block east of the VDEQ building.

Douglas’ plan is the latest deal in Richmond involving a Hyatt-branded building. Local hotelier Shamin Hotels on Feb. 14 bought the Hyatt Place Richmond Innsbrook at 4100 Cox Road in Henrico for $12.1 million, according to Henrico property records. The county recently assessed the 124-room hotel at $9.9 million.

That deal adds to a busy start to the year for Shamin, which recently opened a Sheraton near Richmond International Airport and bought the Richmond Times-Dispatch building at 300 E. Franklin St. for $14.4 million, where it’ll move its headquarters.

The DEQ is one of the last “dinosaurs” remaining on the City skyscape and will soon be generating more revenue for the city in real estate taxes, sales taxes and hotel taxes. Hotels have an added benefit in that they bring feet to the downtown sidewalks on weekends and evenings, buying dinners at local restaurants and goods at local stores.

While they’re at it, maybe they can place some focus on getting their boarded up buildings on Broad and those on 2nd street up to at least code standards. Falling facades, open gaps in foundation/walls are not a good look, nor are they safe. And since they only want to lease to “National Brands” per their realtor Devaris, I think it’s safe to say they give two squats about the neighborhood.

City, can we require this extremely capable company to maintain their boarded up buildings to code standards, at the minimum?

Agreed. Their properties on Broad bring down the whole neighborhood. They can do better.

Ashley, Don’t forget open/missing upper floor windows. Funny as they got those buildings when Mayor Wilder threatened a Spot Blight case against the previous owners, the properties were then to Douglas, and if you read the Downtown Master plan it talks about the “success” (page 4.18) of the Spot Blight around 2nd and Broad. That was almost 15 years ago!

Some of those buildings, such as 112-114 E. Broad are even completely collapsed inside, with others at risk. At some point, it looks like they had started work on 124 but ceased and left the rear completely exposed. The interior of that block is completely rotten.

I thought the business community would stop being interested in Richmond because…Navy Hill.

Nobody said all development would completely cease.

I thought the schools were going to get a gabillion dollars after Navy Hill didn’t go through. Where did that money go?

We’re never going to get hotel rooms downtown to support the convention center, unless Navy Hill.

There still is no development in the Navy Hill area and not even a whiff that anybody is interested to develop there.

Just because a development happened somewhere in the city doesn’t mean there was a HUGE loss of opportunity when we turned down the Navy Hill deal.

The deal would have added more housing, office, and retail space than Scotts Addition got in a decade. Navy Hill or even the neighborhoods close to it look nothing like Scotts Addition and there is nothing to indicate they will anytime soon now the deal is dead.

This property was purchased and the rehab planned well before the NH plan was killed. Further, a Hyatt Place is not the same quality hotel as the five-star Hyatt that was planned for NH.

NH remains stagnant with no news on any “reset”.

2 hours later, and your comment suddenly has no merit. Lol