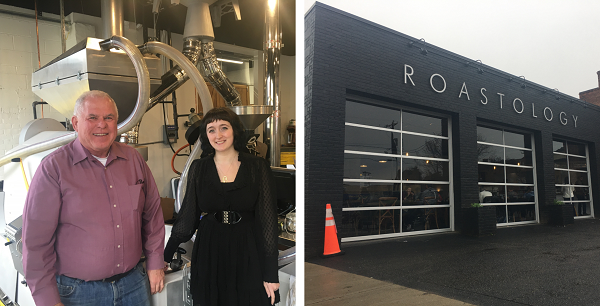 Correction: Roastology’s space was designed by BOB Architecture. An earlier version of this story incorrectly described the design as being handled in-house.

A homegrown café has traded suburban living in Chesterfield for an urban outpost near the Fan.

Roastology opened its new digs at 2701 W. Cary St. in mid-January after about six years on Midlothian Turnpike in North Chesterfield. The move puts the café in a better position to capitalize on foot traffic and brings it closer to customers interested in specialty coffee, said Dan Allen, who co-owns the business with his wife Elise.

“Being in the neighborhood, being accessible by more pedestrian traffic, was very important to us,” Allen said. “It’s been a tremendous improvement for us. I think the specialty coffee interest in this area is a lot higher than it was in our old location.”

Roastology’s roughly 5,000-square-foot space is split between a sit-down café area and its roasting operation. It’s a step up from the 3,800-square-foot shop the business occupied in Chesterfield, and allows it to operate a dedicated training and tasting, or “cupping,” space. 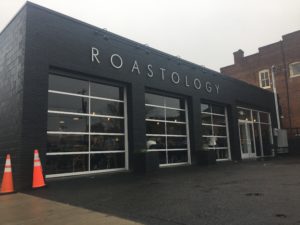 Roastology opened its doors at its new location in the Fan earlier this year.

The larger space allows for slightly more seats, and it also accommodates expanded kitchen facilities, which prompted a bigger menu. The café serves up sandwiches and salads alongside its coffee.

Roastology also has been able to triple its roasting capacity thanks to additional production equipment. Allen said wholesale is a focus of the company, which has deals with Ellwood Thompson’s, Kroger and Wegmans, as well as other establishments, such as Wild Ginger in Midlothian and fellow coffee purveyor Sugar & Twine up the street in Carytown.

Along with the move has come a change in Roastology’s interior design and setup, most notably the roasting area that is visible from the café through a glass panel window, creating an effect similar to the viewable production areas frequently found in craft breweries.

The shop’s look was influenced by what Roastology’s wholesale manager and roaster Mary Doerr saw at an industry expo in Seattle and other coffee shops. Richmond-based BOB Architecture designed the space.

Allen declined to share how much money was invested in the new space and equipment.

The building Roastology is leasing was bought by Lion’s Paw Development for $460,000 in 2018. The building used to be a construction warehouse, and in the 1970s it was an MG car dealership.

Roastology joins other coffee shops that recently have called Cary Street home, such as Fuel Pump and Capital One Café in Carytown. Also in the area are Lamplighter Coffee Roasters on Addison Street and Nate’s Bagels on Allen Street.

We were just there this morning and loved it! Very comfortable and the food/coffee was delicious!