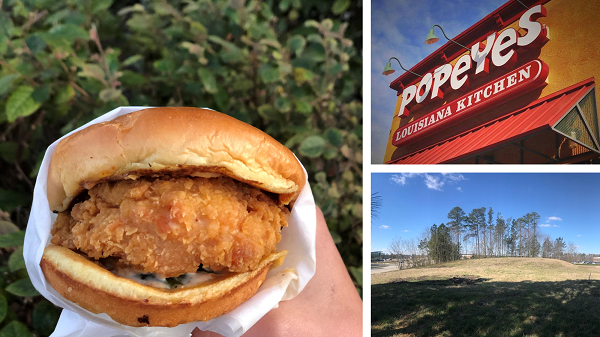 The location will be the chain’s 11th in the Richmond region. (Popeyes photos courtesy Popeyes and Wiki Commons; land photo by Mike Platania)

A national restaurant chain is expanding its local reach toward Chesterfield Towne Center, grabbing a spot for its next location along a fast-developing stretch of Koger Center Boulevard.

Popeyes Louisiana Kitchen is preparing to build a new restaurant at 1250 Koger Center Blvd. The one-story building would rise on about an acre of undeveloped land near the intersection of Koger Center and Mall Drive, close to Costco.

The land is owned by Woodlands Real Estate LLC, an entity tied to Bill Goodwin’s Riverstone Group. The site is next door to a 2.5-acre tract where Virginia Physicians for Women is planning a new 60,000-square-foot headquarters building. 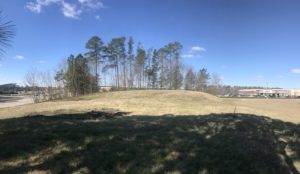 A plot of undeveloped land near Costco’s Midlo location will be filled by Popeyes. (Mike Platania)

Miami-based Popeyes filed plans for a 2,900-square-foot restaurant in January. Plans include a drive-thru and 32 parking spaces. A Popeyes spokesperson said it’s scheduled to open in the fourth quarter of this year.

South Carolina-based Diversified Development is listed as the developer, and local firm Balzer & Associates is the engineer.

The location would be Popeyes’ 11th in the Richmond region, per its website. Its closest locations in Chesterfield are at 7302 Midlothian Turnpike and 9961 Hull Street Road.

In business for nearly 50 years, the chain introduced a chicken sandwich last summer to wide acclaim, with several stores selling out of the items nationwide.

Competitor Chick-fil-A has a location just a couple blocks west on Koger Center Boulevard, and another within nearby Chesterfield Towne Center.

Another fast-food chain preparing to build from scratch in Chesterfield is Cook Out, which is adding a location just off Interstate 95 in Chester.

Popeyes chicken is ok, but let’s be honest, just because they have a single menu item meant to compete with Chick fil A doesn’t mean it holds a candle to them. They are absolutely not competition for Chick fil A. When I want terrible service and a meal so unhealthy licking a dumpster is comparable the first thing I think of is Popeye’s. Chick fil A at least has healthier choices and pleasant service and clean facilities.