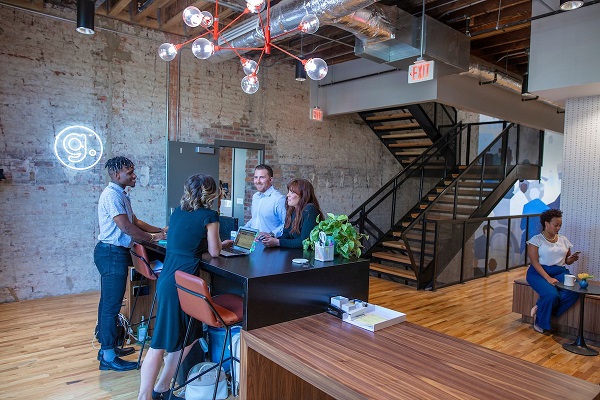 Gather has decided to remain open to members in the wake of Gov. Northam’s March 23 order. (Courtesy Gather)

The business model of the coworking space is largely antithetical to a time of pandemic.

Restaurants and breweries can sell their food and brews to go. Many white-collar firms can have their employees work from home. Retailers can use online shopping as a stopgap. Even live events such as concerts can broadcast online. But the main selling point of coworking spaces doesn’t fully translate in any other setting.

Now, in the age of coronavirus, the companies peddling such communal office spaces in Richmond are forced to react to a world where the concept of gathering is all but outlawed – and they’re taking varied approaches in their responses.

Some have elected to remain open while others have closed their doors temporarily. Companies that are open reported a noticeable drop off in members using their spaces and some asking to be let out of their lease commitments.

Gather, the Richmond area’s largest coworking brand with five locations, has decided to remain open following Gov. Ralph Northam’s March 23 order that directed the closure of some types of businesses deemed non-essential in an effort to help prevent coronavirus infections.

According to a letter to its members last week, Gather decided to remain open because while it isn’t an essential business itself, it counts businesses deemed essential among its membership. It reasons that to close down would impede those companies’ abilities to operate.

It argues it had medical, financial and construction businesses as members (all deemed essential by the state government), the March 24 letter states.

Managing Partner James Crenshaw said the company’s spaces essentially will operate as they would normally, though there’s been more cleaning and restrictions on members’ activities at its locations in the Richmond and Hampton Roads areas.

The letter mentioned restrictions, including requirements that members adhere to a 10-person limit on occupancy in a room and that members practice social distancing. All Gather-sponsored events are canceled for 30 days.

Gather’s locations are staffed up and operate on a normal schedule. The company hasn’t laid off any of its employees, Crenshaw said. The letter kept open the possibility that it could choose to close in the future.

Crenshaw said usage of Gather’s locations has been “light.” Some members – he didn’t offer a number – have requested their membership be terminated and Gather is working through that process with them. 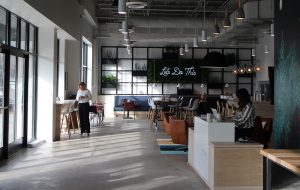 Gather has locations in the Arts District, Scott’s Addition, Short Pump, Newport News and Norfolk. Crenshaw said that while there’s continued interest in membership at new locations, it has fallen off recently as a result of the coronavirus.

“It’s not my place to determine who’s essential and who’s non-essential,” said Harry Vinson, the local operator, noting members have 24-hour access to the offices via key fob and staff sanitize the office at least twice a day.

The company’s website does not indicate any large-scale shutdown of its roughly 30 locations across the United States and overseas.

Vinson said usage of the space has been “minimal” in recent days. He said a few members have canceled their memberships, but he felt optimistic about the survival of Venture X and the coworking industry in general. 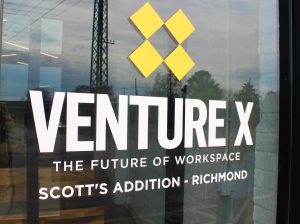 The Broad, a downtown coworking office at 209 N. Foushee St. that caters to women, decided to temporarily close March 16 as a result of the pandemic and plans to remain closed through April, owner Ali Greenberg said in an email.

“Our company exists to make space for women in Richmond, and the time came to take that mission literally by creating more space to help the effort to communally flatten the curve,” Greenberg said.

She said there haven’t been user requests to cancel their memberships. The Broad has more than 100 members. The coworking space has instituted discounted dues for April, which will help sustain operations, and offers digital programs to members. She said she’s hopeful the business will be able to weather the pandemic.

“We are hopeful, just like every other small business right now, that The Broad will come out on the other side of this pandemic intact. But, of course, the road is long and the end is not in sight,” she said.

I’m a member of one of the coworking spaces mentioned in this article, and they have been a godsend in my situation. I live in Richmond but work for a DC-area company in an “essential” industry that already allowed remote work before the coronavirus. It’s practically impossible for me to work out of my house during business hours as we only have 950 square feet and two small children running around, and of course any public place like Starbucks or the libraries has long been closed. Thank you Harry for keeping this space open and regularly cleaned/sanitized!