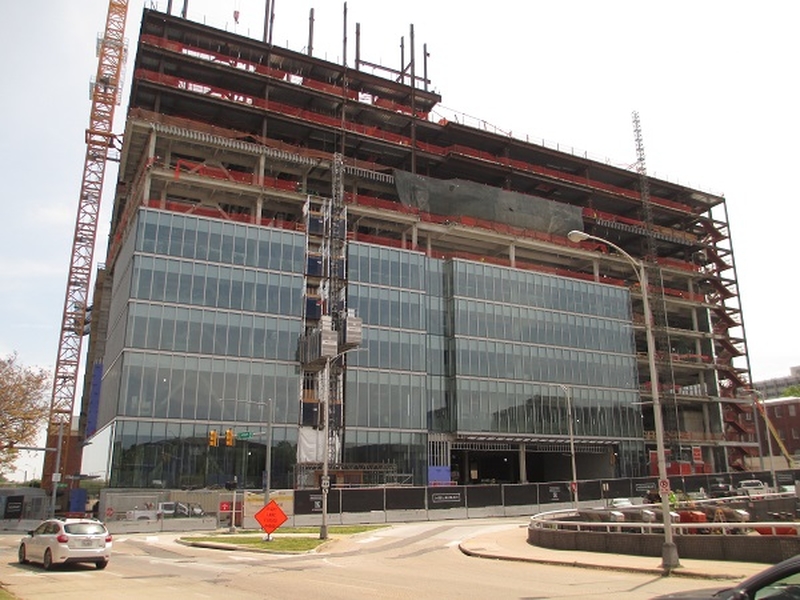 VCU Health Building under construction
Glass paneling has begun to be added to the building, as viewed from Leigh Street facing east. (Photos by Jonathan Spiers) 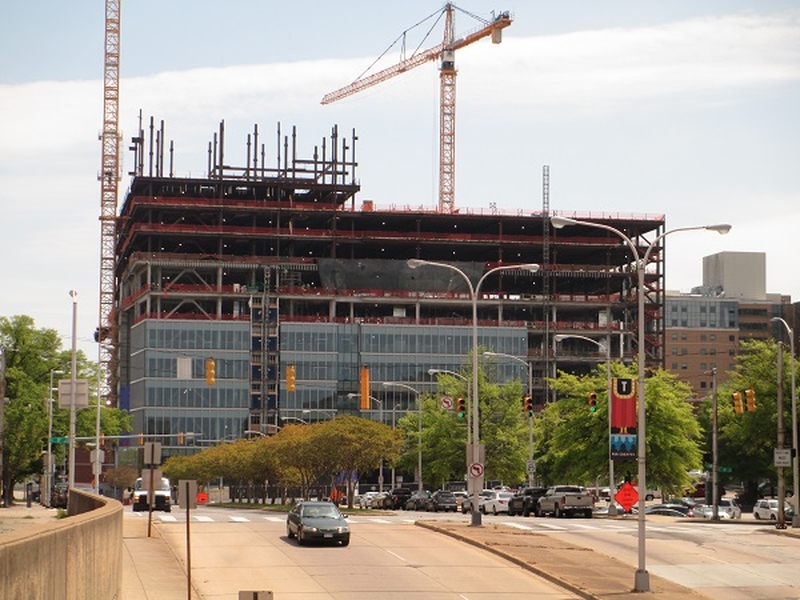 The building is planned to be 16 stories tall. 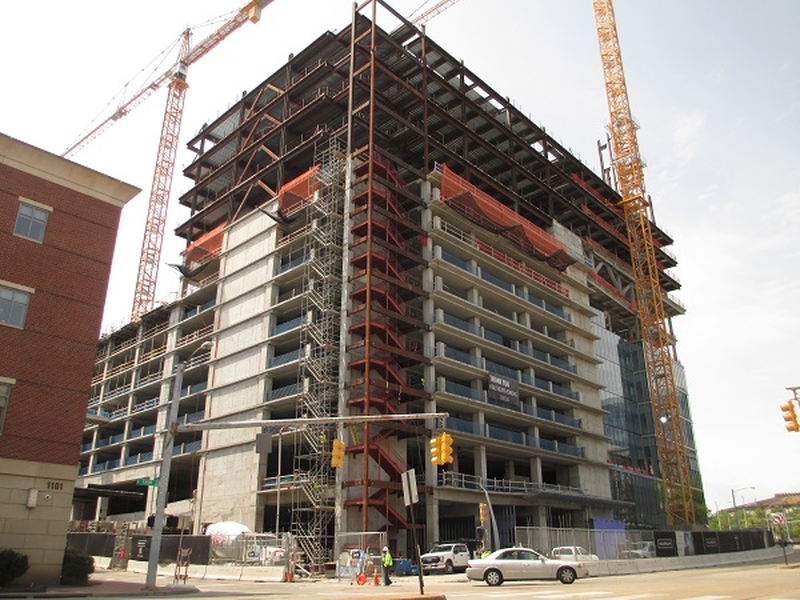 A westward view from Leigh Street. 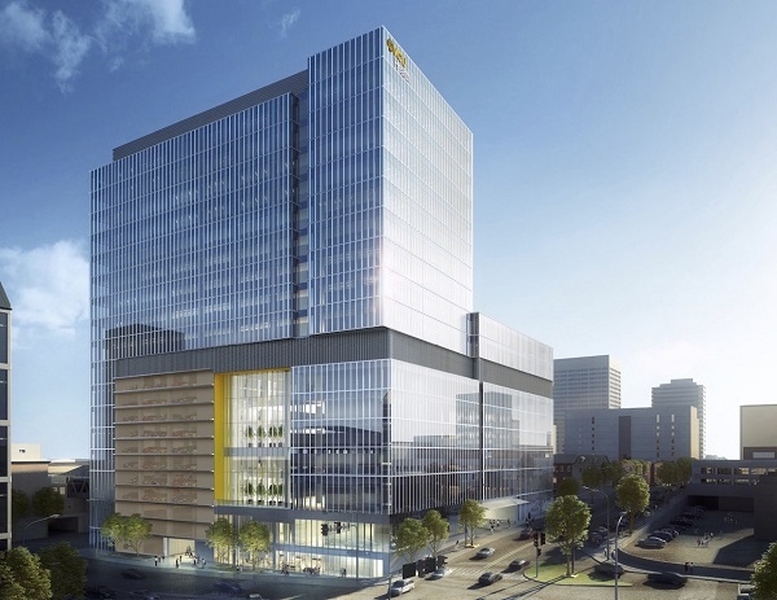 The building as it would appear from across Leigh Street, facing south. 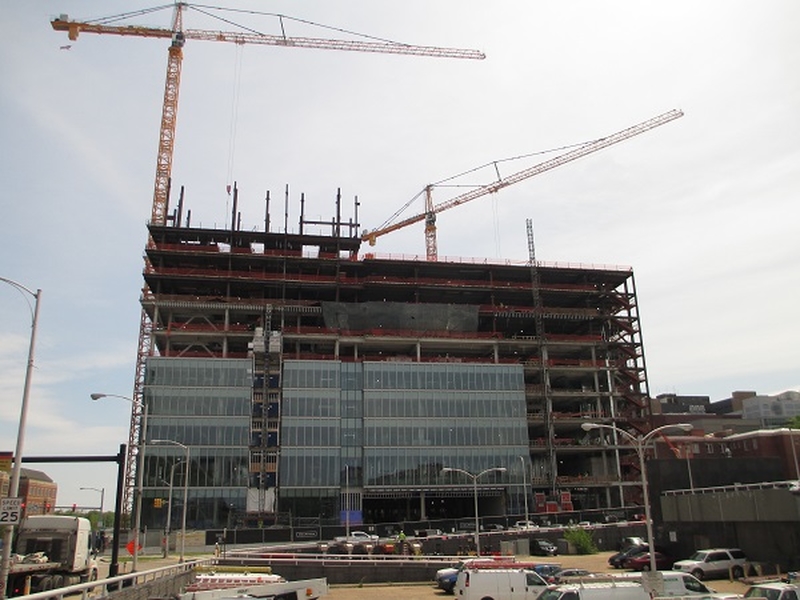 Cranes tower above the structure as it appeared in mid-April. 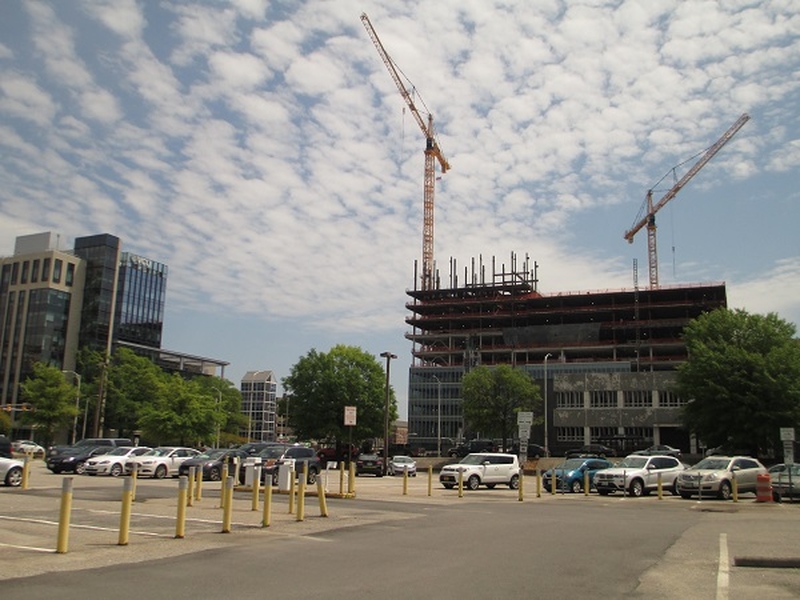 The structure is across Leigh Street from VCU's new Allied Health building, visible to the left.

Note: This story has been updated. See the correction at the bottom of the story.

One thing that working from home is depriving downtown employees of is the chance to bear witness to the vertical evolution of one of the newest, and tallest, additions to the city skyline.

VCU Health’s new 17-story adult outpatient facility has been taking shape in recent weeks along East Leigh Street, on the site of the since-demolished Virginia Treatment Center for Children between North 10th and 11th streets.

The $349 million project has been underway since breaking ground in mid-2018, but the building – the largest capital construction project in the health system’s history – more recently began to take on its future appearance, with glass paneling wrapping around its northwest corner. 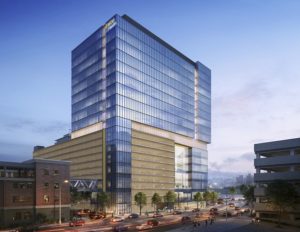 A rendering of the building as it would look from across Leigh Street, facing west. (Courtesy VCU Health)

The 603,000-square-foot building, initial plans for which were revealed in 2017, will be used to consolidate much of VCU Massey Cancer Center’s outpatient services, as well as various outpatient clinics currently spread among the downtown campus’s Ambulatory Care Center, Nelson Clinic and North Hospital. The structure is across Leigh Street from VCU’s recently constructed School of Allied Health Professions building.

Richmond-based Hourigan is constructing the outpatient building, which will include a 472,000-square-foot parking deck with 1,000-plus spaces. HDR Inc. is the architect on the project, which is scheduled for completion in summer 2021. Walter P. Moore and Associates is the structural engineer, and WSP is handling mechanical, electrical, plumbing and technology design engineering.

Initial plans at the time of the project’s groundbreaking called for a 16-story structure, with two additional levels underground. A penthouse level was later added, bringing the building’s total above-ground height to 17 stories.

Company namesake and CEO Mark Hourigan said the building is one of several projects that have continued to move forward despite the impact of the coronavirus pandemic. Other Hourigan projects underway include the second phase of the Church Hill North Retail Center and VCU’s new STEM building on the site of the Franklin Street Gym.

“So far, all of our owners want us to keep going, and every single job that we’ve got is rolling full steam ahead,” Hourigan said in late March. “That’s been kind of the mindset across the country, is to keep these jobs moving, keep these people employed, but keep it safe.” 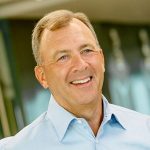 To that end, Hourigan said the company has been taking extra precautions in light of social distancing guidelines and public health concerns. He said job sites have additional handwashing stations and protocols for keeping workers at safe distances.

“We have taken extraordinary safety and sterilization and cleanliness procedures to keep the job sites safe,” Hourigan said. “They’re open, so it’s a lot more free air moving, and we’re working in areas where that’s honestly a very good thing.

“We are segregating the workforce in places to minimize interaction on the job sites, to try to keep people as separate as we can,” he said. “We are de-densifying the sites in terms of making sure there are not too many people working in any one area, maintaining the social distancing to the best of our ability in those areas.”

Hourigan said additional steps taken include requiring gloves to be worn at all times, and segregating job site entrances between his company’s workers and clients’ employees.

“It’s been a very collaborative effort,” he said. “This is a time people really pull together, and we’re seeing that.

“Nobody wants this, this is not good for anyone, so how do we get through it together,” Hourigan said. “From us to our owners, from us to our employees, what is it that we can do to help everyone get through this in the best way possible. That’s exactly what we’re trying to do.”

Correction: The completion date for the building is summer 2021. An earlier version of this story reported an incorrect date, and misidentified HDR Inc.’s role in the project. HDR is the architect, while Walter P. Moore is the engineer. The story also has been updated to explain an added penthouse level that brings the building’s total above-ground height to 17 stories.