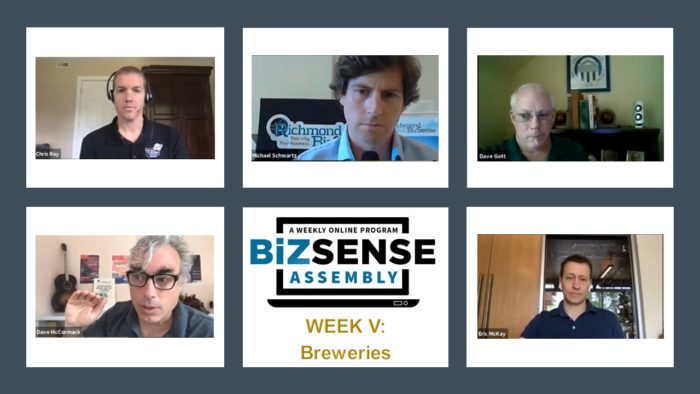 This week’s assembly focused on how the local brewery industry is handling the crisis. (BizSense graphic)

The coronavirus pandemic has upended the region’s beer industry, but local brewers have embraced new ways of doing business while looking forward to a return to some sense of normalcy.

That was the overall takeaway from the latest installment of BizSense Assembly, a weekly online panel discussion series held by Richmond BizSense, which on Wednesday featured representatives of Hardywood Park Craft Brewery, Center of the Universe Brewing Co., Legend Brewing and Trapezium Brewing.

“To put it bluntly, the last couple weeks of March and the first week of April were definitely the darkest time that we have experienced as a business,” said Eric McKay, co-owner of Hardywood. “It was a little terrifying, a little disheartening and I think we’ve started to see the light at the end of the tunnel, but it was definitely scary early on.”

For Hardywood, the first few weeks of the pandemic threw away carefully laid plans. Among those plans was the launch of a new lager at the end of March and the sale of its building near The Diamond, a deal that ended up closing in late March and providing Hardywood with some extra funds just in time. 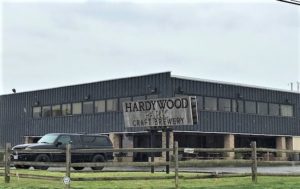 Those first few weeks were a time of new ideas and frustration as breweries grappled with government orders intended to limit the spread of the virus.

“For a while there, it was really a daily pivoting,” said Dave McCormack, owner of Trapezium in Petersburg and Beale’s Brewery in Bedford. “We’re entrepreneurs so we’re always trying to be optimists about things and find ways to attack the problem. I was really adamantly against the closure and all these things at the beginning … I didn’t want to close. I was pissed.”

Breweries had to move away from being a destination to bringing their beers to people at their homes or curbside. Things such as delivery and takeout operations sprang up to keep customers drinking beer and to bring in some revenue.

“Having the ability to do food and do takeout and do delivery has helped quite a bit. Certainly we’ve seen a large uptick in our to-go beer sales,” said David Gott, vice president of operations at Legend, adding that the support of loyal regulars has provided a bright spot in a difficult time.

The loss of the bulk of taproom revenue has been the biggest hit, as the margins from onsite sales are wider than off-site sales in grocery stores and restaurants.

McKay said Hardywood has seen 60 percent of its revenue disappear and operates at 50 percent brewing capacity. Grocery store sales have been flat compared to last year, and craft beer appears to be less appealing to grocery store shoppers as they seek to stock up on cheaper beer.

“I think the general tendency is customers buying in bulk, pantry stocking with 30-packs of generally less-expensive beer, which unfortunately hasn’t had as much as a boost as probably a lot of local breweries had hoped,” he said.

Center of the Universe Brewing Co. does 90 percent of its business through distribution, but likewise is struggling for grocery sales against lower-priced competition, said Chris Ray, co-founder of the Ashland brewery.

“We have a good presence in grocery and that’s really what’s driving our volume right now,” Ray said. “We’re not seeing the spikes like (some) people are reporting in grocery stores. That’s going to be more for value brands. And as more and more people get laid off and stop receiving those paychecks, we’re fearful that downward trend for higher-priced craft beer will start.”

About 70 percent of Legend’s volume is in distribution, driven in part by its well-known Brown Ale. Legend also has the added benefit of revenue from its onsite restaurant, which is still serving food to go.

“It’s been difficult trying to go back and forth between the two sides of our business. Rob the pub on a good day to buy grain in the brewery the next day, and then robbing the brewery when the check from the distributor comes in,” Gott said. “It’s a real juggling act to try to keep all this stuff straight and be sure you’re trying to keep your bills paid.”

Between PPP loans and whatever revenue can be mustered, breweries hope to make it to the other side of the pandemic. The focus is on how to safely reopen when the time comes.

McKay said people are becoming more accustomed to social distancing, so it’ll be easier to encourage those guidelines to be followed. And outdoor spaces at breweries likely would become more important and help people ease back into visiting. But McKay said it will take time for people to experience breweries the way they did prior to the pandemic.

“I think it’s going to be slow and it’s going to be a long time to really recover the types of events a lot of breweries used to have and were significant generators of economic growth for these companies. (It) may not happen for a year or more,” he said.

McCormack argued that human beings’ natural social behavior would entice them back into breweries. Current business models are a stopgap measure, and the taproom concept will endure post-pandemic.

“Right now we’re pivoting and doing a different business model just to get through,” he said. “I think the taproom model over the long term is going to be OK.”