Business on the regular meeting agenda includes the second of two public hearings on the proposed budget, and related fiscal plans and fee schedules, for fiscal year 2021. An initial hearing was held April 27. A vote on the budget would follow the hearing.

Administrators presented the revised budget plan to council last month, reducing revenue projections and expenditures by about 5 percent based on anticipated economic impacts from the coronavirus pandemic. Budget workshops to discuss potential further cuts have been held in the weeks since.

The new plan scraps essentially all new funding that had been included in an initial proposal in March, including a 2 percent employee salary increase and other pay adjustments for police and fire personnel.

Other business on Monday’s agenda includes a code amendment concerning the city’s tax amnesty program to provide for a 2020 tax amnesty period. Most other items on the agenda are to be continued to future meetings.

Henrico to vote on revised budget

Business includes a public hearing and vote on the revised budget plan for fiscal year 2021. The $1.3 billion proposal’s general operating fund is about $99 million less than the original plan presented in early March, before the pandemic began affecting the local economy, and nearly $45 million less than the current general fund.

The plan does not include a previously proposed 3 percent merit-based pay increase for employees, though it avoids any layoffs or furloughs amid a previously imposed hiring freeze.

Public hearing items include a request from HCA Healthcare to rezone 3 acres at Nuckols Road and Hickory Park Drive to allow an emergency medical facility. Nuckols Road LLC seeks to permit and rezone 16 acres on the east side of Nuckols Road at Fords Country Lane for a life care facility and retail and office uses. Both cases were deferred from the April 14 meeting.

Stanley Martin Homes and Wilton Acquisition LLC seeks approvals for a residential development with townhomes and houses on 32 acres north of Scott Road between Interstate 95 and Aberdeen Street. The land is just south of the site of Stanley Martin’s approved ReTreat at One development, totaling 500 homes east of Brook Road.

Up to 700 apartments are proposed to rise on a 13.3-acre parcel next to Wells Fargo’s Innsbrook campus at 4359 Sadler Road. (Saunders+Crouse Architects)

Also on the agenda is a provisional-use permit request related to Robinson Development Group’s planned mixed-use development on 14 acres at 4359 Sadler Road in Innsbrook, where it is planning 700 apartments across multiple buildings and nearly 30,000 square feet of commercial space.

The $175 million project proposed for 220 acres just east of the county airport drew considerable opposition from neighboring residents who expressed concerns in hearings and meetings about truck traffic and other impacts, but the project received approval by a 4-3 vote. 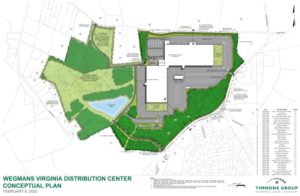 Wegmans is set to receive $2.35 million in state incentives that Gov. Ralph Northam approved through a Commonwealth’s Opportunity Fund grant, which Hanover matched. The county also is allocating $1.5 million for infrastructure improvements to accommodate the project, including utilities and transportation upgrades.

The board also adopted the fiscal year 2021 budget plan, which was revised in light of the economic downturn with a $266 million general fund that’s 3 percent less than previously proposed. The $478 million total budget does not include a previously proposed 2 percent merit pay increase for county and school employees, and funding for new positions was eliminated.

Supervisors meet Wednesday at 6 p.m. The board plans to advertise a public hearing for June 24 on a proposal to restrict through-truck traffic on Ashcake, Atlee Station, New Ashcake and Peaks roads. Full agenda here. 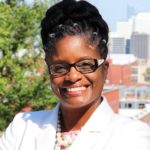 Richmond Redevelopment and Housing Authority commissioners named Stacey Daniels Fayson as interim CEO until a permanent replplacement is named for Damon Duncan, who resigned in March after a year on the job and is assisting with response to the coronavirus pandemic.

Daniels-Fayson will take over as CEO effective June 22. She currently serves as the agency’s controller and has worked for RRHA since 2008. She has 30 years’ worth of experience in finance and operation management in public housing and city government.