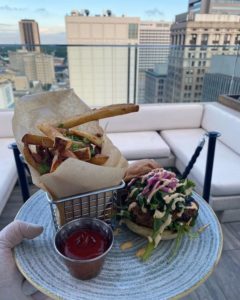 The challenges of running a restaurant in the age of coronavirus have presented an opportunity for a downtown taco shop and rooftop bar to team up.

Soul Taco, which also has spots in Jackson Ward and Shockoe Slip, has taken over the food operations at Kabana Rooftop above the Hampton Inn/Homewood Suites at 700 E. Main St.

Kabana is the tallest rooftop bar in the city (narrowly edging out The Graduate Hotel’s Byrdhouse for the title) and has operated with an emphasis on its bar and events.

With crowded bars and live music a rarity due to social distancing guidelines, LX Group’s Kunal Shah and Neal Patel approached the Soul Taco team in late May as they looked to improve Kabana’s food menu.

“The bar vibe of mingling and hanging out with different people and moving around the bar has kind of gone the way of the pre-COVID lifestyle,” Augenbaum said. “So food became a much more important part of (Kabana’s) operation than it was in the past … and the prospect of serving our food on a rooftop was extremely exciting to us.” 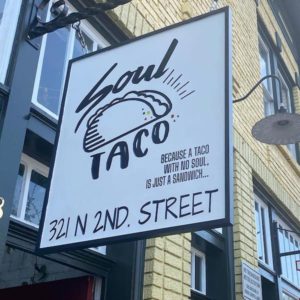 It’s the third location for Soul Taco, joining its Jackson Ward spot at 321 N. 2nd St. and 1215 E. Main St. in the Slip, which opened in 2018 and 2019, respectively. Owens and Augenbaum said they didn’t acquire or buy into the Kabana business. Instead Soul Taco takes revenue from food sales, and Kabana takes revenue from bar and event sales.

The deal came together quickly. “We were able to go from not even considering this to open in about two weeks,” Augenbaum said.

Soul Taco put together a new menu and hired a new staff to run Soul Taco at Kabana.

“Labor has been among the most difficult challenges that businesses are facing right now with unemployment paying as much as it is,” Augenbaum said.

But they said they got a new team into the kitchen almost overnight and began operations in early June. Owens and Augenbaum said they’re working on opening it up for lunch, and plan to offer Soul Taco as room service in the hotel rooms below.

Soul Taco at Kabana’s opening came days after protests began in Richmond following the death of George Floyd in Minneapolis.

Owens, who is Black, said he’s been encouraged by the community support of Black-owned businesses, including from Shah. Switch was among the businesses downtown that rioters vandalized during the protests. 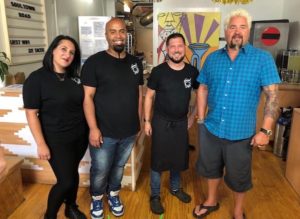 “Instead of Kunal being upset by things, not only is he saying Black lives matter, he’s putting his money where his mouth is and supporting Black-owned businesses and having us run the kitchen,” Owens said.

“Fortunately Soul Taco has been able get some more support from people who want to support Black-owned businesses. That’s really been helping things. … These things shouldn’t have to happen in order for people to say that Black lives matter.”

With the three locations running in Richmond, Owens said they’ve got more plans for Soul Taco.

“We were going to go to Raleigh and had a place worked out prior to COVID. Thank god we didn’t sign that lease,” Owens said. “We’re working on some other concepts. We’ve got some stuff up our sleeves.”

I’ll just jump in and say my wife and i went to Kabana becuase we needed to get out of the house a couple weeks ago.

Soul Taco’s food is much much better and more creative than the very standard bar fare that Kabana had before.

And even if you are not going for the party and night life vibe, the view is very interesting becuase you are overlooking the sight of the former Dominion building, which was imploded.