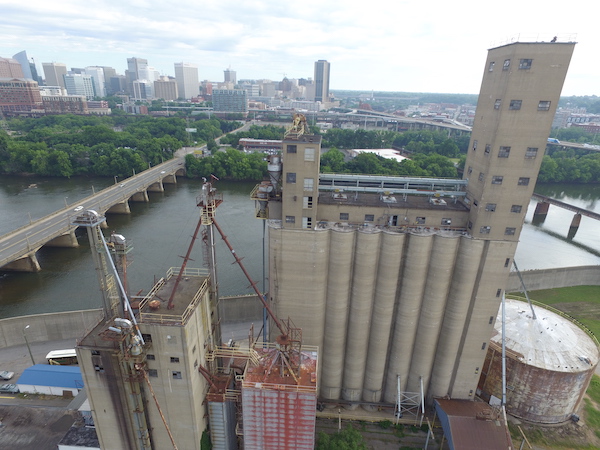 The old Southern States silos would be razed to make way for the project. (Michael Schwartz)

A towering but aging feature of Manchester’s riverfront is being eyed for redevelopment.

Hourigan Development is in the early stages of a plan to transform the site of the Southern States silos at 2-4 Manchester Road.

The silos, which have been vacant and unused for years, sit on about 2.2 acres of land overlooking the river.

Joe Marchetti III, president of Hourigan’s development arm, confirmed that the firm is looking to redevelop the site and is in the early stages of the project.

“We are looking at our options right now. The rezoning is an effort to put the site in the best position to have a unique project,” Marchetti said.

Hourigan filed a rezoning application with the city last week to change the land from RF-1 Riverfront District to B-4 Central Business District. Williams Mullen attorney Preston Lloyd is acting as Hourigan’s counsel.

The B-4 zoning would allow for multifamily housing, and Marchetti said the firm is eyeing a mixed-use project, including possible office or retail space, for the site.

“Right now we’re talking to a couple of tenants, trying to assess what the options are,” he said. 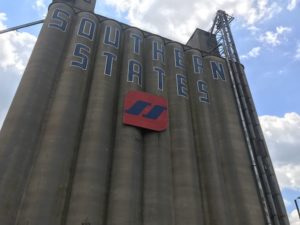 The project would involve razing the silos, which per city property records were built in 1957. Marchetti said it’s too soon to estimate the height or square footage of the project, but that it likely would be a midrise and of comparable size to other such projects in Manchester.

Marchetti said the firm has the property “under control” and declined to comment on whether it will be purchasing or leasing it. The land is owned by a group that includes H. Pettus LeCompte and most recently was assessed at a combined $3.3 million.

Last year the group sold some nearby acreage to Fountainhead Properties and WVS Cos., where the development duo is planning a seven-story extension of their South Falls project.

Marchetti said Hourigan is hoping to have the rezoning go before the Planning Commission and City Council within the next few months. 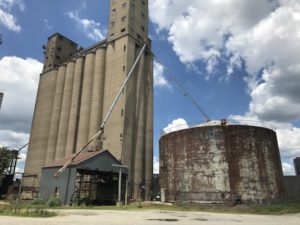 The towering silos are surrounded by a smatter of other small buildings. (Mike Platania)

“Obviously COVID has changed the process a bit. In an ideal world we’d have some tenants on board and have something to start at some point in 2021,” Marchetti said.

Just west down the Southside riverfront, another major project recently got approval to go forward. City Council last month approved a special-use permit for River’s Edge II, which will include twin 11-story apartment towers with a total of 350 units. The approval came shortly after its developers, Guy Blundon and Mark Purcell, purchased the project’s land for $8.7 million.

This could be the last available site to develop along the south side of the river for quite some time. Those rusted out old silos need to go anyway; they won’t blend in well with WVS’ “Hydro”. The Semmes avenue and Hull Street corridors are turning into canyons of apartments and new businesses.

Those Silos are a icon and beacon for every traveler heading south on I-95. It would be awesome to transition them into residential use, with a mixed use base. It would be a travesty to replace them with another bla building like Rivers Edge, the one going up across Hull or worse the Hydro prison across the river. One thing I do know is Hourigan, if they select the right Architect i.e. not those involved in most of the residential construction to date, has the ability to pull off a quality project this site deserves.

Fingers crossed. This could be something amazing.

It would be a very sad day for the City of Richmond to lose the Southern States silos. They should be protected as a historic landmark

I don’t think anything with the words “Southern States” will survive any effort to make it a historic landmark.

Are “canyons of apartments” a good thing when a developer has a unique asset like the Southern States silos? Not sure it would be profitable to keep the silos, but hopefully Manchester won’t be gifted with more cookie-cutter 4-5 story wood framed apartments.

Manchester is definitely a sea of too many same same buildings with questionable construction quality and questionable planning. I live there, and I enjoy the views and the convenience to get around town, but the “urban” landscape hasn’t been balanced with mini-parks, consistent sidewalks, retail or adequate parking for the projects (we are *not* in a metropolitan area where people don’t have cars and rely on transit only). Navigating from my apartment to walk downtown proves the blighted nature of the area where this luxury apartment was built. A recent new construction project on Hull is almost completed with a… Read more »

Ah, it’s the central business district designation that allows all this development to provide less parking than units and tenants…. I appreciate density, but this lack of parking will one day backfire.

It would be nice if they would do something with the silos like they did in Oklahoma City and turn it into a rock climbing/fitness venue. https://summitgyms.com/okc-silos

What a cool idea! I agree that some of this original structure should remain. Bridging old and new can be fascinating….My son did some work for Butterbean and the Brewery. They were just getting started when Covid hit. Hope they leave some green space but most developers want to use every inch of the property!