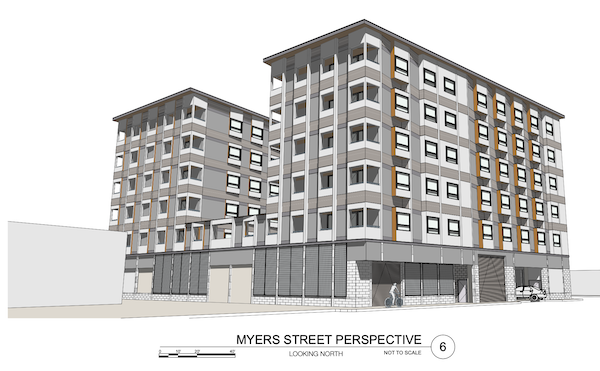 The project would be Outlier’s first in the Richmond region. (City documents)

A project that would add some height and residents to Arthur Ashe Boulevard has taken a step closer to becoming reality.

The project is from D.C.-based Outlier Realty Capital and would feature 29 apartments totaling 148 bedrooms.

It’s the second such cohousing or “coliving” project in the city, with individuals having their own bedrooms but sharing dining and living areas. A condo-based cohousing building recently opened in Manchester, making it the first in the city. 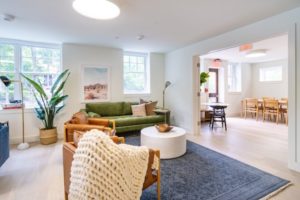 Common and shared areas at an Outlier coliving project in D.C. (Courtesy Common)

Due to the untraditional arrangement of the dwelling units, Outlier’s project needs a special-use permit. City Council is currently scheduled to hear the matter at its July 27 meeting.

More details about the project emerged during discussion at Monday’s planning meeting.

Outlier’s managing partner Peter Stuart said rents at the project likely would range from $800 to $950 per month and that there would be a minimum lease term of 90 days. He said that in D.C., where Outlier operates cohousing apartments, they charge about 30 to 40 percent less than what a studio or one-bedroom apartment would be in a given neighborhood.

Outlier is working with a property management firm called Common that manages over 2,000 coliving beds in 22 cities nationally.

Stuart said that while they do get many recent college graduates as tenants, the average age at a Common coliving project is about 30.

Stuart added that the units would be fully furnished, and cleaning service and all utilities would be included in the rent.

Councilwoman Ellen Robertson, who also serves on the Planning Commission, was the lone member of the commission to not support the matter. Robertson raised concerns about the similarities between such a project and a boarding house, and about the precedent approving the special-use permit would set regarding allowing more than three unrelated people to live in an apartment.

Stuart said the vast majority of Outlier’s residents stay for more than a year, and that over half of them are people who are new to the given city the cohousing project is in.

At its Monday meeting the Planning Commission also deferred a decision on rezoning the latest swath of land in the city’s Pulse Corridor Plan.

The land in question is largely north of West Broad Street across from the Fan and includes the area surrounding the Science Museum of Virginia. The city is seeking to rezone that area, and other parts along the Pulse bus line, to allow for more density and mixed-use development.

The Commission is set to consider the rezoning at its Sept. 8 meeting.

$800-$950 per month for a 4-bedroom unit? Come on! They must be renting per room. Rent includes cleaning services. This is boarding house.

You should take the time to read both this article and the previous article on this project. That $800-950 per month price is per room because it it set up as a co-living space. You don’t rent the entire four bedrooms. This is similar to a boarding house but due to the minimum 90 day lease along with common spaces being share by only four bedrooms makes this project more stable and appealing than a traditional “boarding house.” The four rooms will share a central living space such as kitchen, living room, and dining space. This shared common room will… Read more »

I agree it’s an interesting option for short term living, especially for those who have no cars. I wonder if, like student housing, each bedroom has it’s own private bath or if one bath is shared by 4-5 bedroom occupants of an apartment? Do you know?

if it’s being built ala the student housing model, a 5 bedroom unit will garner $4500 per month, less utility costs. The developer should make some change on that. Nice concept!

I found online the floorplan for the Manchester building. It appears each bedroom has a bathroom.