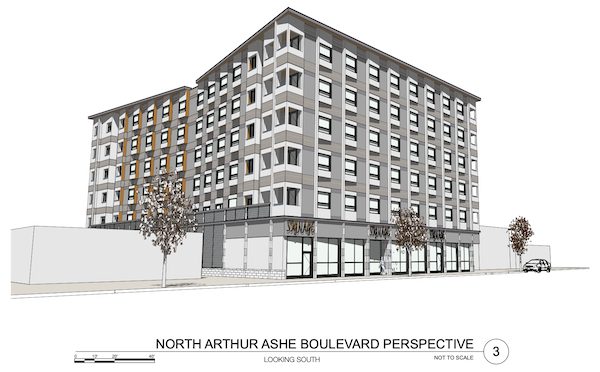 A rendering of the planned 6-story structure. (Courtesy city documents)

The cohousing trend is popping up again in Richmond, this time on North Arthur Ashe Boulevard.

D.C.-based Outlier Realty Capital is planning a six-story cohousing project at 1101 N. Arthur Ashe Blvd. The site is adjacent to the Starbucks and Growlers To Go building, and formerly was home to McCauley’s Paint & Body shop. 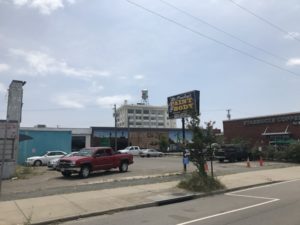 The cohousing building would rise on a plot of land just north of the Starbucks and Growlers To Go building on North Arthur Ashe Boulevard. (Mike Platania)

Plans call for a 64,400-square-foot structure with 29 apartments totaling 148 bedrooms with shared kitchen and living areas. It would include 1,500 square feet of commercial space on the ground floor along with 30 parking spaces.

Outlier is seeking a special-use permit for the project. The city’s Planning Commission is set to hear the matter at its July 20 meeting.

Cohousing buildings typically are laid out so residents have their own personal bedroom and bathroom, but share dining and living areas with a handful of other tenants, similar to a college dorm suite. Many cohousing units have an ownership model akin to a condo complex, and the residents pay an association fee for upkeep of the rest of the building.

The trend has gained steam in bigger markets nationally and arrived in Richmond about two years ago with a condo-based approach by local developer Robin Miller in Manchester. That complex began moving in residents last month.

Outlier is listed on the application as its “contract purchaser” for the 0.3-acre site on Arthur Ashe Boulevard. Warwick Park LLC owns the property. It most recently was assessed by the city at $817,000.

The land’s zoning, TOD-1, allows for mixed-use projects up to 12 stories, but Outlier is seeking a special-use permit because the cohousing units “do not meet the traditional definition of dwelling units in the City of Richmond’s Zoning Ordinance,” per its application.

The project would be Outlier’s first in the Richmond region. The firm has 21 multifamily properties in its portfolio, most of which are cohousing projects in the D.C. and Maryland area. 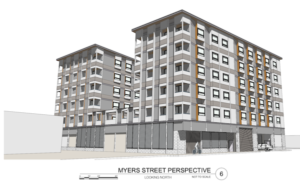 The project would be Outlier’s first in the Richmond region.

Outlier founder Peter Stuart was not available for comment by press time. It’s unclear what the rent rates would be at Outlier’s project. The special-use permit application states that the units’ rent periods would be at least 30 days.

Walter Parks Architects is listed as the architect, and Lory Markham of Markham Planning is representing Outlier in the application process.

The project would be adjacent to The Scout, a new mixed-use project by Spy Rock Real Estate at 947 Myers St. Richmond 300, the city’s recently released draft master plan for the city, envisions Arthur Ashe Boulevard as more accommodating of pedestrians and other modes of transit.

Another residential project is in the works around the corner from the Outlier site. In the spring, Bank Street Advisors filed plans for Soda Flats, a 73-unit apartment project adjacent to the Hofheimer Building.

Sad. The character of Richmond is slowly being erased with these ugly high rise apartment buildings being propped up all over town. Only a matter of time before Richmond looks like just another overcrowded, cookie cutter, mixed-use nightmare like NOVA.

Am I reading this correctly? 29 units with 148 bedrooms?!! an average of 5 bedrooms per unit? and only 30 parking spaces? this seems a bit more oriented to student housing.

Wow, 148 bedrooms and 30 parking spaces sounds like a bad idea to me.
I suppose since it’s on the pules line and is like a dorm you could get a lot of recent VCU grads and some students, but that is not really going to help enough.

I cam see in 20 years all teh “co-housing” spaces turning into flop houses.

Where are people supposed to park for all the “retail space” in the first floor?

Also, and this is a nitpick, but I hope “Ashe Boulevard” does not catch on.

Every time a new development comes up with less parking spaces than beds we see the collective wringing of hands and the clutching of pearls.
Higher density housing closer to public transportation corridors is a good thing. They need each other to succeed, so now there are transit corridors, we can have higher density housing with fewer parking spaces.
Having the choice of car ownership is far better than having to own a car. I can certainly see why RVA has the worst sprawl in the state and pays little more than lip service to mass transit.

Yes, it is deeply engrained in the culture of the city. Despite commitments to increasing mass transit and curbing ecologically destructive sprawl for the past 40 years, the city and region have done little to bring this about. The Richmond 300 plan appears to be a step in the right direction (unless is gets gutted by reactionaries) but parking requirements are not address adequately. Parking requirements rule richmond. It’s doesn’t matter if the developable FAR of a parcel is tripled if you can’t fit the cars on the lot. That’s why there is so much allowable density that remains unbuilt… Read more »

Is this type of living really conducive to a Covid-19 type of pandemic? Coop dining. Very high density. Really?

Bad timing for this type of living.

I am sure you are not the only one thinking this reasonable thought, but presumably there will be a vaccine before the project is completed in a year or two.

It isn’t the density of the living that is the problem. It is the behavior of the people that is the problem. Japan has not suffered anything like the US, UK, Brazil etc yet is one of the most densely populated countries. 5 people sharing communal facilities is just people in rented rooms in a house.

Thanks for adding that point. You are absolutely right. Even mass transit has proven to be surprisingly safe if the right behavior and safe guards are in place. Dense urban areas are vastly ahead of their suburban counterparts, as the 1.5 million annual auto accident deaths globally shows. This is to say nothing of air pollution, obesity, and other linked problems.

Excellent! It’s great to see more housing going up in Scott’s Addition. Will continue to fill in the city nicely and bring vibrancy to the area.

Why does Richmond Biz Sense rarely provide rent estimates for new apartment developments? No doubt it’s a jaw-dropping number. Biz Sense reporters seem to obediently provide only the info the developers want them to share. Stories like this stink of pandering.

If the developer’s won’t provide what they are planning to rent for how are they supposed to put it in a story?

Is the developer writing the story or the reporter?

Yeah this is student housing no question. I mean 100+ in a single dining room, that’s a dining hall. I bet each unit will have a full kitchen.