A rendering of the planned 7-story development. (Courtesy city documents)

Another new development with some height is planned along the Pulse Corridor on Broad Street, this time by one of the developers behind the Quirk Hotel.

The project would rise on a 0.4-acre plot of land adjacent to the Hofheimer Building that’s currently occupied by auto shop Broad Street Performance Center, with a pair of billboards on top of it.

Bank Street Advisors, a real estate firm whose work includes both Quirk Hotels and the in-progress One Canal in Monroe Ward, is listed as the project’s developer. Bank Street principals Ed Brown and Christian Kiniry were not available for comment by press time.

Soda Flats plans call for 67 one-bedroom units and six two-bedroom ones on top of a ground-floor retail space.

Other amenities include a common area, indoor bike storage area, a 4,000-square-foot elevated courtyard and a pool.

SMBW is the project’s architect, VHB is its civil engineer, and CMTA Consulting Engineers is its industrial engineer. 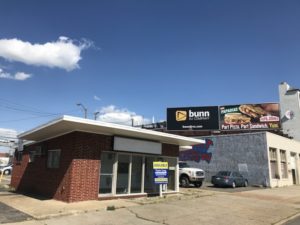 The property, most recently assessed by the city at $1.17 million, is owned by an entity tied to the Margulies family, who could not be reached for comment. The land is zoned TOD-1, a zoning designation created a few years ago to encourage infill development of up to 12 stories along the Broad Street and Pulse corridor.

A few miles east along Broad, the TOD-1 zoning is being used by Minnesota-based The Opus Group, which plans a 12-story, 168-unit apartment building near the intersection with Lombardy Street.

A few blocks down on the same side of West Broad, work continues on The Summit, a 168-unit mixed-use building from SNP Properties.

seems like a good building, glad something is happening with that location

But maybe they can keep the billboards; I mean I just can imagine Broad Street without tacky billboards up against or on top of buildings 🙂

anyone know what’s happening with this?