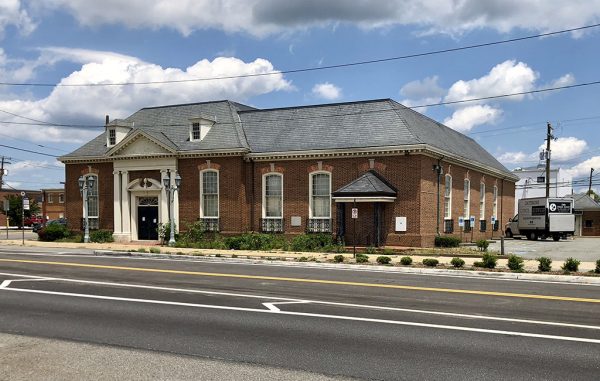 After a previous plan for a brewery failed to materialize, a local restaurateur and hotel executive is in talks to sell off a West Broad Street parcel to a pair of developers planning to construct a 166-unit apartment building.

Jay Shah has placed the site of the previously planned Statement Brewing at 3022 W. Broad St. under contract with Eric Phipps and Bryan Smith of SNP Properties, who are planning to raze the former SunTrust Bank building there to make way for a six-story building with apartments above street-level retail.

That height would be comparable to the nearby Quality Inn & Suites building at 3200 W. Broad St. that Better Housing Coalition has floated for redevelopment, as well as the nearby 3600 Centre building and Historic Housing’s Scott’s View towers under construction on Roseneath Road.

SNP expects to close on the 0.6-acre site by September for an undisclosed amount, Phipps said Wednesday.

Shah and business partner Joel Gilbert decided to pass on the brewery concept earlier this year after they could not secure historic tax credits to renovate the former bank branch.

The property, which is located at the intersection of West Broad Street and Summit Avenue along the bus rapid transit route, was most recently assessed by the city for $1.7 million, according to property records.

SNP’s project, called The Summit at Scott’s Addition, is planned to consist of 8,500 square feet of ground-floor retail and five stories of apartments above. The retail, fronting West Broad Street and Summit Avenue, will wrap around a central surface parking area, with an underground parking level providing additional spaces.

Overall, The Summit will include 168 residential parking spaces and 30 spaces for its commercial tenants.

Of the 166 apartments planned for The Summit, Phipps said 80 percent will be one-bedroom units, while the remainder will be two-bedroom units. He said SNP is mulling rental rates for the units. 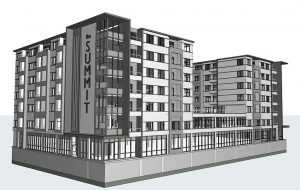 In addition to the on-site parking, amenities will include a pool, courtyard area and 2,000-square-foot clubhouse that will include a video arcade and fitness center.

SNP is working to secure a general contractor for the project, Phipps said. Walter Parks Architects is designing the project, while Sperity Real Estate Ventures has been retained to lease up the commercial space.

Phipps would not disclose an cost estimate for the project.

He said construction on the building is slated to start in October, with the units to be delivered by spring 2020.

The project adds to a flourishing portfolio that SNP Properties has been amassing in Richmond.

The group first entered the downtown market last September, snapping up three buildings on the same West Broad Street block for a total of $15 million.

A month later they closed on four contiguous parcels in the 0 block of West Marshall Street for about $2.8 million, setting the stage for The Marshall at City Center – a five-story, 166-unit apartment building under construction in Jackson Ward.

SNP is rehabbing the 102-unit West Broad Street Apartments and it is leasing space to LX Group for a restaurant and entertainment venue at 13-15 W. Broad St.

Phipps called Scott’s Addition an ideal next step for the group given the area’s walkability and access to entertainment options.

“We’ve had our eye on Scott’s Addition for a while,” Phipps said. “It’s an attractive area for people that want to live, work and play in the area, so establishing a project like this in Scott’s Addition is ideal for us given the growth that’s happening there.”

Others have their sights on the neighborhood as well.

An entity tied to Washington, D.C.-based Dalian Development purchased the Party Perfect building at 3210 W. Marshall St. for $3.8 million. No plans for the site have been filed with the city.

Meanwhile, another development team with a hankering for height is mulling plans for a possible mixed-use project. Charlottesville-based Stony Point Design/Build purchased the former Movement Church at 3013 Cutshaw Ave. earlier this year for $1.9 million.

Looks promising. The rendering isn’t particularly sexy, but Walter Parks does good work, so I’m looking forward to seeing the finished product. This is early proof that the Pulse and the denser zoning may be working.

Glad to see some movement on this property. Sad that this structure is going to be demolished was looking forward to seeing this as a restaurant/brewery. It was a nice looking building. Know we wait to see what the Better Housing Coalition is going to do with the Old Quality Inn next door. The rendering before the development stalled was nice.