A rendering of One Canal. (SMBW)

The recent rise of apartment buildings along the southern border of Monroe Ward is set to continue, as a local real estate firm already active in the area has cleared the way for a new project along a busy stretch of Canal Street.

Bank Street Advisors plans to develop a seven-story building with 138 one- and two-bedroom units at the northeast corner of East Canal and South First streets. The podium-style structure would include structured parking and commercial spaces on the first two floors, with the bulk of the apartments filling the top floors.

Bank Street closed Friday on two deals totaling $2.24 million for the land, which consists of 13 contiguous lots totaling 0.65 an acre. Much of the sloped land is currently used as surface parking lots. 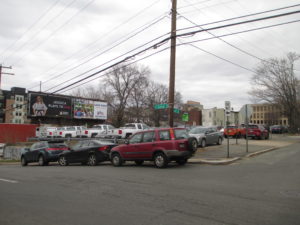 The site at 1st and Canal streets. (Jonathan Spiers)

The property had been under contract since late 2018, though the identity of the buyer wasn’t known until now. The land was rezoned last year to the city’s TOD-1 transit-oriented nodal district to accommodate the project.

Bank Street principal Ed Brown said the firm had been eyeing the area for another project, having recently redeveloped a pair of office buildings up the street at 1 W. Cary St. into 17 apartments. He said the area’s proximity to VCU and Interstate 195 have helped keep those units full.

“It’s an area that we’ve been in. We’ve got other assets in Monroe Ward,” Brown said. “We like its views and the ease of access off of (Interstate) 195.”

Bank Street worked with local attorney Jennifer Mullen of Roth Jackson, who Brown said was instrumental in assembling the properties and securing the zoning.

Called “One Canal,” the seven-story building would consist of nine apartments and commercial space on the first two levels, which would combine with structured parking to fill the building’s concrete podium base, and the remaining 129 apartments above.

Local architecture firm SMBW designed the building, and Commonwealth Construction Management is signed on as the general contractor. Brown said the project would break ground this spring and last 18 months.

Rents for the apartments have not been set. The one- and two-bedroom floor plans will average 685 square feet in size, Brown said. 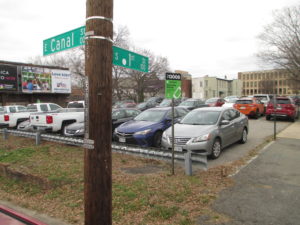 Bank Street purchased the land Jan. 24 through an entity called One Canal LLC. The bulk of the properties had been owned by an entity called South First Street LLC, which sold 12 of the 13 parcels for over $2.05 million. The remaining parcel was purchased from Colonial Plating Shop LLC for $185,000.

Pearsall, who resides in Monroe Ward, also managed an entity that sold another nearby surface parking area – along Foushee Street between Main and Cary streets – to Eagle Construction of VA, which is building 21 townhomes there.

New apartment buildings have been on the rise along Canal for several years, spurred in part by 8 1/2 Canal Street, a student housing complex that added 160 units, and the addition of Triple Crossing Brewing’s original brewery nearby.

Monument Cos.’ 47-unit Matrix Midtown apartments is at First and Canal across from the One Canal site. Monument also transformed, with Sensei Development, the former NDP building at 1 E. Cary St. into Phoenix at Foushee, consisting of 20 apartments and 1,300 square feet of ground-floor commercial space.

Agreed. Wish it was higher but it is an improvement over the parking lot.