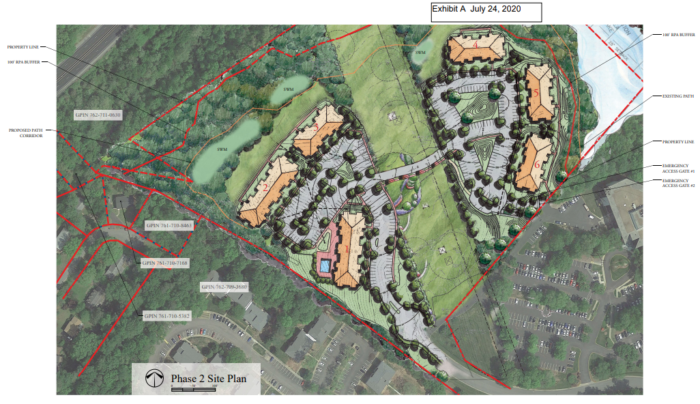 The evolution of Boulders Office Park as a place to live as well as work continues with another round of new apartment buildings in the works.

The six-building complex would rise on the opposite side of a smaller lake from the under-construction Boulders Lakeside, where the first two of eight planned buildings totaling 248 units were delivered in recent months, along with that phase’s clubhouse. 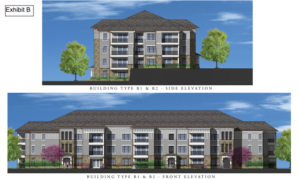 The first phase is filling a 25-acre parcel at 900 Boulders Parkway, where DRP secured a similar zoning change in 2018. Both properties are located within a state Opportunity Zone.

Access to the new complex would be provided via a driveway for the Xenith Bank headquarters building next door to the tract. The site, which is bisected by a powerline easement, is owned by Principal Development Investors LLC, an Iowa-based entity that has controlled the parcel since at least 1999, according to county property records.

Campbell said initial response to Boulders Lakeside prompted the firm to move forward with the second phase, which is estimated to cost $42 million. The first phase, which DRP is developing with Florida-based Amzak Capital Management, is projected to cost $47.6 million.

“Leasing’s going really well,” Campbell said of Boulders Lakeside. “We’ve had a lot of interest, and we’re just getting started.”

DRP is applying to rezone the property from office to multifamily residential use. The Richmond-based firm, which also has offices in Raleigh and Charlotte, is working with Hirschler attorneys Jeff Geiger, Susan Smith and Jim Theobald, who submitted the application in mid-June.

The project would continue what DRP started with Boulders Lakeside’s first phase, which broke ground in May 2019 and is slated to wrap up in November. DRP purchased that property, now listed with the county as 1006 Boulder Lake Terrace, in April 2019 for $3.5 million, property records show.

DRP also owns three of the park’s office buildings, Boulders I, II and III, home to tenants including Timmons Group and Tredegar Corp. The three buildings, totaling 288,000 square feet, were purchased in September 2016 for a combined $25.73 million. 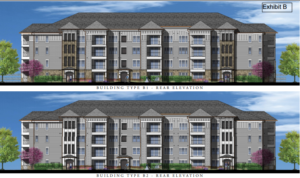 Where the first phase consists of eight three-story buildings, the new complex would total six three- and four-story buildings, with up to 12 units per floor. The 214 units would consist of one- and two-bedroom floorplans.

Campbell said the apartments would be comparable in size and monthly rents to the first-phase units, which range from about 750 to 1,150 square feet and rent from $1,230 to $1,570 per month, according to Boulders Lakeside’s website.

The second phase would include parking at a rate of 1.5 spaces per unit. Amenities include a 2,500-square-foot clubhouse with pool, benches, pergola, gazebo and gathering areas. The property also would include pocket parks, a dog park, open space and trails along the lake. 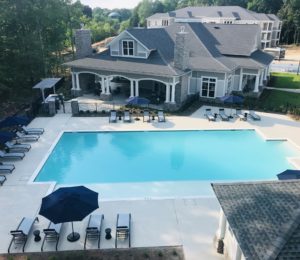 Virginia Beach-based Armada Hoffler, which is building the first phase, would remain as general contractor for the second phase.

Campbell said construction on the second phase is anticipated to start in the first quarter of next year, with the phase fully delivered in 2022. The Chesterfield County Planning Commission is set to consider the zoning request at its Aug. 18 meeting.

DRP’s project adds to a growing trend of adding residential uses in suburban office parks. Across the river in Innsbrook, Robinson Development Group is planning 700 apartments and nearly 30,000 square feet of commercial space on 14 acres at 4359 Sadler Road, near where WAM Associates LLC is adding nearly 350 apartments with its Innslake Place development.

Elsewhere in Innsbrook, Dominion Energy recently put up for sale about 12 acres at 5000 Dominion Blvd. and has been in talks with an unnamed buyer who is eyeing the site for a multifamily housing development.

Congratulations to Michael Campbell for recognizing the future of Boulders Office Park before others did. I showed that acreage to many apartment builders who discounted it as multi-family. He pounced on it once the County realized that its cash proffer system was counter productive in generating longterm revenue. Henrico gets it too. Hanover County needs to accept the same premise, that long barren office zoned acreage can be productive cash generating class A apartments.

And in doing so ruined a nice peaceful trail around that lake. Terrible.

Trail is in process of being put back in better shape than it originally was. first section of trail will be paved and the Developer is adding a dock with a roof at the lake!

Is any adjustment being made to the plans for the, soon to be rebuilt, Crestwood Elementary School to adjust for capacity?