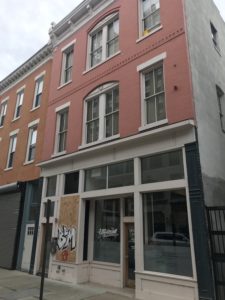 The developer struck a deal last month to purchase the Stationhouse Apartments building at 207 N. 3rd St. for $1.14 million.

What makes the deal peculiar is that it’s the third former firehouse in Vanderbilt’s portfolio of about a dozen properties.

“It’s ridiculous, I know. I don’t even like to admit it to people,” Vanderbilt said, laughing.

His habit started in 2017, when he bought the former fire station at 1805 E. Grace St. in Shockoe Bottom and redeveloped it into retail and office space that’s occupied by Ironclad Coffee Roasters and ad firm Release the Hounds.

A year later he bought the Gallery5 building, another former firehouse at 200 W. Marshall St. in Jackson Ward, and began a lengthy renovation of the 137-year-old building.

Vanderbilt claims he doesn’t deliberately seek out decades-old former firehouses. He said after wrapping up work on Gallery5, he was looking for a turnkey deal that didn’t need work and the Stationhouse building fit the bill.

“I didn’t feel like pushing another project through the bureaucracy,” he said. “We’re in a wait-and-see mode where we’re building liquidity to see what opportunities present themselves. I want to keep an eye on some of the trends in terms of the COVID response.”

The Stationhouse building has a ground floor retail space that’s occupied by Brazilian jiu-jitsu gym Upstream, whose lease carried over in the sale. Above Upstream are six apartments that Vanderbilt said are leased out.

The 6,200-square-foot building was most recently assessed at $745,000. Patrick Sullivan at One South Commercial represented Vanderbilt in the deal, and Dodson Commercial’s Palmer Wilkins represented the seller.

Despite his reluctance to dive into another big project now, Vanderbilt said he’s still looking around Richmond for additional properties.

“I’m a sucker for the architecture (in Richmond). You can’t find that in the suburbs as readily available,” Vanderbilt said. “That’s kind of the appeal for me, being able to add another 100 years of life to a very interesting property.”

Earlier this year he offloaded one of his properties when he sold a former laundromat at 1039 W. Grace St. for $850,000. The buyer was an entity tied to local marketing firm Raison.

I have always seen those old fire houses like station 5 and would love to have one as a home with the big doors, brick walls. As a son of a firefighter I have always loved seeing these as homes and wish I could find one and afford to convert it into a really nice home.