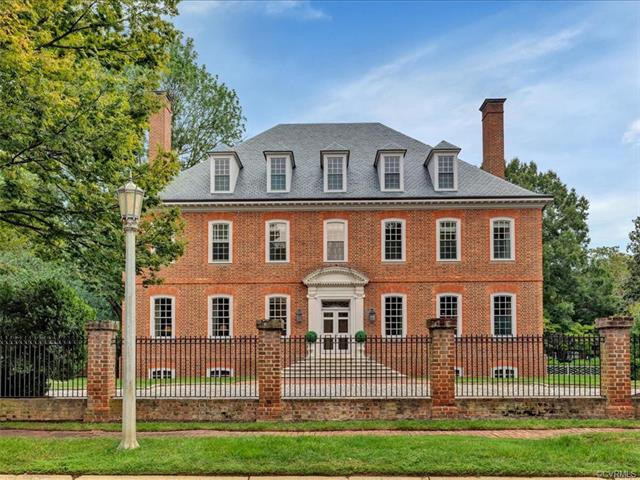 The 10,000-square-foot house at 4300 Sulgrave Road is across the street from Agecroft Hall and Virginia House. (Photos courtesy CVRMLS)

The summer weather may be over, but Richmond’s high-end home market keeps getting hotter.

Former Dominion Energy Chairman and CEO Thomas Capps is putting his Windsor Farms home up for sale with an asking price of $4.45 million. The 10,000-square-foot mansion at 4300 Sulgrave Road was entered into the regional multiple listing service Monday as a “coming soon” listing and is slated to hit the market by Oct. 7.

Sue Farrell with Joyner Fine Properties and Lucy Williams with The Steele Group | Sotheby’s International Realty are co-listing the property for Capps and his wife Sandra. Capps purchased the home for $4 million in 2005, the year he retired from Dominion after 21 years as CEO and handed the company’s reins over to current Chairman Tom Farrell (no relation to Sue).

When the listing goes live, it will be the first time in 60 years that the house has been offered for sale publicly, Sue Farrell said. She and Williams brokered the 2005 off-market transaction between Capps and previous owner Joan Massey, the late wife of E. Morgan Massey, former chairman and CEO of A.T. Massey Coal Co. 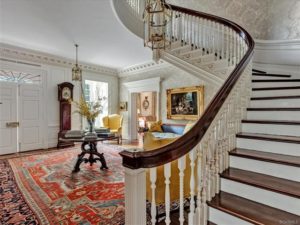 The foyer includes a curved staircase.

The Cappses had been residing a few doors down at the time, in a 6,300-square-foot French-inspired house at 308 Long Lane, which Capps sold in 2006 for $2.47 million. That house, at the end of the dead-end lane, is next door to Agecroft Hall, which the Sulgrave house also faces along with Virginia House.

“Sandy (Capps) had always admired this house from afar,” Farrell said of 4300 Sulgrave. “Quite by accident, she was thinking about relocating from Long, and she had pointed to this house to say, ‘You know, that’s always been my favorite house,’ not knowing that Lucy and I had been talking to Morgan Massey and it was going to be coming up. So they ended up buying it right there.”

Farrell said previous transactions were likewise done on the quiet.

“This is the first time it’s really been marketed to the public,” she said. “It’s a showstopper.”

Totaling five bedrooms with five bathrooms and four half-baths, the 2½-story brick house was designed by noted architect Clarence Huff and built in 1959. Farrell said the original owner was petrified of fire and had the house built devoid of any interior structural wood.

“It is all brick, block, steel and concrete,” she said, adding that the only wood to be found in the house is in its interior detailing and doors. “Everything else internally is fireproof. It’s very rare to have something built like this.” 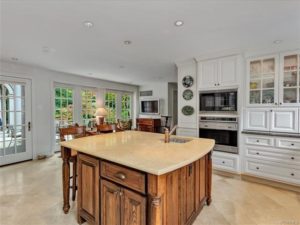 The kitchen includes an island and stone countertops.

Situated on a double lot totaling 1¼ acres, the house includes a foyer with curved staircase, a walnut-paneled library with one of four fireplaces, an elevator, and a solarium that leads to a bluestone terrace with a pergola and fountain.

All of the bedrooms are upstairs with updated bathrooms, and the master suite includes a sitting room, fireplace and two walk-in closets. A lower level includes a second family room with wet bar and wine cellar.

Outside, Charles Gillette-designed gardens frame the property that includes additional fountains, sculptures and plantings that screen a pool and pool house with kitchen. The house also includes an attached three-car garage.

The latest city assessment valued the property at $4.15 million.

Farrell said she and Williams have been getting inquiries on the listing since entering it Monday as a “coming soon” property, an approach she said they took due to the current inventory shortage and the property being offered publicly for the first time. She said the “coming soon” period allows them to field inquiries but restricts them from showing the home until its listing becomes active.

Farrell said they’re planning to hold a private agents’ preview Oct. 1 and activate the listing before Oct. 7, giving them time to have more photos taken of the property. 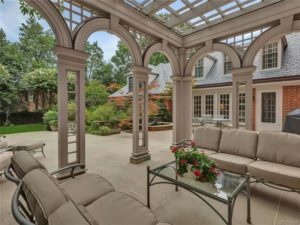 The rear patio has a pergola and fountain.

While they currently hang their hats with different brokerages, Farrell said she and Williams are co-listing the property due to their history with the house and with each other, having previously worked together at Virginia Landmark Corp. before it was acquired by Long & Foster. She said the arrangement is similar to agents who co-list within the same brokerage.

“The fees are divided equally, and it works like magic,” Farrell said. “It actually sometimes diversifies the client base, because Lucy has her client base, I have mine, and in combination, it’s a pretty impressive group of clients.”

Farrell said she expects the home will sell to another corporate executive, though she noted that interest thus far has come from a demographic she wasn’t expecting.

“The inquiries that we have had for the property are younger than you would think,” she said. “They are wanting to stay in the city, they like to be convenient to those downtown operations, but also in some cases are looking at some of the private schools. They’re young families looking for that permanent place where you can raise a family and it would maybe be staying in the family.” 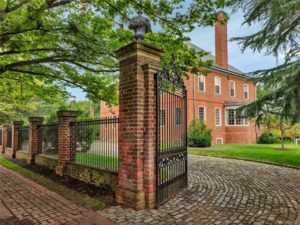 As for the Cappses, Farrell said they are downsizing but remaining local while maintaining several other properties they own out-of-state.

Beyond working with them when they purchased the house, Farrell has another association with the property beyond the coming listing. Morgan Massey, the previous owner, built the house in western Henrico that Farrell called home from 2003 until last year, when she sold it for $2.39 million.

The Sulgrave listing follows closely behind another multimillion-dollar listing that recently hit the market. The nearly 180-year-old Ellen Glasgow House at 1 W. Main St. in downtown Richmond was put up for sale last week with a $3.5 million price tag.

Have you tried clicking on them?