A 241,000-square-foot project is planned for Manchester. (City documents)

The Manchester skyline is prime for another addition, as an out-of-town developer wants to build a riverfront mixed-use project in the neighborhood.

The Beach Co., a Charleston, South Carolina-based development firm, filed plans last week for a 230-unit, six-story multifamily project with commercial space at 700 Semmes Ave., according to plans filed with the city.

The building would rise on a 1.75-acre plot that until 2018 was home to industrial firms Bay Diesel & Generator and Bass Crane Service. 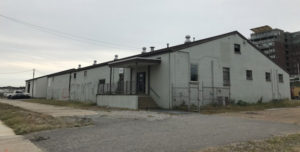 An industrial building currently stands on the site at 700 Semmes Ave.

The project calls for a 241,000-square-foot, H-shaped building that includes 170 one-bedroom units and 60 two-bedroom units that would rent at market rates.

Below the apartments on the ground floor would be 5,100 square feet of commercial space and a 223-car parking garage.

Amenities at the unnamed project would include a lounge, pool and a 2,000-square-foot rooftop deck.

The Beach Co. is primarily active in the Southeast and this is its first foray into Richmond. Development manager Timothy Cotter said his firm initially tried to get in on the Scott’s Addition development boom about five years ago.

“It’s been a long study for us to be perfectly honest,” Cotter said of Richmond.

“We do all sorts of development across product types. We do some single-family, office and industrial, but the lion’s share of our development is multifamily or mixed-use multifamily.”

Cotter said they’ll likely look for commercial tenants that would provide an ancillary service to the building’s tenants and the neighborhood, such as a coffee shop or fitness studio.

Cotter added that they do not own the land, which sold for $2.8 million in 2018 to Richmond 700 LLC. That entity will continue to own the property, as Cotter said his group has a development agreement with the landlord and can’t disclose particulars of the relationship.

The project would add 290 bedrooms across 230 apartment units.

Lory Markham of Markham Planning submitted the development plan on The Beach Co.’s behalf. Walter Parks Architects is listed as the project’s architect and Timmons Group is its engineer. A general contractor has not been selected.

Cotter said they hope to have approvals and designs finalized by mid-2021 and that it will take around 18 months to build out. He declined to provide a budget for the project.

Manchester’s frontage to the James River has seen plenty of new projects get underway in recent years.

The 344-unit River’s Edge II is in the works at 301 W. Sixth St., while work continues on South Falls, a 14-story tower at 111 Hull St. from WVS Cos. and Tom Papa’s Fountainhead Properties.

The duo are also working on South Falls East, a 7-story mixed-use project at 3 Manchester Road. Adjacent to that site, Hourigan Development is in the early stages of a project that would replace the vacant Southern States silos at 2-4 Manchester Road.

A few blocks inland, Papa is also working on The Box, a 7-story, 118-unit apartment project at 511 Decatur St.

Sadly, I didn’t need to be told Walter Parks was the architect. I’m pro this development, but couldn’t the building be a bit more attractive?

. . . and there’s another exciting development (or two, or three) to be announced shortly. Manchester is in a major building mode. I learn about a new deal nearly every week, and I didn’t know about the one in this article. Things are popping!

Mixed use? It is 2% commercial and 98% residential. Reminds me of the 1990/2000s developments Louis used to do calling it restoration when he could find one 40 wall or one 50 sq ft room and get his tax abatement for entire “rehab” even when the old building was les than 5% of the entire new structure.

I like this building that it’s reusing space that was already paved over and has utilities which in turn makes more room.

But I wish the City of Richmond would stop making lame excuses for not fixing the sidewalks in that this building alone will bring in more tax renvue then what the City budgets for sidewalks.

Ugly is subjective, so I won’t even comment on whether I think the building is attractive or not. But I think it is hard to argue that it isn’t BORING. This style has been so overdone. Please Richmond developers, try something new.