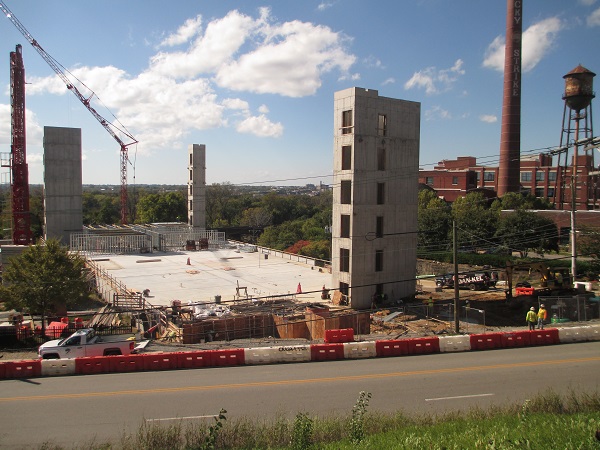 Construction is underway on Shiplock Views, which will reach five stories on the Main Street side. (Photos by Jonathan Spiers)

Foundations are laid and elevator shafts are vertical at the site of Shockoe Bottom’s latest apartment project.

The long-planned Shiplock Views apartments is beginning to take shape near the foot of Libby Hill. The $35 million, 180-unit building by Guy Blundon’s CMB Development brings to fruition a project that’s been years in the making, having gone through two development firms and several redesigns. 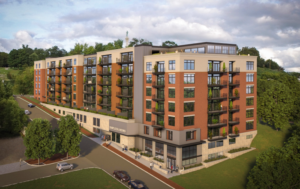 The building’s sloped site will make it nine stories above ground on the river side.

Initially proposed as a much taller project, the version under construction on the sloped site will reach five stories in height on the Main Street side and nine stories above ground on the river side. The new building, at the corner of Main and Pear streets, will add to the adjacent Lofts at Shiplock Watch apartments, which is slated to be absorbed into the new development.

Blundon purchased the 1-acre property at 2801 E. Main St. earlier this year for $2.73 million. He took over the project two years ago from Historic Housing’s Louis Salomonsky and David White, who secured zonings for the apartments in 2017 after a previous proposal for a 13-story condo tower faced pushback from neighbors. CMB also purchased the Shiplock Watch building for $6.6 million this year. 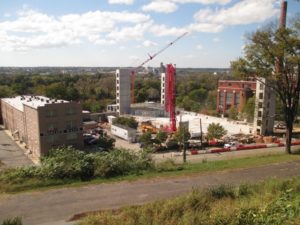 The adjacent Shiplock Watch apartments will be absorbed into the new development.

Purcell Construction is the general contractor on the building, which was designed by Walter Parks Architects. Donley’s Concrete Group is involved in the project, and HG Design Studio designed landscaped parking on part of the site.

The building will include a rooftop deck at the river end of the building, with a clubhouse room flanked by two patios with gas grills and seating areas. Other community amenities include a pool and fitness center.

Site work got underway last fall, and construction is slated for completion this spring. The 51 units in the adjacent Shiplock Watch building will be branded and marketed as part of Shiplock Views but will remain financed through the U.S. Department of Housing and Urban Development.

The project is across Pear Street from the Lucky Strike power plant building, which local ad agency Arts & Letters Creative Co. has made its second office. Another block down, the $40 million Main2525 building by Charles Macfarlane and Sam McDonald recently added 216 apartments to the neighborhood.

Correction: An earlier version of this story incorrectly reported that Guy Blundon’s firm paid more than $9 million for the Shiplock Views site. It in fact paid $2.73 million for the plot, plus $6.6 million for the neighboring Shiplock Watch apartments, for a total of $9.33 million.

It was quite a task getting Guy and Louis on the same page but they took to each other rather well once they became acquainted. The two have an architectural and preservation background that made them fast allies. Louis entertained all of us with his wonderful stories of his days in Nice. Guys son happened to be studying in Nice at the time and that added to the connection. The land price quoted above though isn’t accurate.

Great to see an investor endeavoring to persevere!

Hopefully it looks better than the apartment building down the street at 25th and main st. Hands down the ugliest building ever constructed, maybe in the entire world. Everyone involved, owner, architect, contractor, and city planning should be ashamed of themselves.

Why are just about all of these new developments so gosh darn ugly?