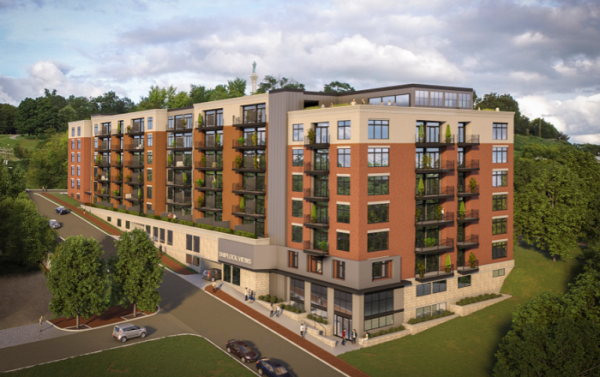 A pair of property purchases in recent weeks has set the stage for a long-planned apartment building near the foot of Libby Hill.

On Feb. 7, an entity tied to Blundon’s CMB Development purchased the existing 51-unit Lofts at Shiplock Watch apartments, which is slated to be absorbed into the new development. The three- and four-story building, totaling about 46,500 square feet, sold for $6.6 million, city property records show.

That transaction followed a Dec. 20 deal for the adjoining vacant parcel at 2801 E. Main St., at the corner of Main and Pear streets, where the new Shiplock Views structure is set to rise. Another Blundon-owned LLC paid just over $2.73 million for the 0.8-acre parcel, which most recently was assessed at $853,000. 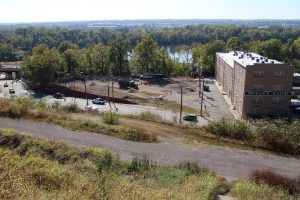 Site work got underway last fall on the triangular parcel beside the Shiplock Watch building. The new Shiplock Views apartments will be built on the opposite side of the building. (BizSense file photo)

Both properties previously were owned by entities tied to Historic Housing, the local development firm led by Louis Salomonsky and David White, who secured zonings for the apartments in 2017. Blundon took over the project the following year and had been under contract to purchase the properties while redesigning the new building, which he originally planned for 144 units.

Historic Housing retains ownership of a third parcel that’s also involved in the project – a triangular-shaped lot on the opposite side of Shiplock Watch that’s planned for 70 surface parking spaces. Blundon said he will lease that lot with an option to buy it later.

Blundon completed the redesign last fall, incorporating a rooftop deck at the river end of the building, with a clubhouse room flanked by two patios with gas grills and seating areas. Other community amenities include a pool and fitness center.

While the redesign allowed for more units, the height of the new building remains five stories on the Main Street side and nine stories above ground on the river side of the sloped site. Building height had been a point of contention for nearby residents with previous development proposals, including a 13-story condo tower that was withdrawn due to concerns from neighbors.

Walter Parks Architects designed the building, and Purcell Construction is on board as the general contractor. HG Design Studio designed the landscaped parking on the triangular lot.

Blundon put the development cost for Shiplock Views at about $35 million, with Atlantic Union Bank in talks to provide financing for the new construction. Blundon said Shiplock Watch will be branded and marketed as part of Shiplock Views but will remain financed through the U.S. Department of Housing and Urban Development.

Site work got underway last fall, and construction is slated for completion in spring 2021.

It was a pleasure to put Guy and Louis at the same table to make this deal. They got along like two lost brothers, making my job as broker very easy. This will be the furthest east of the Main Street developments. Its rooftop deck will overlook the sweeping curve of the James River, a view reminiscent of Richmond on the Thames, from which the City derived its name. It’ll be a special place to live.

It’s been a pleasure to make sure the view from Libbie Hill wasn’t ruined by the several developments that were proposed in this historic view shed. Thank you City of Richmond Planning Department and Planning Commission for passing an ordinance to protect the historic view to make sure it wasn’t co-opted. Richmond will still be a special place to live.