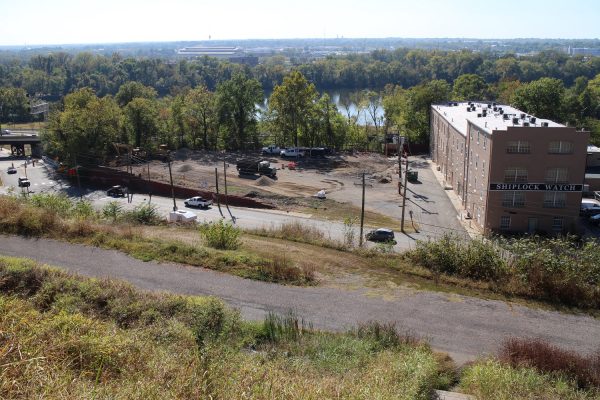 Site work is underway on the triangular parcel beside the Shiplock Watch building. The new Shiplock Views apartments will be built on the opposite side of the building. (Jonathan Spiers)

A year after the project changed hands between developers, a long-planned apartment building near the foot of Libby Hill is beginning construction following a redesign to add more units.

Guy Blundon’s CMB Development has started site work on Shiplock Views, which will rise beside the existing 51-unit Shiplock Watch apartments in the 2800 block of East Main Street, just east of its intersection with Pear Street.

A new building totaling 180 apartments will be constructed at the corner of Main and Pear. Blundon said Shiplock Watch will also be branded and marketed as part of Shiplock Views.

Blundon had originally planned the new building for 144 units, but he said a redesign allowed for that number to increase. 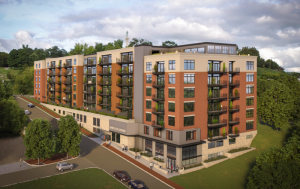 “We redesigned the building, eliminated the drive under and some of the parking decks, and got more space in the building,” Blundon said.

The height of the new building – which had been a point of contention for nearby residents with previous development proposals – remains five stories on the Main Street side and nine stories above ground on the river side of the sloped site.

Blundon took over the project last year from Historic Housing’s Louis Salomonsky and David White, who secured zonings for the apartments in 2017 after a previous proposal for a 13-story condo tower was withdrawn due to concerns from neighbors.

Blundon is under contract to purchase the two parcels, along with a triangular-shaped lot that’s planned for 70 surface parking spaces, in a deal that he said is set to close by year’s end. The latest city assessment valued the three properties collectively at $7.3 million.

Units will range from 670 to 950 square feet, with monthly rents ranging from $1,300 to $2,300. Blundon said 75 percent of the units will be one-bedroom floor plans, while the rest will be two-bedroom residences.

New with the redesign is a rooftop deck at the river end of the building, with a clubhouse room flanked by two patios with gas grills and seating areas. Other community amenities include a pool and fitness center.

Blundon put the development cost at about $35 million. He said he’s talking with Atlantic Union Bank to provide financing.

New renderings of the building by Richmond-based RenderSphere show a building façade predominantly made of glass and brick. Proffers included with the site’s zoning require a minimum of one parking space and one window per apartment.

Blundon worked with Walter Parks Architects on the design, and Purcell Construction is on board as the general contractor. HG Design Studio designed the landscaped parking on the triangular lot.

Site work on that lot got underway in recent weeks, and Blundon said he’s aiming for completion in spring 2021.

Another terrific development from Guy Blundon with more to follow. I was pleased to have linked Guy and Louis on this deal while I was with Colliers International and look forward to continuing to work with their teams as a member of Commonwealth Commercial Partners.

Yes, I’m back in the saddle again, launching the sale of Signal Hill Apartments in Mechanicsville today at 9am.

If people hadn’t spoken out about this project and several others proposed for this site the view from Libbie Hill would have been blocked. I hope the mechanical farm on the roof is screened. I heard that the planning department from Tottenham England weighed in on this project, where Richmond on the Thames is located.

Fugly and frankly embarrassing for the city, and that’s saying something.

It looks like just about everything else built in recent years. It will be fine as an infill project, filling a need for housing in the area.

Says who? Looking “like everything else” aka, fugly, is lazy and lacks foresight. If no one loves this development than why should the tenants? The answer is that they won’t, and will become a blighted POS building sitting in the middle of one of the most beautiful areas and views of the city.

Actually simply calling something fugly is kind of lazy. What is it you don’t like about it? Do you want it to be more tiered, have more balconies, have a greater demarcation of zones, different materials, look like the plain warehouse next door? Not offering an effective critique doesn’t help to move the discussion and architecture forward. There are a good number of development professionals that read this site and most, if not all, are open to honest suggestions on how to improve their properties.

Not the original poster but it’s a Walter Parks 101… No sense of place or context, looks like every other recent build. That said it’s inoffensive, it will fill up rapidly I’m sure. But it could be much much better. You could drop this into Manchester, downtown, or SA and no one would be surprised. That’s a hallmark of mediocrity there. No real sense of entrance, no real relation to area or street, just a basic box for living in that does not add to the built environment. It doesn’t detract either, but I get the use of the word… Read more »

How much creativity does the architect have? They likely got the job because the client liked their work. The client also has a budget. Many times the architects’ hands are tied as they serve their client. Perhaps less should be said about WHO did the design and more about what the CLIENT has requested, paid for and approved. Or city officials.

I have no connections or knowledge of the developer or architectural firm, but I do know that aesthetics are not free, nor are they automatically supported by economic conditions.

Unfortunately, this project started with more interesting designs but over the years the Hill has slowly whittled it down to what you see here. Personally, I think the design is fine. It will be completely unassuming from Main Street and Libby Hill while fully utilizing the hillside. It blends well into the existing fabric with hints from the gorgeous Lucky Strike complex, while not trying to be a faux historical property itself. The amenities take full advantage of the river views and the building adds an appropriate density to the space. Now it will be up for a developer across… Read more »

Richmond has much worse when it comes to recent architecture, the recent canal walk building comes to mind. Richmond (& our planning agencies) should show higher self esteem and demand more of the buildings that will come to define our city. This project is ok though and needed infill as Justin notes.

Really, can we just…….it is not our job to design these buildings, it’s up to the architects and the developers to present projects that add to the fabric of our shared community. Architecture tells a story using the vocabulary of context, massing, detail and materials. The story this building tells (and a lot of recent projects built lately) is “what is the least amount of effort will it take to make me, as the developer, the most amount of money. You all will just have to live with the consequences.” Period. You can walk three blocks from this site and… Read more »

Kinda looks like the residence Inn Marriott in shockoe slip if it was converted into an apartment building.

Design of buildings is governed by City code and ordinance which was largely enacted during the Robert Moses era. If a developer wants to build something interesting we essentially live and die by Special Use Permit. SUP could be a four letter word to lenders depending on the property. This view, the Church Hill neighborhood it’s history is unique and should be preserved. Modern infill design can be done in a respectable way, of course opinions vary. It’s a win for the City in terms of taking a vacant lot and turning it into housing, putting an asset on the… Read more »