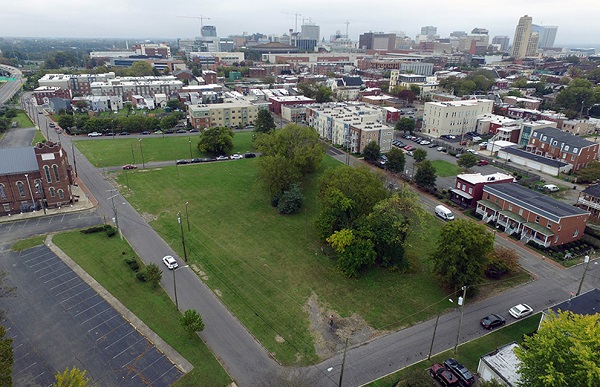 The unimproved city block is across Duval Street from Sixth Mount Zion Baptist Church in Jackson Ward. The smaller block beside it is not included in the project. (Michael Schwartz photo)

A local housing nonprofit didn’t have to look far for its next income-based apartment project in Richmond.

Better Housing Coalition is under contract to buy an entire city block in Jackson Ward, where it is planning to build a 67-unit apartment building for lower-income renters.

The 1.5-acre site, bordered by Jackson, Price, Duval and Cameo streets, is across Duval from Sixth Mount Zion Baptist Church along the south side of Interstate 64-95. It’s also just blocks from BHC’s headquarters on Broad Street in the Arts District.

The land is owned by developers Robin Miller and Ron Stallings, who assembled the 16 parcels that make up the block in 2006 and 2007 through an entity called Jackson Commons Partnership LLC.

Better Housing CEO Greta Harris said the site came to BHC’s attention as it was looking for more development opportunities in the city.

“We were made aware of this site assemblage that had been done years ago, and timing is everything,” Harris said Tuesday. “We approached them about the possibility of selling to us, and we were able to strike a deal.”

Harris said BHC is set to close on the property by the end of the year. The unimproved parcels most recently were assessed by the city at $865,000 combined.

“The location is particularly advantageous,” Harris said, “because it’s within a block or so of multiple bus lines, within a few blocks of Broad Street with more transportation options and, as our downtown gets stronger again, more jobs and other amenities within walking distance.” 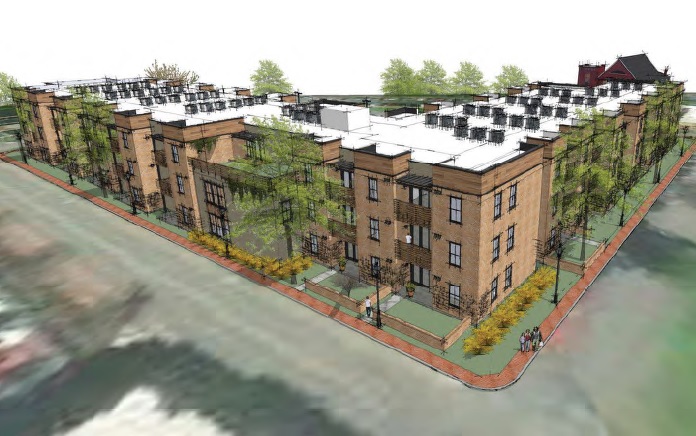 A rendering of the apartment building planned by the Better Housing Coalition. (Courtesy of Baskervill)

Tentatively called “Cameo House,” the to-be-named community would consist of one-, two- and three-bedroom apartments with monthly rents ranging from $650 to $1,150. The bulk of the units will be restricted to households earning between $21,000 and $51,800 a year, or between 40 and 60 percent of the area median income. Twelve units will be reserved as subsidized housing for tenants who would pay no more than 30 percent of their income on rent.

The building would total 76,500 square feet and rise three stories, consistent with surrounding structures. Amenities would include a two-story community space, balconies on some units, a playground, off-street parking and energy efficiencies.

Baskervill is designing the building, and Timmons is handling engineering services. Harris said a contractor has yet to be selected. Construction would start in early spring next year and wrap up by summer 2022. 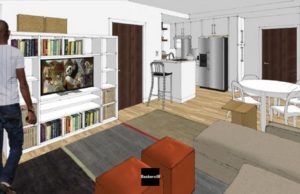 An interior rendering of one of the proposed apartment units. (Courtesy of Baskervill)

Harris put the overall cost of the development at $11 million, to be paid for with funding commitments from the City of Richmond, Virginia Housing, the Virginia Department of Housing and Community Development, and other sources. Richmond Redevelopment & Housing Authority would provide rental assistance.

The apartments would add to other housing that has been filling out parts of Jackson Ward in recent years. A couple blocks east, RRHA and Community Preservation and Development Corp. recently finished the mixed-use Jackson Place development.

CPDC, now the real estate development arm of Maryland-based Enterprise Community Development, also is converting the former Baker School building across the interstate into apartments for seniors. The nearby St. Luke Building also was converted to apartments earlier this year by local developer Charley Ayers.

BHC’s Jackson Ward project comes just as the nonprofit recently opened the doors of its latest community in the region, Market Woods, a 55-and-up apartment complex off Route 1 in Chesterfield County. Harris said the 60-unit community is 50 percent leased with full occupancy expected by the end of January. UrbanCore Construction was the contractor on that project, which is located on BHC’s 60-acre Winchester Greens campus.

Harris said BHC is planning another project at Winchester Greens: a 120-unit development called Winchester Forest, which she said is on a similar time track to the Jackson Ward apartments. She said the nonprofit also is pursuing rezonings in Chester and Midlothian for two projects for which it would apply for housing credits next spring.

BHC also has been named master developer for the rest of Highland Grove, a redevelopment of the former Dove Court public housing community in Richmond’s Northside. RRHA and Richmond Public Schools submitted plans for the final phase of that community last year, and an announcement about the project moving forward is scheduled later this week.

“Part of our strategic plan was to really step up our development activities,” Harris said of BHC’s increasing workload. “There is a great need for more quality, service-enriched housing in the region and also in the city.”

There’s a dire housing shortage across America pushing up sales prices, rents and assessments. Zillow reports that the number of pending sales of homes as of 9/25 are up 25% over the same day one year ago. People are taking advantage of the 2.5% 30 year mortgages to move up. Despite the recent challenges to employment and the surge of new apartment construction locally, apartment owners are reporting a very healthy lease up market. The sector at the bottom is where the “hurt” occurs, as quality, affordable housing is lacking in numbers. Companies like BHC, CPDC, and Crescent are working… Read more »

With all due respect, Bruce, I prefer to rely upon the free market to supply goods and services (including housing). When governments subsidize housing (or anything else) they distort the market, pushing out those who would otherwise compete to supply lower cost housing. True, lower cost housing would end up I less desirable areas, but that is no different than lower income folks driving older, less desirable cars.

You’re on the mark, as usual. Our company has been involved in countless affordable housing projects in NYC. Why? Because affordable housing needs to be affordable to build and to own/operate. Super energy efficient, low maintenance, long-lived and high quality housing at economical prices is an affordable win for all stakeholders.

Thanks for caring, not everyone is working high paying jobs.

Thank goodness they’re getting rid of that hideous green space.

Everyone loves “green space” no doubt. However you can’t fault a land owner who paid a lot of money for those pieces of land for selling it. If you want public parks that should be at the expense and planning of the local govt. I lived in the far west end 20 years ago in a new neighborhood next to farm fields. I was always amazed that all my neighbors got mad when they built a subdivision just like our right next door and everyone complained that they thought they were buying land next to open space even though they… Read more »

One should never buy their house for the view and privacy someone else’s property affords them. A neighboring private property owner does not owe anyone the duty to keep, maintain, and pay taxes on unimproved land so someone else can enjoy the perks of the land they don’t own. Assume if it’s a desirable area, there may not be something there today, but there will be tomorrow. Follow that motto and there will be less regret.