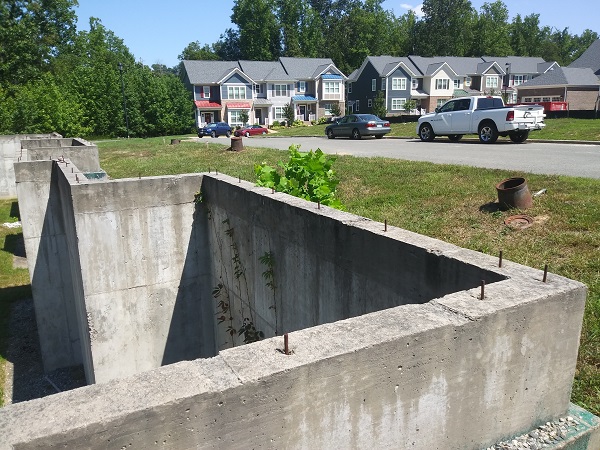 Foundations for the last townhomes at Creek’s Edge at Stony Point have been waiting to be filled for years. (Jonathan Spiers photo)

Correction: The architect for the townhomes was misidentified in the original story. Commonwealth Architects is the firm that designed the units.

More than a decade after its first units were built, a townhome community beside a struggling Richmond mall is set to be completed with a builder lined up to finish its final section.

Moneymaker Properties has started work on the last homes planned for Creek’s Edge at Stony Point, a gated townhome development started in the late 2000s by Steve Middleton of Commonwealth Properties, which also developed the adjacent Creek’s Edge apartments.

Since Commonwealth built the bulk of the property’s 100-plus homes through about 2013, remaining lots have been built out in waves by local builders StyleCraft Homes and LeGault Homes. But a final section of 25 townhomes and two houses remained to be done.

An elevation rendering of the new townhomes. (Courtesy of Patrick Sullivan)

Enter Jason Moneymaker, principal of his namesake firm, who is picking up where Middleton left off with those lots, laying bricks and blocks on top of concrete foundations that were laid and left years ago.

Moneymaker said he was brought into the project through conversations with fellow One South Realty Group agent Patrick Sullivan, who is marketing and listing the new units. Moneymaker said Middleton was looking for a builder who would make finishing the section a priority.

“My deal with Steve was that if I came in there, I wouldn’t accept anything else in the time being unless we were way ahead of schedule, so that would have my full concentration,” Moneymaker said.

The project is Moneymaker’s first crack at townhomes, having previously focused his firm on historic rehabs, house flips and infill projects in the city. He’s following the designs of Commonwealth Architects, the development’s original designer, while adding some updated touches to the interiors, he said. 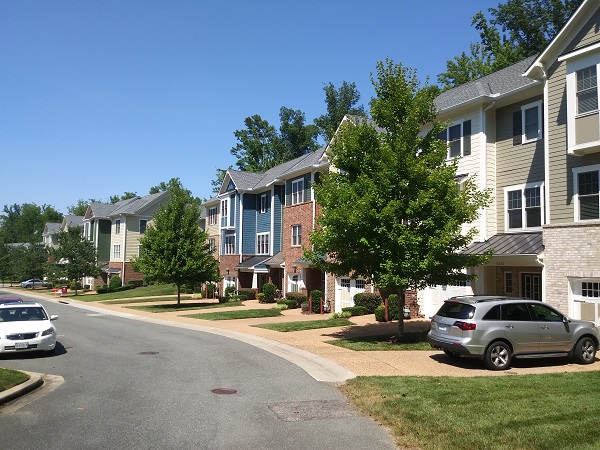 The 100-plus existing townhomes have all been sold. (Jonathan Spiers photo)

“Being that it’s (a homeowners association), we’re trapped within a certain façade on the exterior for the most part. But being that those plans were probably 10, 12 years old at this point, we went back to the drawing board and revamped the interior layout and made some aesthetic changes to modernize it a little bit more,” he said.

Moneymaker said the interiors would have more of a modern, minimalist look, moving away from their predecessors’ Craftsman-style designs. The units will consist of 18 three-story townhomes ranging from 2,500 to 2,700 square feet in size, seven two-story layouts at about 2,100 square feet each, and the two houses with rear garages and customizable floorplans at about 3,000 square feet.

The three-story units will have three or four bedrooms and will be housed in three buildings with garage parking underneath. The units will include finished basements, full bathrooms, and hardwood floors throughout, Moneymaker said. The two-story units also would include attached garages.

Moneymaker said he and Sullivan have some prospective buyers lined up who have expressed interest in the homes. He said they’re finalizing their marketing and website and expect to start sales in coming weeks. 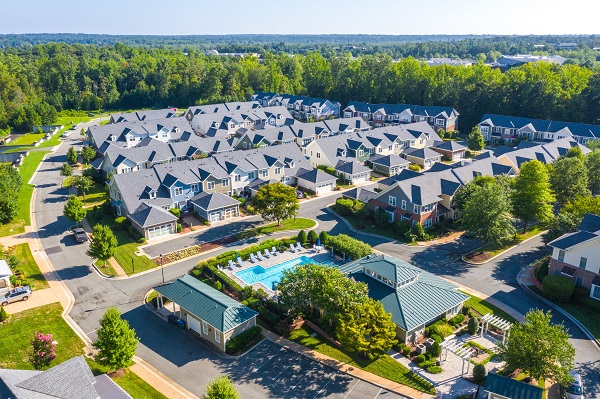 An aerial photo of the existing community. (Courtesy of Patrick Sullivan)

Located at the northern end of the community, the new homes will feature views of adjacent tree lines and wetlands, which make up about half of the 36-acre townhomes site. Moneymaker said master bedrooms would be positioned to take advantage of the open-space views behind the units.

He said construction is expected to start going vertical in the next four weeks, with the final units finished within 24 months.

The completion of Creek’s Edge comes as Stony Point Fashion Park continues to see a flux of tenants, with some retailers bailing and others moving in. Despite the mall’s struggles over the years, all of the Creek’s Edge townhomes built so far are owned and occupied, Moneymaker said.

The area has seen additional investment in recent years with the construction of the 280-unit James River at Stony Point apartments, at the other side of the mall. And talks continue about a potential revamp of the area, with the mall highlighted among other planning priorities in the city’s Richmond 300 master plan update, which is on track for adoption later this year.

Nice work, Jason. Patrick certainly has his finger on the pulse.