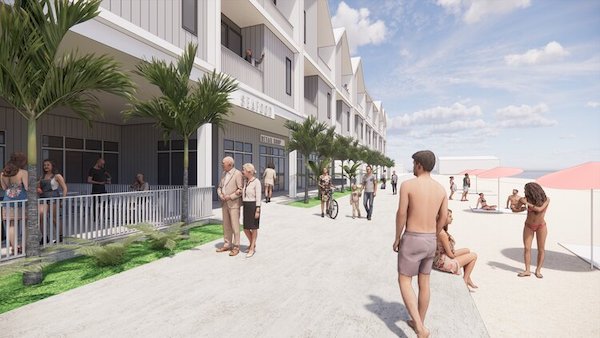 A rendering of the beach-front townhomes and commercial space planned for Colonial Beach. (Courtesy of Dodson Development)

Two years ago, the town of Colonial Beach decided it wanted to start marketing itself as a tourist destination for Richmonders, Washingtonians and others around the Commonwealth.

The town, with its seasonal population of about 3,500 split between full- and part-time residents, is geographically positioned to do so, sitting on the Northern Neck and with beachfront land facing the Potomac River.

Last week, the town announced another step toward drawing in visitors with the help of Richmond developer Duke Dodson.

His Dodson Development bought 5 acres for $2.7 million, on which it is planning a multi-phase, mixed-use project that’ll add townhomes, a hotel, office and retail space adjacent to Colonial Beach’s Town Hall at 100 Wilder Ave. and 301 Douglas Ave.

While the four-phase project won’t reach full completion until mid-2024, Dodson, who is president of the firm, said the project came together relatively quickly after he got word of it in mid-March.

“It just got me really excited. I was looking at it for me and my family because we were looking for a river or lake destination. In Richmond, you have a couple of river or lake options but none stands out as obvious,” Dodson said.

“Colonial Beach is close to Richmond, D.C. and Fredericksburg, but it has a historic downtown and it’s a golf cart town. Based on a lot of factors, I feel like the time’s right for it.” 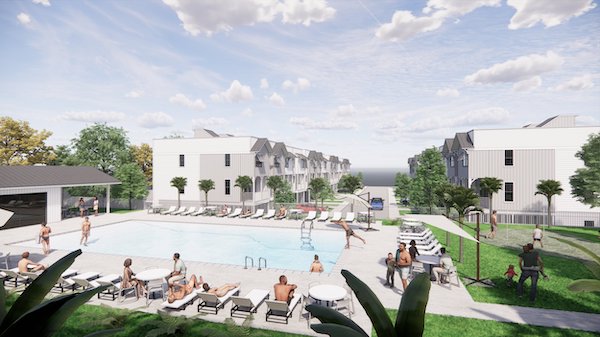 The project’s first phase includes building 35 townhomes to start in the mid-$300,000s. The second phase calls for the renovation of three existing commercial spaces in Colonial Beach’s downtown. Those will be followed by 36 waterfront condos along with 10,000 square feet of retail space. A boutique hotel will round out the project.

Dodson said he expects the total project cost to surpass $25 million. He said his family will personally own one of the townhomes and his Dodson Property Management will lease one of the office spaces that’s being renovated.

As for retail, Dodson hopes to bring in what he describes as “boardwalk-friendly” tenants.

“We’ll be marketing to places like coffee shops, ice cream shops,” he said, noting that one of the commercial spaces being renovated is an old bank building that he’s already shown to some breweries.

It’ll be among Dodson’s largest projects to date, and his first outside of Richmond, where he’s developed a Gather-anchored project in the Arts District, and the former ARC building in Scott’s Addition that’s now home to Gelati Celesti, Potbelly Sandwich Shop and High Point Barbershop.

“I’ve never developed outside of Richmond because I’ve always said I want to develop stuff that I can walk and see,” Dodson said. “It’s pretty exciting. We’ll spend a lot of time out there in the summers in the coming years. It doesn’t feel like a foreign market and I’m getting more and more comfortable with it by the day.”

It’s been interesting to watch the Duke Dodson real estate empire expand over the last decade. His Gather on East Main Street was a revelation in changing mores of doing business collaboratively, unlike anything my generation was used to. Hopefully his new development at Colonial Beach will bring new life to that stretch of the Potomac River. I can recall gambling boats moored to piers back in the 1950’s when slots were first legal in Maryland but not Virginia. The state line is one foot into the river water, and all of the Potomac is in Maryland, so though one… Read more »

Looks to be a great development. Duke is one of the hardest working people I know and has built a great team around him. Judging by his track record this will be a great project.

thx Chris, hope you are well

I am looking forward to this development. Drawings look nice. Can’t wait!

I hope I’m part of it.. Iv been in retail Restaurants for 30 years. I would love to be a part of an organization that’s going to make this beach a winner for the locals. Kids and vacation people ahead. This place has endless possibilities. I’m ready. Bring it.