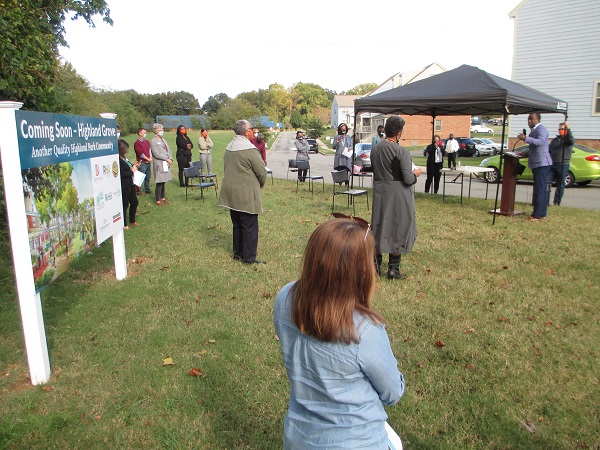 Richmond Mayor Levar Stoney takes the podium during a ceremony Friday to kick off the next phase of the Highland Grove mixed-income community. (Photos by Jonathan Spiers)

With a master developer selected and a team of collaborators signed on, the final phase of a long-stalled redevelopment of a Northside community is set to go forward.

A group of city officials and project supporters converged Friday afternoon to kick off the next phase of Highland Grove, a mixed-income development filling the area around Dove Street that was formerly the Dove Court public housing community and a pair of blighted apartment complexes.

Better Housing Coalition is leading the project for the Richmond Redevelopment & Housing Authority, which selected the nonprofit as master developer through a competitive process. Also involved are the City of Richmond, Maggie Walker Community Land Trust, Richmond Metropolitan Habitat for Humanity and Project:Homes. 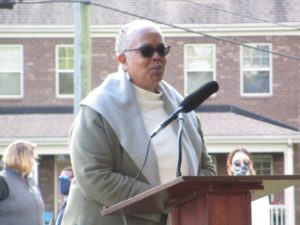 Ahead of the event, Harris said BHC will work with the other groups to finish off the redevelopment that had been stalled since the first phase was completed in 2013.

“This has been a vision of the community for a long time,” Harris said. “We’re very honored to have competed and been chosen as the master developer and to be able to work with our buddies to create equitable homeownership options in the city of Richmond, at a really wonderful location that’s less than 10 minutes from downtown and all of the amenities that are there.”

Estimated at $35 million, the second phase is planned to add at least 122 attached and detached homes on about 40 acres across Dove Street from Highland Grove’s first phase, which consists of dozens of buildings containing 128 income-based rental units between First Avenue and Richmond-Henrico Turnpike.

RRHA submitted plans for the final phase last year along with Richmond Public Schools, which plans to renovate the adjacent Overby-Shepherd Elementary School as part of the project. 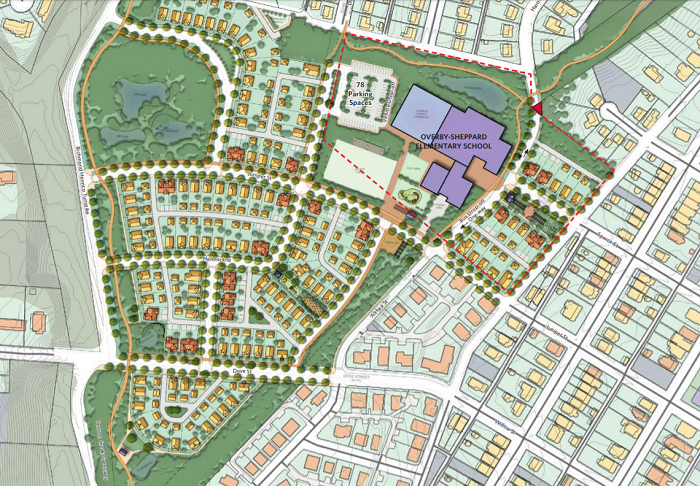 A site plan for the next phase of Highland Grove. (Courtesy of Urban Design Associates)

Phase two also would include common areas and open space, an extension of Harold Avenue and a public street and alley network. A portion of the school property, the site of the former National Guard Armory, is to be allocated for part of the development.

The new units would consist of two-, three- and four-bedroom detached and attached homes for households making from $40,000 up to $97,000 a year depending on family size. The one- and two-story units would include energy efficiencies, high-efficiency appliances and “smart home” technology. 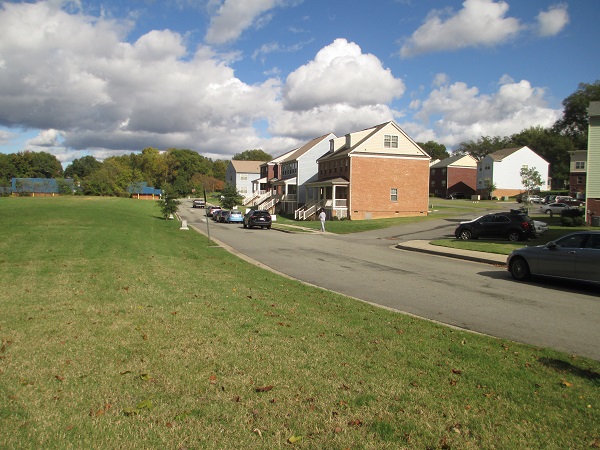 The final phase will continue where the first phase left off, filling land around Overby-Shepherd Elementary School visible in the distance.

Harris said planning for the phase would start early next year, after an agreement with RRHA is executed in the next few weeks. She said they’re aiming to start site work next fall, with the first of the new units coming online in spring 2022.

Qualifying households will be eligible for a variety of down payment and closing cost assistance grants, details of which are to be posted in the spring. Harris said the new units would serve a mix of incomes while helping to meet the housing needs of some of Richmond’s more underserved communities.

“We’re very excited, given that homeownership rates with communities of color are at like a 50-year low,” Harris said. “We look forward to being able to provide for wealth-building homeownership opportunities for a wide variety of homebuyers.”

Friday’s announcement came as BHC also is readying for another development in Jackson Ward: an $11 million, 67-unit apartment building that would fill a city block across Duval Street from Sixth Mount Zion Baptist Church.

“We’re very excited, given that homeownership rates with communities of color are at like a 50-year low,” Harris said.

I thought the price of these homes was income based, not race base.

theres a serious discrepancy in income levels between whites and people of color. but you are right; she made an error in judgement in her remark