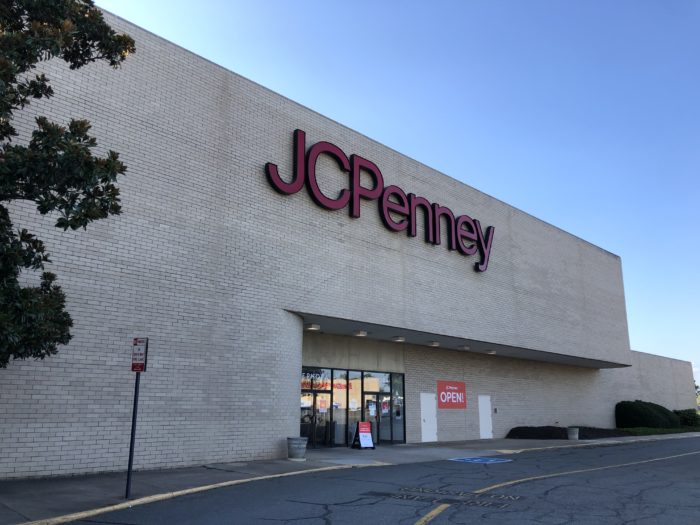 JCPenney sold its store at Regency to the mall’s owners last week for $3.1 million. (BizSense file)

Regency’s owners have another 159,000 square feet to play with as they mold the mall’s future.

Rebkee Co. and Thalhimer Realty Partners jointly spent $3.1 million to purchase the mall’s JCPenney store from the Texas-based retailer in a deal that closed Friday. JCPenney, which is shuttering stores as part of a restructuring precipitated by the coronavirus pandemic, announced this summer it would close the Regency location.

The JCPenney property was most recently valued at $3.2 million, according to county property records.

The JCPenney store is still open, and is expected to close before the end of the year, said Steven Bonniville, president of Broad Sky Management, which manages Regency.

The use of the space beyond that hasn’t been determined yet, Bonniville said, but as an anchor property, the JCPenney site will play a key role in the reimagining of the Henrico County mall.

“We’re working on a plan for that space and have gotten interest from users who are interested in being part of Regency,” Bonniville said.

The mall owners now own all the legacy anchor spaces at the mall, which saw its big-box tenants trickle away in recent years. Macy’s left its two locations in the mall in 2016, and Sears followed suit the following year.

The mall is shifting toward an experiences-oriented, mixed-use destination to maintain its relevance as consumers cool on the traditional retail-heavy mall concept. Regency unveiled its first new anchor in October — an indoor trampoline park in part of one of the former Macy’s buildings.

A NOVA Aquatics swimming facility is on tap for part of the other former Macy’s building, and apartments are being constructed on the site of the former Sears.

The one legacy Regency parcel that has eluded the Rebkee-Thalhimer group is the Firestone Complete Auto Care on the mall’s east end, which is owned by Bridgestone Corp. Bonniville said he wasn’t aware of any conversations about an acquisition.

JCPenney, meanwhile, hasn’t made any announcements about the fate of its other Richmond-area stores. It’s spot at Virginia Center Commons is under contract to be sold to that mall’s owners, a group made up of Rebkee and Shamin Hotels, said Bonniville, whose company also manages that mall.

The JCPenney stores at White Oak Village, Chesterfield Towne Center and Southpark Mall remain open and no closure announcements have been made, but Southpark Mall’s owner recently filed for bankruptcy.

“The one legacy Regency parcel that has eluded the Rebkee-Thalhimer group is the Firestone Complete Auto Care on the mall’s east end, which is owned by Bridgestone Corp.”

According to Henrico County records the Firestone building is owned by SMBC Leasing and Finance Inc. which is a affiliated with Sumitomo Mitsui Banking Corporation (SMBC).

I give thanks to the Rebkee-Thalhimer group for taking on the redevelopment of Regency. They saved RVA from what might have become a blackhole. The icing to the cake is the quality produce they produce. Hats-off to them!