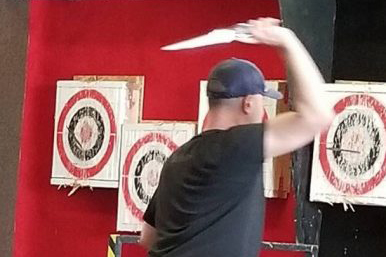 Dan Pegg, who has been involved in competitive axe and knife throwing, is opening Shield and Sheath Hatchet House with his wife Tamera. (Courtesy of Dan Pegg)

Tamera and Dan Pegg are heading to Scott’s Addition after two years of throwing axes in Goochland, and this time they’re bringing knives with them.

The wife-and-husband duo is preparing to open Shield and Sheath Hatchet House, an axe and knife-throwing venue at 1511 Altamont Ave. in Scott’s Addition.

The Peggs are co-owners of The Virginia Axe Co. in Rockville, which they opened with business partners Greg and Kathy Ullmann in 2018.

The Virginia Axe Co. was among the first axe-throwing venues to arrive in Richmond, and its success has led the Peggs to go out on their own and open Shield and Sheath.

The new venture will add a small wrinkle to differentiate it from The Virginia Axe Co.

“It’ll be an equal knife- and axe-throwing venue,” Dan Pegg said. “This will be geared more toward knife throwing. It’s sport knife throwing, so it’s nothing super sharp.”

Knife throwing lanes are set up a bit differently than their axe counterparts, Pegg said, noting that participants throw three knives per turn at smaller targets. He acknowledged how the notion of recreationally throwing knives may seem taboo, but insists it’s a safe activity.

“We’re so uptight in the U.S. If you go to Canada, it’s not unusual to decide if you want to go bowling or knife throwing in Toronto,” he said, laughing. “I get it, (knife throwing) sounds really dangerous and mysterious. But at the end of the day, anybody that tries it loves it.”

Shield and Sheath will be owned wholly by Tamera, with Dan involved as an adviser. He said he’s thrown axes and knives competitively on U.S. national teams.

They’re planning to set up leagues for axe- and knife-throwing at the new spot. It’ll also have a section for darts.

“We’re going to take a serious stab at some dart leagues as well, for lack of a better term.” 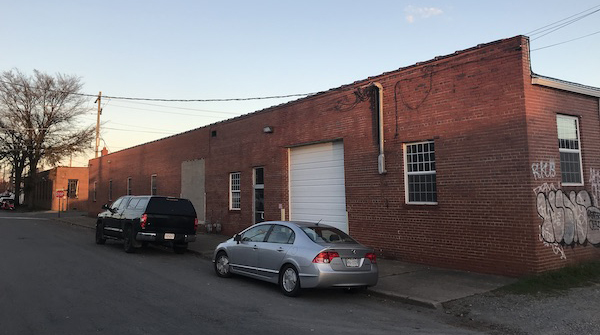 Shield and Sheath is leasing about 3,200 square feet on Altamont Avenue, which will house 18 throwing lanes and a kitchen. Matt Hamilton of CBRE represented the Peggs in lease negotiations.

Pegg said they’ll serve some local beer and wine but will have limits on how much each participant can drink.

“Thing about this business is people only come in for an hour to an hour and a half. The stigma is they come in and get loaded, but we’re not a bar,” Pegg said.

The food menu will include some standard bar food, with a focus on pizzas, Pegg said.

Shield and Sheath is aiming to open in April 2021 with a staff of about 12. Pegg said the buildout will be pretty light, though they are installing a roll-up garage door and some new windows. Johannas Design Group is the project’s architect.

Meanwhile, another axe-throwing operator seems to have put its Richmond plans on hold for a second time.

Ontario-based Bad Axe Throwing had previously signed on to open nearby at 3100 W. Leigh St., though work on that site has halted in recent months.

The chain had initially planned to open at 2035 W. Broad St., however Bad Axe scrapped those plans last year.

I trust their endeavor will hit the mark!