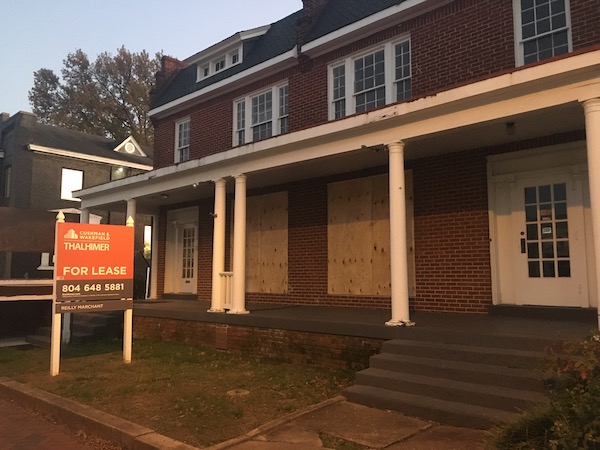 Minglewood Bake Shop will open at 3337 W. Cary St. next year. The building was previously home to Guitar Works, which left the space in 2018 after 40 years. (Jack Jacobs photo)

The sound of music in a former Carytown guitar shop will be replaced with the smell of vegan baked goods.

Minglewood Bake Shop recently signed a lease at 3337 W. Cary St., where it will occupy 1,400 square feet on the first floor of the building that for 40 years had been home to Guitar Works. The fully vegan bakery and deli plans to open in early 2021.

In addition to baked goods and desserts like cakes and scones, Minglewood will also have a cafe serving plant-based meats and cheeses. The bakery will have gluten-free items as well.

Behind Minglewood are Chris Sheehy and his wife, Shannon, as well as their daughter Corri Sheehy. Corri is currently a baker at WPA Bakery, and her parents run Minglewood Trading, a custom signage and decal outfit based in Chesterfield County.

While there are vegan restaurants in town, and other bakeries might do a few vegan menu items, the trio thinks there’s an opening for a fully vegan bakery, Chris Sheehy said.

“We feel like it’s an underserved market in Richmond,” he said, adding that he, his wife and his daughter are vegans themselves.

The bakery plans to focus on takeout when it opens, given the restrictions and public health guidelines of the coronavirus pandemic. As such, the Sheehys wanted a Carytown location to take advantage of the neighborhood’s foot traffic.

“Especially during the pandemic, walk-up service will be huge for us,” Chris Sheehy said.

The bakery plans to offer limited outdoor seating on the building’s porch, and eventually wants to have an indoor cafe with seating in the future. In addition to the co-owners, the shop will have five employees when it opens. Chris and Shannon plan to continue to operate Minglewood Trading, while Corri would work full-time at the bakery.

The former Guitar Works building is owned by a group led by investor Craig Suro. The group bought the property in 2018 for $675,000 after Guitar Works closed after four decades in business.

Ron Felmus, a partner in the ownership group, said the building will be split between two tenants, with its second floor occupied by an office user.

Felmus said the office tenant wasn’t ready to go public with its lease yet.

He said the ownership group feels good about the property’s future given the new leases, Carytown’s walkability in a time of pandemic and the upcoming Publix-anchored Carytown Exchange development.

“The property isn’t only an investment but something we want to be a part of for a long time,” Felmus said. “We are very excited about the prospects at Carytown.”

My spouse and I (both vegan) live within walking distance – can’t wait! I hope it can last even starting during the pandemic.