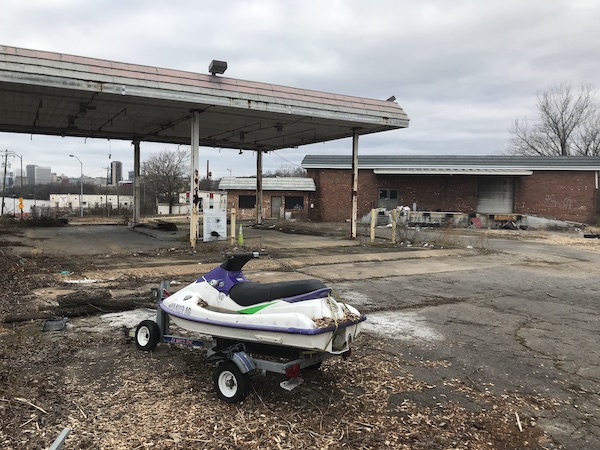 A seemingly abandoned jet ski, along with a vacant fueling station, currently sit on the site of a proposed apartment building. (Mike Platania photo)

The next phase of Rocketts Landing is ready to lift off.

PRG is a Philadelphia-based real estate investment and property management firm with which WVS has worked on many of its projects. PRG CEO Sam Foster said his company owns a stake in and manages other WVS properties, including Innslake Place, East 51 at Rocketts Landing and the Locks and South Falls Towers downtown.

“We let (WVS) do the development, we don’t deal with that at all. We’re the majority of the equity and we manage all the properties, too. We’re the operating partner and the equity partner,” Foster said.

The project will sit on just under 4 acres near the intersection of Nicholson and East Main streets, including the 1.9-acre eastern portion that was the subject of this latest deal. WVS owns the western 1.9 acres at 4401 E. Main St. Foster said PRG won’t be purchasing the remaining acreage.

The majority of the F-shaped building’s apartments will be 618-square-foot, one-bedroom units that will rent for about $1,300 per month, around $2.10 per square foot per year.

The complex also will feature 248 parking spaces and 6,800 square feet of office space on the ground floor.

A fueling station and a pair of small buildings, all of which are abandoned, currently sit on the property, and Foster said they’re preparing to break ground any day now.

As work gets underway on Block 8, Foster said many of their other projects with WVS are approaching the finishing line.

“The South Falls tower’s in lease up right now, and Innslake should be delivering in June,” Foster said.

Just east of Rocketts Landing, a North Carolina-based developer is working on Fulton Yard, a phased, mixed-use project on 23 acres on the Richmond-Henrico county line.

This City continues to grow in every direction, defying the negative predictions of those who’ve said that political change is killing the momentum here. I see nothing but further success and positive growth in Richmond’s future.

You may be right. However, I would like to know if the deal was so far advanced that nobody could back out even after assessing the impact on the city of the protests along Monument Avenue. Does anyone know?

Bruce is 100% correct. Covid-19 has caused a lot of issues with certain businesses, especially restaurants and brick/mortar retail, but the protests haven’t. The protests presented an issue for a point in time and some people will blame them on why they refuse to visit again. However, that demographic didn’t visit here much in the first place. People act like hordes of out of towners came to see the monuments and then they stuck around all day to spend lots of money. I know the opposite to be the case: plenty of people think we are a backwater town that… Read more »

I personally think the monuments need to be in a museum, perhaps on Monument Avenue, specifically dedicated to teaching about confederate Lost Cause mythology and explaining their place in the history of propaganda, racial oppression, etc. Let folks who want to see them see them, but present them with facts and force them to think.

Anyone else notice that the same people saying we need to keep the confederate monuments so that we do not forget history, were also the ones saying that we should not erect slavery memorials because that should be taught in the classroom instead?

Is that Kenny Powers’ jetski?