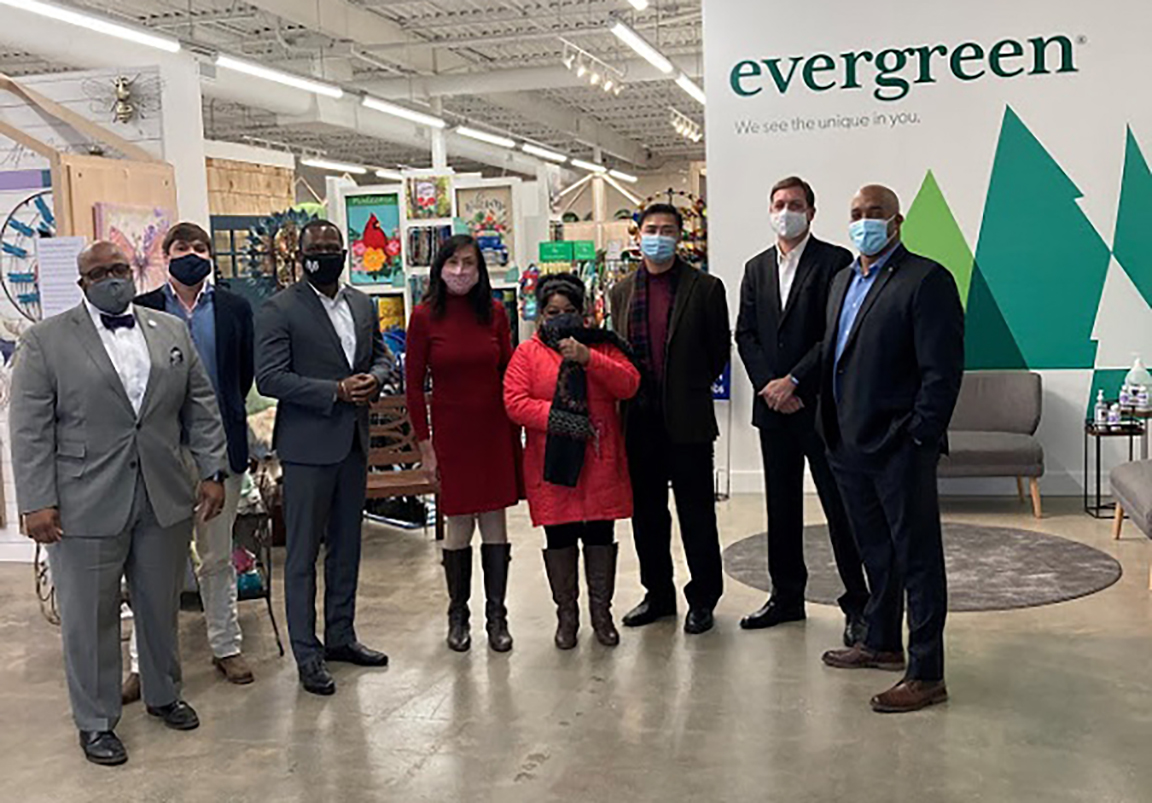 City administrators meet with Evergreen officials at its Southside headquarters. (Courtesy of the City of Richmond)

The City of Richmond will be facilitating the distribution of 200 outdoor heat lamps that Evergreen Enterprises donated for small businesses. The donation was made as more businesses are conducting business outdoors to ensure that they are observing social distancing regulations. Details on the distribution have yet to be announced.

Program participants will see their penalties and interest waived. However, amnesty does not apply to or reduce the principal tax amount due. Application details are to be publicized upon passage of an ordinance at the City Council’s Jan. 25 meeting.

The Richmond City Council meets Monday. Business on the 6 p.m. regular session consent agenda includes a request from Johannas Design Group to rezone about 1.1 acres at St. James and East Baker streets to allow multifamily and business mixed-use development. The request is tied to developer Charley Ayers’ plans to build as many as 120 market-rate apartments on the site near Gilpin Court. Full agenda available here.

Henrico supervisors meet at 7 p.m. Tuesday. Business on the agenda includes a rezoning and provisional-use permit request from HHHunt to add 35 acres to its River Mill development. The expansion would not change the total number of approved homes but would reallocate the totals for different home types. Part of the land involved includes parcels that the county purchased last year for a future school site. Full agenda here.

A UR grad with a degree in business administration, Schmitt is owner of RMC Events, which provides staffing for events and venues in central Virginia and other parts of the state.

Davis, Kelly-Wiecek to lead Hanover board; Holland, Winslow in Chesterfield

Sean Davis of the Henry District was elected chairman of the Hanover County Board of Supervisors for 2021. Angela Kelly-Wiecek of the Chickahominy District will serve as vice chair.

The Chesterfield County Board of Supervisors meets Wednesday. The full agenda can be viewed here.

On the agenda are two rezoning and conditional-use permit requests for residential projects by Better Housing Coalition. The housing nonprofit wants to build a 49-unit, three-story development on 3.5 acres of land at 3901 Stigall Drive. Separately, the nonprofit seeks permission for a 152-unit development on about 10 acres at 13916 and 13920 Jefferson Davis Highway.

Chesterfield County Department of Utilities received a AAA bond rating from Fitch Ratings, the county announced Friday. The department is one of “only a handful” of water and wastewater utilities to earn AAA ratings from Moody’s Investors Services, Standard and Poor’s and Fitch Ratings, according to a county announcement.

The Hanover County Board of Supervisors meets Wednesday. Full agenda here. The board is scheduled to consider a conditional-use permit request tied to a proposed events venue, which would be located on a nearly 12-acre property on Horseshoe Bridge Road, near the road’s intersection with West Patrick Henry Road.

The proposed venue, which has been working its way through the approval process for a while, would hold baby showers, bridal showers, family and church gatherings and birthdays. The applicant recently removed weddings from its list of events that would be held on the property, according to a staff report. The property consists of a home, a barn and three smaller barns.

Also on the agenda is a rezoning and conditional-use permit request that would pave the way for the second phase of Rogers-Chenault’s Hickory Grove development. The application proposes a multiuse development that includes 100 age-restricted townhomes on 51 acres on the north side of East Patrick Henry Road at Providence Church Road. A notice on the county’s website Friday stated that a deferral on a final verdict has been requested.