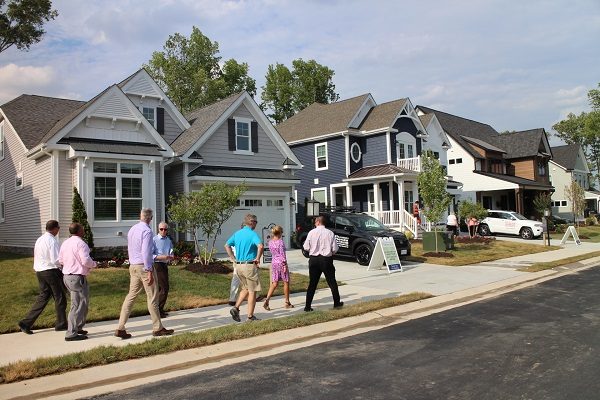 Builders and county officials tour the homes in this year’s Homearama showcase. (Photos by Jonathan Spiers)

One of HHHunt’s biggest projects in years has lured a regional home showcase event beyond its typical stomping grounds.

Construction is underway on the first section of River Mill, a 906-home development near Virginia Center Commons that is playing host to this year’s Richmond Homearama, the annual single-site spring home showcase put on by the Home Building Association of Richmond.

This year’s event, which kicked off over the weekend and runs through June 16, is the first to be held in Henrico County after several years in southwestern Chesterfield County. The showcase, which HBAR resumed in 2010 after a 16-year hiatus, has been held exclusively in Midlothian-area communities the past four years: RounTrey in 2015 and 2017, Hallsley in 2016 and Magnolia Green last year. 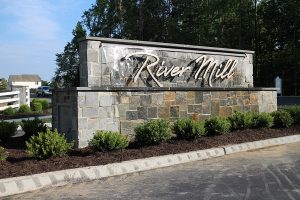 HBAR CEO Danna Markland said River Mill’s selection was due in part to its location and mix of housing product and price points. Totaling 250 acres off the west side of Brook Road, River Mill is planned for 356 single-family homes starting around $350,000, 265 townhomes starting around $250,000 and 285 apartments, rents for which have yet to be set.

“There is really nothing else like it in the region,” Markland said. “The location and product mix attuned to a broad base of market demand. The (80) combined townhome and single-family presales prove that demand.”

Since sales started in October via an offsite sales center, River Mill has sold 52 townhomes and 28 houses, said Jonathan Ridout, vice president of land development for HHHunt Communities. Development is underway on 316 lots including 165 townhomes and 151 house lots, the latter ranging from 55- to 70-foot lots.

HHHunt Homes is one of River Mill’s four homebuilders, each of which has a house showcased in Homearama. They include Glen Allen-based LeGault Homes, Midlothian-based LifeStyle Home Builders and Delaware-based Schell Brothers, which opened an office in Chesterfield after entering the local market in 2016. 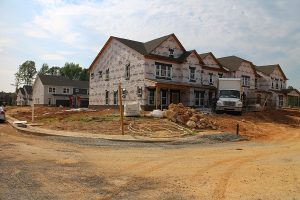 A section of homes under construction.

The apartments will be located along a new section of Woodman Road, which HHHunt agreed to pay to extend from its intersection with Greenwood Road to Brook Road, connecting with River Mill.

As part of the project, Henrico County is paying for a roundabout at Woodman and Greenwood roads at a cost of $5.7 million. The cost to HHHunt to pay for the Woodman Road extension, which will be built as a two-lane divided highway, is unclear at this point, though Ridout said early estimates put it at around $18 million.

HHHunt, whose developments in the county have included Wellesley and Wyndham, thanked Henrico for its part in the project and in River Mill overall with a tour for county officials of the Homearama homes last week. County Manager John Vithoulkas, deputy county manager Randy Silber and supervisors chairman Frank Thornton were among those in attendance.

Addressing the crowd at the start of the tour, HHHunt Communities President Kim Kacani said, “This is the largest public-private partnership we’ve had with Henrico County since Wellesley-Wyndham days.”

The arrangement comes despite an ongoing disagreement between the builder and the county over a contested connector road that HHHunt wants to link Wyndham with a planned community next door in Hanover County. The company’s appeal of a ruling last year in the county’s favor is to be heard by the Supreme Court of Virginia this month. 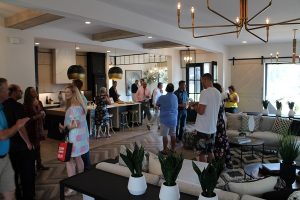 An interior of one of the Homearama homes.

Nonetheless, county officials were all smiles during the tour, which offered a sneak peek of the home styles and design trends showcased in the Homearama houses. Thornton, the board chairman, said the event is a welcomed addition to Henrico.

“I think it brings prestige to the county and to this community,” Thornton said, going on to describe River Mill as a worthy host site. “It goes to show you, for 250 acres, people have a lot of choices, which is a good thing. Affordability is one of the landmarks of all these homes being built here.”

HHHunt Corp. President Dan Schmitt – not to be confused with the Henrico supervisor Daniel Schmitt, who also took the tour – celebrated River Mill’s selection to host Homearama. Conversations with HBAR about hosting the event this year started in 2017, a year after zoning for the development won county approval.

Community amenities are to include a trail and park along the nearby Chickahominy River, a clubhouse, pool, and street trees and sidewalks. The development has been certified by Active RVA as a “fit” community – the first in the Richmond region to do so, HHHunt officials said.

The Homearama showcase is sponsored by CapCenter and includes various events for three weeks. Ashland brewery Center of the Universe Brewing Co. created a River Mill Lavender Pale Ale for the event. Details and ticket info are available on the Homearama website. 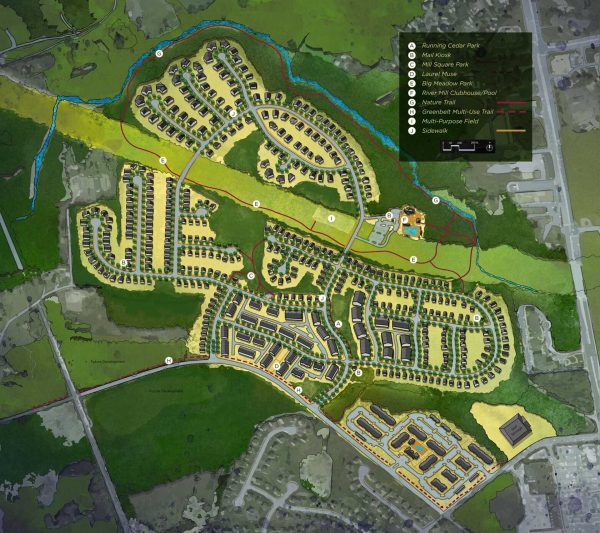 A map of the planned development on the west side of Brook Road near Virginia Center Commons. (Courtesy HHHunt)

Hope the increased rooftops can provide a shot in the arm to this area, but I’m thinking the ownership of Virginia Center Commons needs to go before things will truly return to good times for that area.

I never saw a mall fall so far so fast.