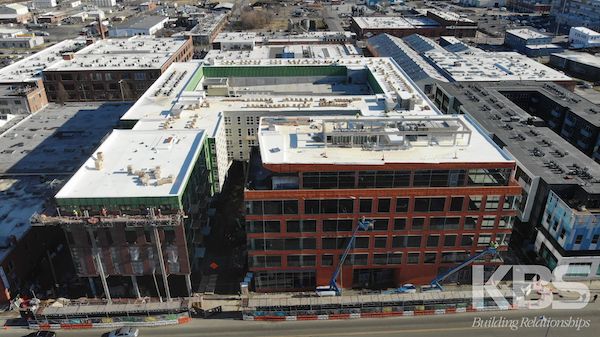 An aerial shot of The Current, which is going vertical along Hull Street in Manchester. (Images courtesy of Lynx Ventures)

The Current, the large mixed-use development from Lynx Ventures nearing completion in Manchester, has hooked its first big office tenant by way of the suburbs.

West Creek Financial will occupy the top three floors of the $68 million development at 400 Hull St. The company, which provides lease-to-own financing for retailers, will fill just under 35,000 square feet, accounting for about half of The Current’s available 70,000 square feet of office space.

Founded in 2014, West Creek has been one of the region’s fastest-growing companies in recent years, fueled in part by millions in venture capital. The company will leave its current office at 4951 Lake Brook Drive in Innsbrook.

West Creek President Boomer Muth said the firm was drawn to Manchester due in part to the view, access to the river and growing community. The new space will house West Creek’s 225 employees with room to grow.

“We can all agree 2020 was a challenging office leasing environment, but we had a feeling The Current would attract a high quality tenant,” Hosko said. 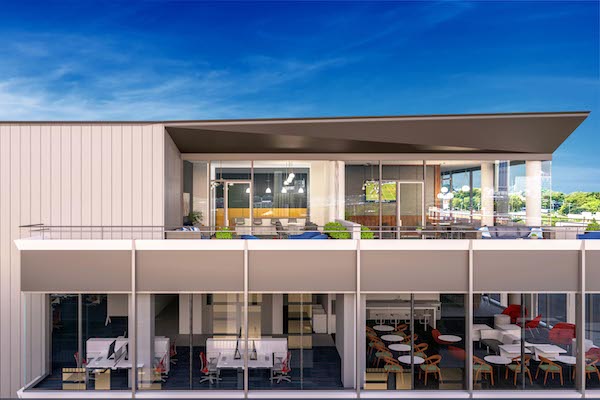 A rendering of The Current’s office space, which includes a rooftop terrace.

Even before the pandemic, Hosko said The Current’s office amenities were scheduled to include a rooftop terrace and outdoor courtyard, but they decided to add more things like showers and a bike storage room to help the project’s offices be better suited for a post-pandemic world.

“We’ve decided to build out showers in the office building so our tenants can bike or walk the trails nearby, then shower and go back to work,” Hosko said. “I think companies are leaning on their physical offices to give employees a reason to come back to the office.”

West Creek Financial is scheduled to move into the office by the end of the year. ENV is designing the office’s interior. Highwoods is managing the office space at The Current. Drucker & Falk manages the apartments. Gareth Jones and Jimmy Appich with JLL represented Lynx in lease negotiations. Wally Greeves with Kent Commercial represented West Creek.

The other aspects of The Current are moving along as well.

Hosko said next month Lynx will begin preleasing for the project’s 215 apartments, with plans for a summer move-in for its first tenants. 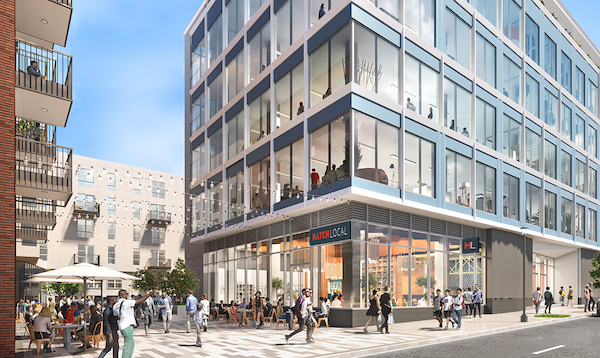 A rendering of the Hatch Local food hall at The Current, a mixed-use project at 400 Hull St.

On the commercial side, tenants have already begun signing on for Hatch Local, a food hall that inked a deal to open in The Current last fall.

Four of the food hall’s nine stalls have already been claimed.

Another stall will be taken by Fat Kid Sandwiches, a concept from Dunharrow Concepts’ Liz Clifford and Jon Martin, while a third will be occupied by Alex Bobadilla and Karen Negvesky’s Mexican restaurant Sincero.

A fourth stall will be a bar shared by rotating operators. 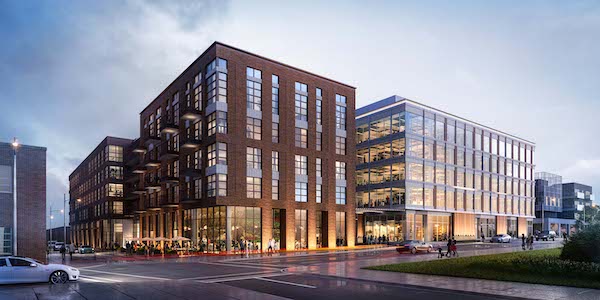 The Current’s residential and commercial side are pictured left in this rendering, with the office to the right.

About 3,000 square feet of retail space is still available, for which Hosko said they’re envisioning something like a fitness studio, salon or retail shop, but aren’t ruling anything out.

“Maybe it could be another restaurant. Many food halls are complimented by a somewhat more fine-dining restaurant,” Hosko said.

As The Current enters the home stretch, another nearby piece of Hull Street is in the early stages of redevelopment. Thalhimer Realty Partners is seeking to rezone a 2.2-acre plot across the street at 423 Hull St., a step that would pave the way for future development.

I travel thru Manchester often, marveling at the changes the years have brought to it. However, there is no more startling site there than the two acre presence The Current has on its neighbors. Its two acres of urban mass, tight up to the sidewalk, completely reorienting the feel of the Hull Street corridor. The streets seem narrower than before, with structures right in your face, rather than set back from the sidewalk. I have that same feeling on Semmes Avenue as I turn left from Cowardin, from the mass of The Jamestown Apartments, covering those three blocks to Railroad… Read more »

I’m loving every bit of this amazing metamorphosis of Manchester into a real urban neighborhood with fantastic density and intensity. As one of the real estate industry pros said at a forum last year, Manchester is becoming Richmond’s answer to Brooklyn (which happens to be one of my favorite places in the country). I think he’s spot on. It’s beautiful to see and I can’t wait for more!

if you haven’t traveled thru Manchester lately, you might try it out. The change is amazing.

I plan to tour this weekend. It’s been about 6-8 months since I’ve combed the streets. It’s very exciting to see central city locations urbanizing as the city keeps up and preps for more growth. Parks, riverfront, and transit will aid in our growth. Add equitability and we’ll have a good foundation for a great city.

Amen to that! This is so exciting to see – and I can’t wait to see what the next several years bring!

Hats off to Lynx for the vision and execution that brings about real change. It’s nice when big dreamers get to build their dream. Way to go folks. Can’t wait to see your next big idea!