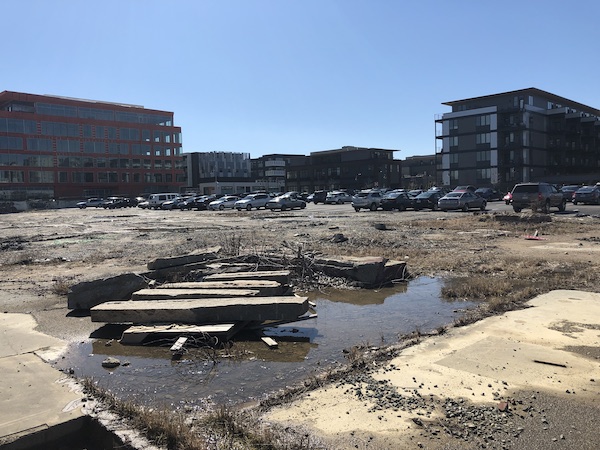 The 2-acre site is one of the last undeveloped sites along Hull Street east of Commerce Street. (Mike Platania photos)

With a major project nearing completion nearby and plenty of other activity in the vicinity, a large untouched plot in Manchester is being prepped for eventual redevelopment.

Thalhimer Realty Partners is seeking to rezone the 2.2-acre plot at 423 Hull St. from its current B-5 Central Business District designation to TOD-1 Transit-Oriented Nodal District, a relatively new zoning type that allows for mixed-use projects up to 12 stories.

TRP, the development arm of local commercial brokerage giant Thalhimer, bought the parcel as part of a $9 million deal in 2013 that kicked off its redevelopment of the former Reynolds South plant. The site is adjacent to the residential part of the project, City View Lofts, as well as Lynx Ventures’ office, retail and residential project The Current.

TRP principal Matt Raggi said this is the second time the firm has looked to rezone 423 Hull St. 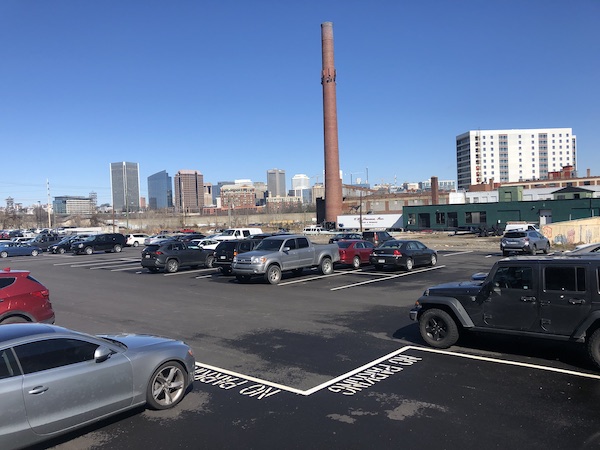 Located just a few blocks from the Mayo Bridge, the site is currently used as a surface parking lot.

“When we rezoned the property in 2016 to B-5, the city had not yet adopted TOD-1 and this zoning district is more in line with where the Hull Street corridor is headed,” Raggi said, adding that the new zoning would also put it in line with the city’s recently-adopted Richmond 300 master plan.

“We don’t have any immediate plans for redevelopment at this time but we believe the city’s planning objectives are in line with our future plans for the property,” he said.

TRP submitted the rezoning application in late February. The matter is not yet listed on a Planning Commission agenda.

In the meantime, TTP is getting ready to welcome three new tenants into City View Marketplace.

Raggi said work is wrapping up on the Giavos family’s Continental Manchester and Stella’s Grocery, along with a Virginia ABC store. He expects the three to open sometime in the late spring or early summer.

The firm also has plenty going on north of the river. Last week, the city’s Planning Commission gave the thumbs up to a rezoning request from TRP for a site on Arthur Ashe Boulevard across from The Diamond. TRP is also working on a 126-unit apartment building along Belleville Street in Scott’s Addition.

Things are moving fast in Manchester. Several new apartment communities are ready to break ground. Some new sites are reaching the market. This two acre lot has always been the one on which the community pinned its hopes for a 20,000 sf full service grocer. I know Thalhimer has tried hard to land one. Does the TOD allow this hope to continue or does it signal the end of that hope at this location? Regardless, exciting changes are afoot in this bustling new community of Old Manchester. And the bigger question, how many people know who Dave Brockie was and… Read more »

Do you mind listing those developments that are about to break ground.

I love that he makes the Google map. True Richmond legend.

Dave was the lead alien of GWAR! He once told me that Frank Zappa mentioned GWAR! In Rolling Stone magazine. “He said my songwriting sucks. Man, I was so happy! Frank Zappa knew our stuff!” I told him “but Zappa is right, Dave, it does suck.” “Yeh I know , but he said so in Rolling Stone.”