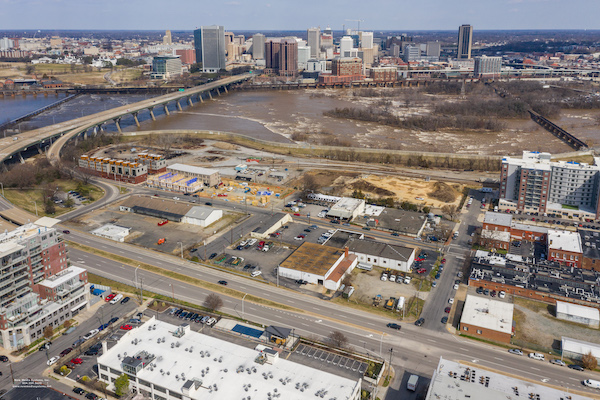 The nearly 2-acre parcel listed for sale Monday is seen center right, with buildings that have a white facade and brown roofs. (Courtesy of Bruce Commercial Realty)

Another sizable piece of Manchester could be in line for redevelopment.

The headquarters of Thurston Spring Service at 701 Perry St. — which encompasses an entire city block — was listed for sale Monday.

The roughly 1.8-acre assemblage is bounded by South Ninth, McDonough, Perry and West Seventh streets. The Thurston family, which has operated their suspension-focused auto shop for 110 years, has owned the bulk of the land since at least the 1980s.

The only piece of the 6-parcel assemblage that isn’t owned by the Thurstons is a one-third-acre lot at 326 W. Seventh St., which is owned by the Condyles family and used as a parking lot by Legend Brewing.

Local broker Bruce Milam, now operating his own one-man shop, has the listing with his former colleague at Commonwealth Commercial, Chip Louthan.

Milam said a combination of factors is motivating the Thurstons to sell, including the red-hot market in Manchester where land has sold for as much as $4 million per acre.

“Just like in Scott’s Addition, a lot of small businesses are sitting on valuable real estate,” Milam said. “I figure they can hold onto it for 5-to-10 more years and still be in a good spot because the location is so strong. But it’s a matter of when do you want to cash out and move on, and buy your house on the island or the ranch in the mountains.”

The land is zoned for up to six stories and is in a federal Opportunity Zone, a designated area where new development can get preferential tax treatment. The property doesn’t have a listed asking price. 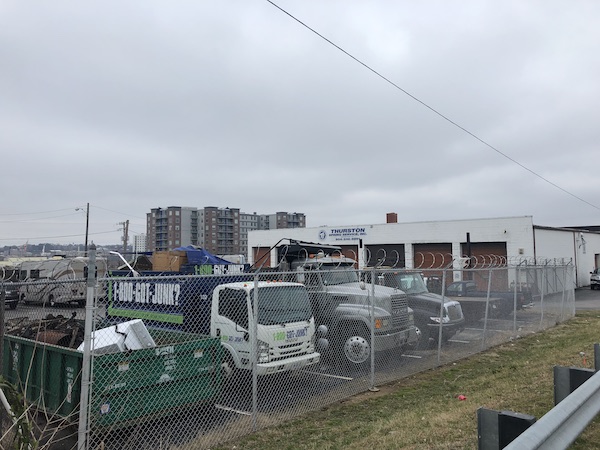 The land is used by Thurston Spring Service, which has owned it for decades. River’s Edge, a new apartment tower, is seen in the distance. (Mike Platania photo)

“We’re going by what we’ve seen out there and advising based on what we’ve seen in other sales,” Milam said, adding that they’ve solicited offers for it from developers.

Milam added he believes the Thurston family business will relocate and continue operating if the Manchester land sells.

One block to the east of the Thurston property is an old Taylor & Parrish Construction office that’s owned by the firm’s former co-owner Brent Graves. His plans for the 1-acre plot include over 200 apartments and 25,000 square feet of commercial space that has drawn the interest of grocers.

Graves said his project, while still in the early stages, is moving along, albeit slowly.

“Our desire is to try to identify a commercial or retail tenant as part of the development,” Graves said. “Because of the circumstances, it’s a bit harder to do that until we get more people vaccinated.”

Developers from out-of-town are staying busy near the Thurston property as well.

South Carolina’s The Beach Cos. is working on a mixed-use project at 700 Semmes Ave., located directly to Thurston’s west.

The Beach Cos.’ Timothy Cotter said they’ve tweaked the initial project’s design slightly, bringing the number of units down to 221 from 230 and increasing the number of planned parking spots to 338 from 221.

“We’re hoping to break ground in the summer so we’re working toward that right now,” Cotter said. “Our plan of development, we hope, will be approved this month and the current building there should be demolished by end of April.”

This is exciting news for the continued mega-growth of Manchester! If Bruce is involved, you know it’s good. Hopefully whoever buys this great parcel and develops it can get it upzoned to at least the TOD-1 zoning to get building height up to 12 stories (from the current six) – or perhaps file for a SUP if they want to go higher. Other proposed projects in the immediate area are designed to go vertical (twin 11-story residential buildings one block north on the riverfront, and a residential building up to 16 stories in the next block east on Cowardin, between… Read more »

Correction: The 16 story building would be situated on Cowardin Avenue between Perry and Porter streets. I have no idea where I got 6th & 7th streets from. Total senior moment on my part!

Correction #2 – Commerce Road – not Cowardin Avenue. My brain just is not working today!!﻿