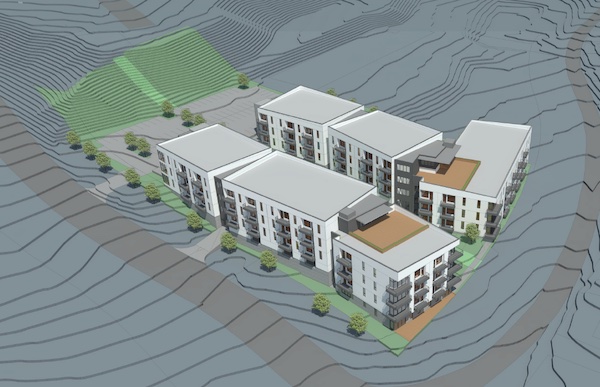 The $20 million development is planned to rise at the corner of Government Road and Glenwood Avenue. (Courtesy of Daniil Kleyman)

A vacant piece of land downhill from Chimborazo Park will be the site of new of Daniil Kleyman’s latest project.

The local developer is planning a pair of three-story, mixed-use buildings that would add 122 apartments at 3800 Government Road in the East End.The roughly $20 million development includes 56-unit and 66-unit buildings to rise east of Chimborazo Park and north of Gillies Creek Park.

Kleyman bought the 2.5-acre parcel for $830,000 in late 2016 and has been holding it ever since. Kleyman said the project’s total size will be 3 acres after he purchases a vacant alley and street from the city.

“For a long time this site was a trailer park until it was dismantled sometime in the early 2000s,” Kleyman said in an email. “Overall this has been a rather neglected and under-served part of town right at the edge of Church Hill so I am excited to add some high quality housing to this area.” 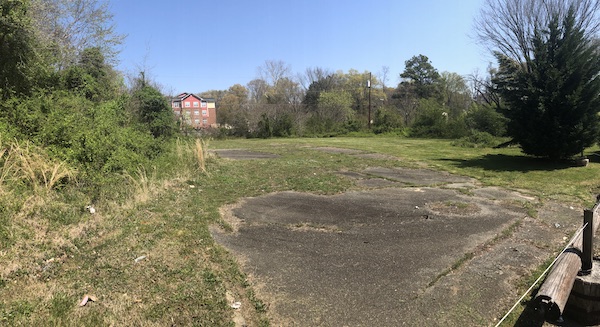 The 2.5-acre parcel was once a trailer park but has sat vacant for about 20 years. (Mike Platania photo)

Kleyman is familiar with the neighborhood. He and fellow developer Matt Jarreau are looking to wrap up work in January 2022 on an infill project on a triangular lot in Union Hill. Kleyman said Jarreau isn’t involved with the Government Road project.

“This project has been on the backburner as we finish some other developments but given the housing demand right now, it’s a great time to finally get this going,” Kleyman said.

In addition to the apartments, the 94,200-square-foot project will include 1,500 square feet of commercial space. Of the 122 units, 85 will be one-bedroom or studios, with 34 two-bedroom and three three-bedroom units planned.

A pair of 3-story buildings are planned for the development, which would add a total of 122 apartments. (Courtesy of Daniil Kleyman)

“We are probably leaning a little higher towards two bedroom units than most projects, though not by much, and that’s due to what we see are shifting demand trends in the market,” Kleyman said. “More people working from home means our tenants need more space. Whether that’s for home offices, guest bedrooms, or just ability to take on roommates, I think two bedroom units will see solid demand going forward.”

Amenities at the project would include a pool, fitness center and rooftop decks on each building.

Plans call for 151 parking spots, 46 of which would be split between the ground floors of each building. The remaining 105 spaces would be on an adjacent surface lot.

Kleyman said he’s looking to break ground in spring 2022 and that an 18-month buildout would follow.

Correction: The development will total 94,200 square feet with 1,500 square feet of commercial space. An earlier version of this story reported a smaller total that was incorrect.

What a great product offering in a key location! I always appreciate well thought out developments and can’t wait to see the final product!

I’m sorry, but as a former resident of Glenwood Avenue, I don’t get this project at all. It’s in a terrible location. It’s hard to access the interstate or major roads. There is no retail within walking distance. There are no sidewalks and the roads are terrible. I feel sorry for future residents.

Garry, I’m not sure how long ago you lived on Glenwood. But there is a sidewalk now that comes from N 35th St down Glenwood to the new Glenwood Crossing apartments adjacent to this parcel. The sidewalk does dead end at this parcel discussed in the article. But if the developer needs the city to sell him a vacant alley to move forward then they can probably make extending the sidewalk on Glenwood to Government road a condition of the terms. Sure the area isn’t walkable to much retail. But follow the new sidewalk up Glenwood for 1/4 mile and… Read more »