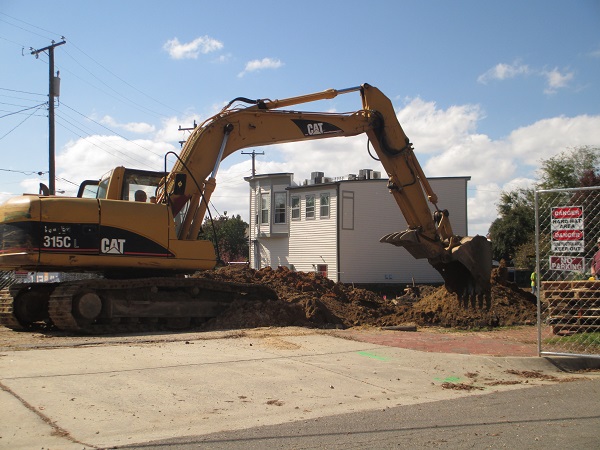 Site work is underway at the triangular lot at Jefferson Avenue and 24th and M streets, where an existing building was previously renovated. (Jonathan Spiers photos)

Three years after the project was initially approved, a scaled-down version of a mixed-use development beside a prominent neighborhood crossroads is getting going in Union Hill.

Site work has started on a 21-unit apartment building with street-level commercial space at 2416 Jefferson Ave., a triangular-shaped lot beside the 25th Street roundabout that’s home to The Roosevelt restaurant and Sub Rosa Bakery. 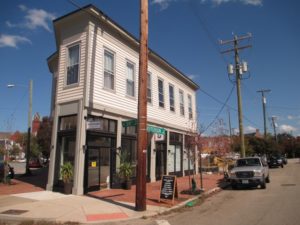 The building at the corner of Jefferson and 24th Street includes apartments and retail space.

At two stories in height and 20,800 square feet in size, the project is half the size of the 3½-story, 45,000-square-foot structure that developers Matt Jarreau and Daniil Kleyman originally envisioned for the site. They said construction cost estimates after the project was approved in 2017 required the building to be scaled down from its initial 27 apartments and 12,000 square feet of commercial space.

“We’re still taking a little bit of a risk by building commercial space right now, during a time when it’s more than a little bit challenging to lease commercial,” Kleyman said. “But if you’re going to be in Church Hill, that is the location you want to be in: right on Jefferson Avenue, right on that block with a number of other great businesses.”

The building will now house a mix of one- and two-bedroom market-rate apartments above 5,000 square feet of commercial space, about half of which is spoken for. Jarreau’s GeorgeRVA real estate group is set to take a storefront along Jefferson Avenue, and he and Kleyman recently signed Spotty Dog Ice Cream to fill a space with its first brick-and-mortar location. 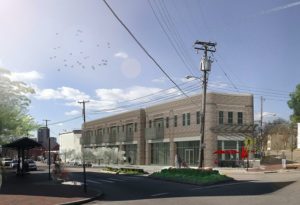 A rendering of the scaled-down building. (Image courtesy of Daniil Kleyman)

That leaves a 2,000-square-foot space fronting the roundabout that Kleyman said is being marketed for a restaurant tenant. Thalhimer’s Reilly Marchant is handling leasing for the space.

M.L. Bell Construction is the contractor on the project, which follows the recent demolition of a one-story office building on the site and the renovation of a remaining building at the corner of Jefferson and 24th streets. Kleyman and Jarreau used historic rehab tax credits to renovate that building into apartments and ground-floor commercial space that’s now home to 3S Yoga and North End Juice Co.

The developers paid $345,000 for that building in 2017 and $182,500 a year earlier for the rest of the triangular lot, city property records show. Jarreau previously put the cost of the building renovation at above $500,000. Kleyman would not disclose the cost of the new construction.

The apartments will range from 670 to 1,150 square feet. Kleyman said rental rates have not been set. 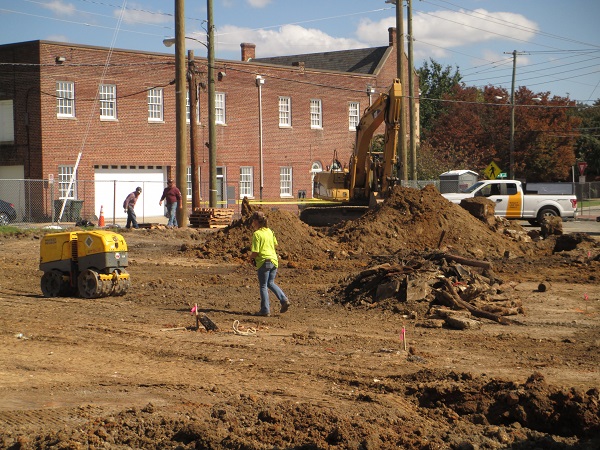 M.L. Bell Construction is the contractor on the project. (Jonathan Spiers photo)

“That entire stretch of Jefferson Avenue, by the time this project is finished, is going to be very walkable, very amenity-filled,” he said. “We’re pretty excited about filling that gap along the corridor.” 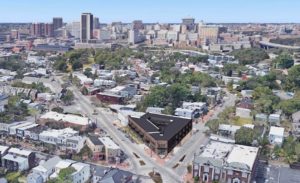 An aerial rendering shows the building in relation to the neighborhood. (Image courtesy of Daniil Kleyman)

The project is the first collaboration between Kleyman and Jarreau, who met while eyeing the same real estate in the neighborhood. It’s also the second triangle-lot infill for Jarreau, who developed a comparable building at 23rd and Jessamine streets.

Kleyman also is wrapping up a 14-unit apartment project at 30th and Q streets in North Church Hill. He said those units are fully leased, with ground-floor commercial space still available.