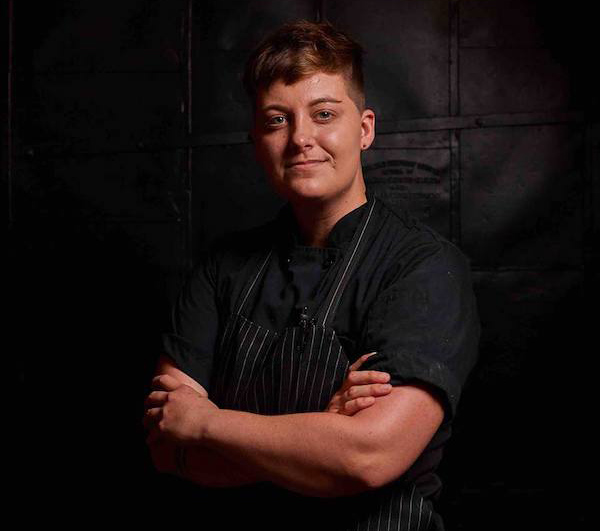 Oro, a pasta concept founded by Laine Myers, has signed on to occupy a booth at Hatch Local, a forthcoming food hall in The Current at 400 Hull St. (Photos courtesy of Oro)

The roster of a soon-to-open Manchester food hall is continuing to fill out, with a former Nota Bene chef joining the fray.

Oro, a pasta concept founded by Laine Myers, has signed on to occupy a booth at Hatch Local, a forthcoming food hall in The Current at 400 Hull St.

Myers is a veteran of the local restaurant scene, having worked at Metzger Bar & Butchery, Graffiato, and most recently Nota Bene in Shockoe Bottom until its closure late last year. She’s been operating Oro as a pop-up concept offering fresh pasta and vegetable dishes.

“I climbed the ranks over the years,” Myers said of her time in the industry. “I got in at good places and was a sponge of absorption for information.” 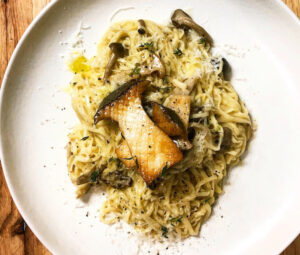 In fall 2019, she founded Oro as a side-project while still executive chef at Nota Bene. Myers said juggling Oro while also working full-time was tricky, but a few months into the pandemic she decided to use the downtime as a catalyst to go all-in on Oro.

“In the beginning of the pandemic, my mind was on, ‘Where is my career going, what’s my next move?’” Myers said.

“I noticed this massive influx of people, particularly young people, who’d been thinking to themselves that it’s now or never with their concepts. Then I hopped on the bandwagon. In some ways the pandemic was kind of a catalyst for me to commit and go full speed ahead.”

Since January, Oro has been running pop-ups more frequently and often selling out. Myers has been using Hatch Kitchen as a home base, and eventually Myers decided to sign on for Hatch’s food hall.

Founded in 2018, Hatch Kitchen is a commissary kitchen and food and beverage incubator space in Lynx Ventures’ Clopton Siteworks development. The food hall is an offshoot of the Hatch brand. 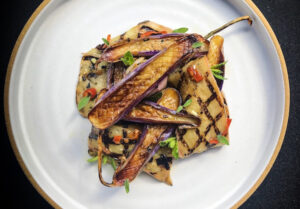 In addition to pasta, Oro also focuses on vegetable dishes like this eggplant salad.

Oro’s menu as a pop-up has been rotating and features some niche pastas such as orecchiette, fazzoletti and corzetti. For the food hall, Myers said she intends to simplify the menu a bit.

“We want the creativity to be high but also want to have some staples on the menu,” Myers said, adding that Oro will likely have rotating seasonal dishes. Oro also intends to get into selling packaged pasta at retail establishments.

Hatch Local is leasing 9,000 square feet in The Current, which is being developed by Lynx Ventures. The food hall will have nine stalls, three of which will be occupied by a coffee bar, a booze bar and retail shop.

In addition to Oro, three other food vendors have signed on: Buttermilk + Honey, a fried chicken sandwich shop from Mike Lindsey; Fat Kid Sandwiches, a sandwich concept from Liz Clifford and Jon Martin; and Sincero, a Mexican restaurant by Alex Bobadilla and Karen Negvesky.

Hatch Director of Operations Shannon Conway said they’re in discussions with two other prospective vendors and hope to have those deals finalized later this spring or summer.

The Current also recently inked a deal for a sizable chunk of its office space. Last month, West Creek Financial signed on to move its headquarters to The Current with a 35,000-square-foot office lease.

It all sounds delicious – can’t wait to check it out!