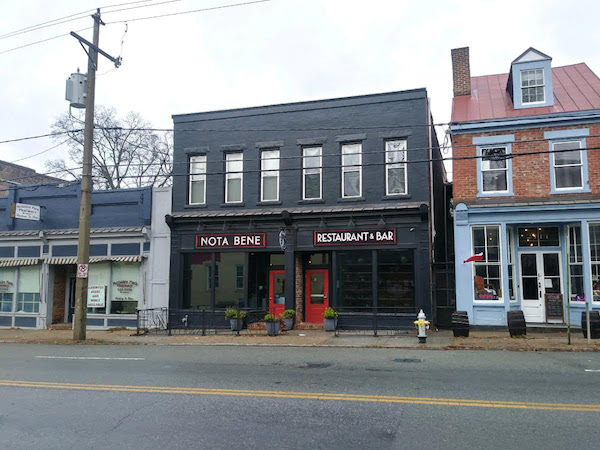 Even with a pivot away from dine-in service to a takeout model, Nota Bene couldn’t outlast the coronavirus pandemic.

The five-year-old Shockoe Bottom restaurant, which started as the Pizza Tonight food truck, ceased operations Sunday as owner Victoria DeRoche seeks a buyer for the business.

DeRoche, who opened the restaurant at 2110 E. Main St. in 2015, said the switch away from sit-down service to a market concept offering to-go and delivered meals and wine and beer brought in some revenue, but not enough to sustain the business as the pandemic lingers.

She said a major blow was missing out on the federal government’s Paycheck Protection Program, which she attributed to a clerical hold from a separate SBA loan she had been working on and being unable to contact the agency to resolve the issue.

“I did not have that to fall back on. That is 100 percent why this is not working. It would have been $82,000 and there was an issue with a pending loan from the Small Business Association that was attached to my tax ID number, which prevented me from getting PPP,” DeRoche said. “I applied twice and I wasn’t able to communicate with the SBA in time to meet the deadline. I did not receive it and I could not survive without it.”

The federal aid program collected its last applications in early August. The next month, DeRoche opened Nota Bene Market, the successor to the five-year-old Nota Bene Restaurant and Bar. The restaurant had been temporarily closed in response to the pandemic since March. Nota Bene closed for good on Sunday.

“Right now, what you can’t mitigate are peoples’ thoughts about the virus. Whether they believe in it or not, whether they wear a mask or not. They weren’t really given a choice here because it was take-out only,” DeRoche said. “For a lot of places that I know personally that have been struggling, we did not have the same problems and we were doing relatively fine, but I had to keep going into personal money to round it out and I just couldn’t do it anymore.”

DeRoche is currently seeking a buyer for the business, which has an asking price of $65,000 for the restaurant’s equipment, business license and ABC permit. The restaurant leases a roughly 2,000-square-foot space on East Main Street.

DeRoche said she plans to take some time off before she considers her next move. She said she probably won’t jump back into the restaurant industry, but she felt Nota Bene itself is in a good place to continue under new management.

“I think that where we are is a lovely spot. There’s Bryant’s Cider next door, Whisk (bakery) is on the corner,” she said. “I think it’s a thriving area, especially when it isn’t in the middle of a pandemic. Right now it’s tricky, but I do think there’s opportunity — especially with the vaccine on the horizon.”

The market concept is one that’s been catching on locally during the pandemic. Fellow restaurateurs Steven Gooch and Evan Campbell have designs on such an idea at Libbie Mill Midtown, motivated by Stella’s Grocery, which also plans to open a new location in the Libbie-Grove area.

She is selling her non-transferrable ABC license as part of the deal?? Did they change the rules because the pandemic or does she plan to stay a part owner?